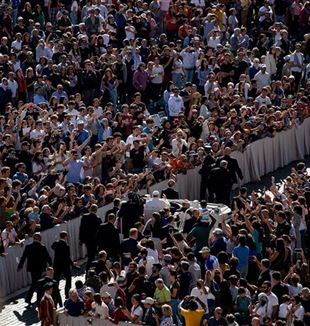 I am 57 years old; I grew up and have been in religious circles for as long as I can remember, starting with the Franciscans, then the Salesians, then some circumstances in life led me into a fluctuation between distancing myself and drawing closer to God. One day, when I thought I was on a path of my own, I met someone who spoke to me in a different way, who offered me another gaze at life, and who turned a question around that I often ask myself: "Why me?" and she asked, "Why not me?" She then talked to me about a group that she is a part of, that she feels a part of, this movement that is her family. Every time she speaks about it her face lights up. She perceived my amazement and gave me an invitation for the Audience with the Pope for Fr. Giussani's Centenary. I accepted it happily even though I thought that I would be participating in a commemoration like so many I have already taken part in.

I arrived in St. Peter's Square and saw a sea of joyful people. I got chills on a day of scorching heat and sun, and I did not understand why, but I feel like a participant, no longer a guest. After a while morning prayer began, the songs and Fr. Giussani’s voice who seemed to be speaking to me among the 60,000 people present. He said to me: you are free to do what you want, you have no vetoes, no limitations, but if you want to be happy with what you do, do it in the company of Jesus because He believes in you and your happiness. Then the Holy Father spoke; I had never heard him be so direct, so enthusiastic. I was struck by every single word; I was especially struck by his invitation not to waste time either for oneself or for others, to believe in good and in doing good, to enjoy the gift of life.

Today, 48 hours after the event, I have two certainties: the first, is that I no longer feel I am on a track of my own, but in a long train filled with joyful people, with the desire to live in harmony. The second, is that this Centennial invitation was the most beautiful gift I have ever received.