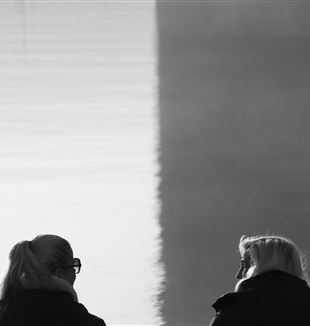 In the past several months I have been involved with my parish in the Synodal process. A couple of months ago we had a large gathering with the Bishop and all the faithful of the local parishes willing to participate, where I was involved as a facilitator of one of the discussion groups.

The first thing that really struck me was to find more than 300 people who were interested, like me, to be involved in the process. “Why are they here?” I immediately asked myself. What makes them invest a night of their work week to meet at the parish to discuss the Synod? During the night I once again realized that what unites us is more important and attractive than any idea each one of us shared.

In my discussion group we had fourteen people coming from different parishes and we were asked to have a dialogue on various questions the Synod committee suggested.

At the beginning of the meeting, I was really afraid of the whole situation: I did not know anybody, what people were going to say, and what arguments could arise, because those conversations can easily become a moment of complaining without much dialogue.

The first few minutes confirmed my fears: a few people immediately expressed their concerns and complaints regarding COVID and how the different parishes handled it, and the discussion became so heated that one person decided to leave.

Before continuing the dialogue, we took a moment of silence, to re-read the questions and try to focus again on what we had been asked. What happened afterwards really surprised me: not because people changed their minds, nor because the contributions became less controversial, but because the more we were talking, the more everybody (myself included) opened up to listen to the other, even if he or she did not agree with what had been said.

I found myself not afraid anymore of what people could share, but curious and open to listen to the other person, whatever he or she was saying, as a contribution and a provocation to grow deeper in my life and faith, now. One person shared that today it is unlikely that people talk anymore about topics they disagree on and was wondering if this was the case also for us. It struck me that what was happening in front of my eyes was exactly the answer to that concern. My fears were gone and I was completely taken by an event of an impossible communion and unity that was happening there, among the same people with whom there was so much tension at the beginning. Who are you, Christ, who can change our heart of stone and transform it into a heart of flesh?

Read also - "It is I who received from you"

At the end, people had to share a word to summarize their experience that night and when I read what they had written (“hopeful”, “changed”, “relationship”), I found described my same experience of being changed and attracted by the event of Christ happening in front of me and in me.

What I am discovering, which was deepened by this experience, is that I need to beg for the event of Christ to happen in front of me, I need to leave Him the space to take initiative in my life. I do not need to be in control, but to open up my heart to reality, begging for His presence and His mercy to embrace me. At the same time, I was amazed by our Bishop, who did not fear the freedom of the people, because we are the people of God who have been chosen by Christ himself to walk together.