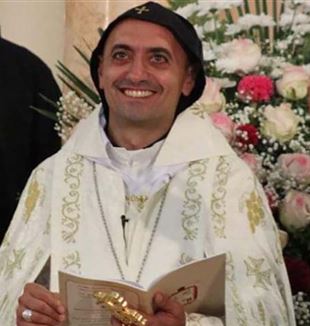 At the end of May, the Spiritual Exercises of the Fraternity of CL were held in Lebanon. A small group of friends gathered in the seminary premises of the Syriac Catholic Church in Daroun, next to the Cherfe Monastery. The person in charge of welcoming the participants (gathered together with Fr. Filippo Belli, a priest from Florence who has been accompanying these Lebanese friends during the Exercises for years, along with Rony Rameh, head of the community who translates them into Arabic) was Fr. Jules Boutros, , an athletic 39-year-old Lebanese man in jeans and a sports shirt, who until three days before had been rector of the seminary. In fact, receiving them with open arms and almost embarrassedly, Fr. Jules informed his Cypriot friends – the first surprise – that the Synod of Bishops of the Patriarchal Church of Antioch of the Syrians (Lebanon) had elected him bishop of the Patriarchal Curia and that Pope Francis had accepted his appointment.
Thus we expected that Monsignor Jules, after welcoming his friends with his usual warmth, would retire to the curia or go to his seminarians, but instead – the second surprise – he showed up on Friday evening in the meeting room with his notebook and from then on, for the three days, he did not leave our companionship for a single minute. Helped by his excellent knowledge of Italian, Monsignor Jules did not miss a word of the lessons.

On Saturday evening he also agreed to give a testimony about the story of his vocation. It was an intense and moving moment, where he retraced the stages of a life full of unexpected changes. From the first steps of the faith lived in his family and the birth of his vocation, he experienced a decisive turning point at the moment when, having received the philosophical-theological formation necessary to enter the priesthood, he found himself at a crossroads that the Eastern Catholic Churches present to their candidates for the presbyterate: the choice between the celibate priesthood and the married priesthood. This was not an easy choice for a man engaged in an emotional relationship that would have lead perfectly to marriage. But Jules opted for the total gift of self.

And his encounter with CL? During his years of study in Rome, where he earned a doctorate in pastoral theology at the Salesian Pontifical University, a group of young priests who belonged to CL caught his attention. Returning to Lebanon, where he was unaware of the existence of a small community of the movement, and threw himself into his pastoral work with young people, becoming head of the Catholic university ministry. In this role, he was invited to participate in the youth synod in Rome in 2019. There he met friends from the CL International Center, and a Swiss friend who follows the Lebanese community met him for dinner. "That person had come from far away just to meet me," recounted Monsignor Jules, still full of surprise three years later. "He asked me if I could 'lend a hand' to his friends in Lebanon and gave me their contact details. This time, as soon as I returned, I did not want to miss the opportunity and I actually received that ‘hand’ from them. I am now on a path to get to know the charism of CL in depth, which fascinates me. Whenever I can, I participate in the School of Community and other gestures of the movement."