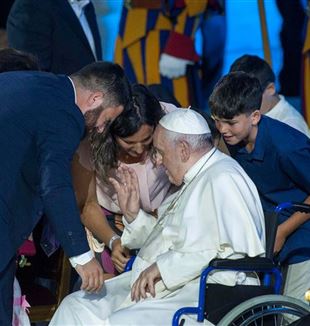 It was with great surprise and gratitude that I was invited with my family to attend the 10th World Meeting of Families that has just concluded. As is often the case, reality far exceeded my expectations.
It was an opportunity to get to know the friends from the movement who came with us (Fernando and Carolina from Argentina, Margaret from Ireland, Roberto, Fr. Sandro, Alessandra, Giancarlo and Letizia from Italy), but also to see all the people of the Church who came to Rome to the Pope from all over the world. Families of all nationalities who came to listen and witness to what they hold dear.

They were days of intense work, where so many family-related issues were addressed through testimonies and stories. It was a long succession of experiences: faith, hospitality, joys and struggles, sin and forgiveness, charity and mercy.
What struck me was to see how, beyond the good attempt to try to be ever closer to families, trying to respond in new ways to the needs that emerge, the Mystery responds with facts, that is, with people capable of being present in new ways in the context in which they live. Presences that disrupt the environment.

There were so many testimonies on this, but some struck me most of all: Chiara Corbella's parents, Zakia Seddiki (wife of Luca Attanasio, the Italian ambassador killed in an ambush in Congo in 2021 during a humanitarian mission), Gigi De Palo and his wife Annachiara, Danny Abdallah and his wife Leila. These were incredible testimonies where you could see the Mystery at work, because it is impossible for human beings to say certain things, to say them in that way and with that gaze, without the Mystery being involved. You could also tell by the silence that was generated during their speeches: we were all tense and moved to listen.

Read also - "It is I who received from you"

It is always an attraction, wonder that moves the human heart and helps it to live within every circumstance. As one of the families who spoke recounted, "We are not good. We are not a model family. We are simply one of the many families who said yes to life, not because of an ideological issue, or because our parish told us so, but because it was beautiful. There is nothing to it: beauty is what drives us to do things. It is because of beauty that we are Christians."