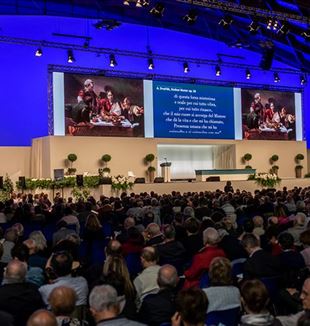 I have decided to join the Fraternity of CL. I have been out of college for a few years now, but have always put it off. Since I got to know the movement, although I participate in community life, in gestures, I have always been allergic to joining anything, partly because of my anarchic soul and partly because of my difficulties in bonding. Thus while I am always there, I have never signed up to School of Community or anything else.

Last week, I was talking to a friend of mine about the state of the movement, the various developments, life in general, and I was listing a number of my objections and questions. At a certain point, he said to me, "Simone, you are 28 years old, you have to decide whether or not to stay, whether to completely say 'yes' or 'no'." He is a researcher like me and therefore shares my same difficulties, fears, loneliness, sentimental issues. But in front of me was a man who had been built up over the years by his willingness to embrace the movement.

It was like a rock that triggers an avalanche: it made me look at my own difficulty in adhering with my whole self. I have always wanted to keep a ready foot out, an escape route from a total connection. It forced me to look back at my life, at the people I have met. And especially to these last few months, which despite my doubts that reality can be positive, are beginning to be peppered with relationships.

First of all, this happened with some friends from my School of Community, with whom –often after only a short time - an inexplicable familiarity and goodness has arisen; they have accompanied me in facing some issues and have followed me step by step. A series of things have happened that, in spite of my cynicism or intellectualism, always put me in front of the book Is It Possible To Live This Way?, which I reread continuously and that is perhaps the dearest thing I have at this moment: "One of Tom’s students was hanging out with us in CL for a while. He was invited to the wedding of someone in the community in Bologna. He left the church telling Tom, ‘do you realize I feel at home for the first time?’ ‘At home?’ ‘I feel at home for the first time! I understood why my classmate is wrong: because he presumes’ – and he was speaking of the most intelligent guy in the class – ‘to discover things through his powers of reasoning; he thinks he can reason his way to the truth. But instead, truth is discovered, but surprise, in one moment, in a determined moment.”

Thus, I always said to myself, when the time comes to join the Fraternity, something strong will happen that will make me realize it. Instead, I realized that it was already there: that freedom is firstly the choice to embrace, to leave my shell of self-determination and defense from reality. And it makes me smile that this is happening right now at this moment in the life of the movement.