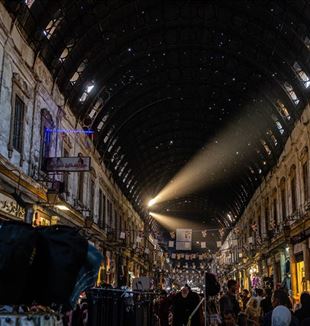 "Unexpected" and "hope" are two words that, for me, describe Syria and my personal history with this country very well. Through a series of unlikely acquaintances - yet not uncommon in the experience of the movement - we had met Soulaiman in Moscow, a Syrian doctor who had come for an internship in Russia when the war broke out.
Due to a series of events and signs, eight years later I found myself at his home, in Damascus, for the CL Beginning of the Year Day. In a room where three of the four walls were occupied by sofas – as is customary in all the houses here, where people gather to have tea and coffee, or to chat – was Soulaiman with his wife, me, who am Russian, and Jean-François, a Belgian, both from Moscow. Fadi, Soulaiman's friend, was also there with his daughter and – yet another unforeseen event – Michela, another Italian friend of the movement, who moved from Beirut to Damascus for work, whom we met a few days ago.

Jean-François gave a short introduction, then we listened to Fr. Giussani. Right now in Damascus there is no electricity as it has been rationed to a few intervals during the day, but Soulaiman prepared a large battery-operated screen so that everyone could read the text in Arabic without any issue. Hearing Giussani's powerful voice filled me with gratitude, especially because I realised how true it is to what I feel, that even if "all of space, the whole world” with all its misery, problems and failings, "came crashing down on me, upon this ephemeral point…I am greater." I looked into the eyes of my Syrian friend, and it was clear that everything stems from an "I" that has been struck, touched by an encounter in which they felt a promise for their life, an "I" that does not stop and never ceases to search.

This search began immediately, as soon as we finished listening to Fr. Giussani, when our friends put before us the wounds and the deepest questions they have: "Why do good people have to die, while bad people live?"; "why has the Lord allowed my son to go to university in another city, far from us? How can I bear the pain of separation?"; "How should I react if a neighbour treats me badly? Why is there injustice?"; "How can I live the experience of the movement here, in Syria, where there are no friends to help me and where I cannot see your eyes?".

How many answers might we find in the many passages of the Gospel or in Giussani's texts, but God's imagination is truly amazing. Michela, there almost by chance, told us that she is a mother of two children who are currently living in London, in a much less safe 'jungle' for young people from a Syrian village who are far from conflict. As she shares her grief over their separation, she says with certainty: "My children are not mine, I have to let them have their freedom. Loving them is all about letting them go and letting them live their lives.” These were not just words, you could see it in her face, and as she recounted this, Soulaiman's wife's gaze changed, as she has been worried about her son for weeks. I cannot say whether she has got over her worry, but she seemed reassured, less anxious than before, and she finally smiled and said thank you.

Michela also spoke of being alone in Beirut. She knows almost no one, she has no community nearby, but this does not cast doubt on the Lord's great love for her life. She does not feel abandoned, and nothing prevents her from making the journey. Soulaiman’s face also changed and he began to smile. It was like seeing the words of the Beginning Day embodied: "Precisely here and now, in the full ambiance of the breakdown of the human, the surprise of such a presence happens, the surprise of people who are presences,” people “who are not frightened of their own humanity and enable others to look at their own as well, without censuring anything.”

Read also - Covid in Romania: An emergency within an emergency

These presences respond better than a thousand words, because the real experience of what they are talking about vibrates in every fibre of their being. It also convinced me, who did not share the same questions, but, watching what was happening there, I understood more and more how convenient it is to live at that level of faith and self-awareness that changes my life and the lives of others. "As I listened to Giussani I could touch his love for Jesus," said Soulaiman. "And it translated into a huge embrace and love for me, it penetrated my heart and healed my wounds, it purified my vision of life, because it put the truth in front of me and awakened my conscience." When one says 'I', other 'I's' begin to flourish around them, and this gives rise to great hope. We made a very small, invisible gesture in a densely populated neighbourhood, of Damascus, immersed in darkness, poverty and the fresh memory of the war, but for the seven of us it was a moment full of light, full of the possibility of a life that is always new, always more rooted, always more certain.