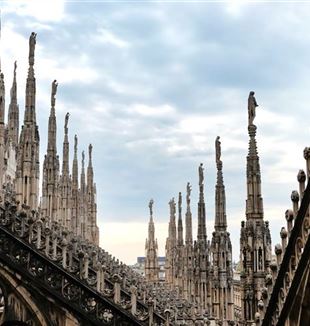 The end of school for my third grade class at the technical institute where I teach has brought with it some great surprises. This year, while studying Dante's Inferno, my students were fascinated by Ulysses. For this reason, on the recommendation of a friend, one May afternoon I invited them to a reading of the Canto that had been organised in Milan Cathedral. To my surprise, ten of them came. It was a simple moment, very beautiful, not to be taken for granted. But that afternoon was above all an opportunity to "discover" the Cathedral. In fact, at the end of the reading, they had more and more questions about the sculptures and spires: "How many are there? Who made them? How high up is the Virgin? Is it really all made of gold?” They were so curious that we went up to the top floor of the department store next to the Cathedral to get a closer look.

Inviting them up to the roof of the Cathedral then became a must. The whole class joined in, leaving me speechless. Thus, on the afternoon of the last day of school, in the midst of groups of students now happily 'on the loose', we met up for our strange outing. Only three of them had been up before, ‘as children’. I had prepared myself, asking for material to study in order to be up to the task. But before we went up, the kids were so excited that I was not able to say anything. It was better this way; the Cathedral spoke for itself. My pupils, having reached the top, were overcome by the beauty of the view.

All of them, without me saying anything, enjoyed the spectacle of Milan in silence. Then, in groups, they began to take pictures and finally came to me to ask questions about the meaning of what they were looking at. One of them, particularly intrigued, said to me “there should be a book describing all the spires of the Cathedral.” I replied: “It is in my bag!” He asked to borrow it, and I enjoyed watching him go around the terrace with his friend, book in hand, looking for the spires in the photos. Only to return to me with new questions. A dynamic as simple as it is impressive: from amazement to knowledge. After more than an hour of the view, selfies, questions and chatting, we went downstairs to enjoy an ice cream and wish each other happy holidays.

Thinking back to that afternoon, I think to myself that this has really been a wonderful school year. A very hard one, at times exhausting because of the constant changes – openings, closures, quarantines, sick students – in which, however, I came to understand better what my task is where I am. Thinking back over so many events, of which this is certainly the most striking, I recognise that only my yes, only my adherence to the Lord, is an adequate reason for summoning twenty-two students, after school has finished, to spend the afternoon with their literature teacher. There is no more effective magnet. Not even being a young teacher and perhaps being able to more easily involve them because of a smaller age-gap works. Only my yes to Christ, who gives them to me now, can make me, in their freedom, attractive to their eyes. As the Psalm says: "What shall I render to the Lord for what he has given me? I will raise the cup of salvation and call on the name of the Lord". Not my doing, but my waiting for Him. And my recognition of Him, moved, in the moments I live with them.