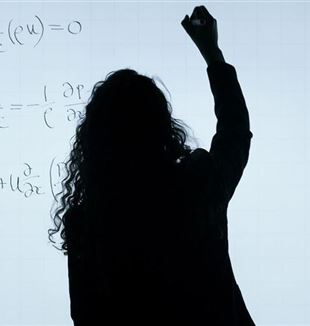 I have been a volunteer at Portofranco (a study help centre) for several years. In mid-March, I was asked to follow a girl from India who was having difficulty in mathematics. We met on Meet: her face was sad, and she needed a grade of at least 4 in order to pass. The time passed quickly and, after solving a few equations, I asked her about her life, provided she felt like talking about it. The next day, I received a message asking if she could invite some of her friends and so I met two of her classmates, Indian like her.

At the end of the lesson, they told me that one of them is a Muslim; she wore a very beautiful veil, coloured with beads, placed on her hair, but her face was sad. The second girl is a Sikh, very open and smiley; the third, my initial pupil, said she does not believe in anything, but suffers from panic attacks, so at school she sometimes gets stuck in front of a question or a test.

We saw each other several times, working through inequalities, systems, parabolas, ellipses; comparing the lifestyles in western and eastern cultures; suggesting that she ask her mother about how to do meditation and relaxation exercises to control her anxiety; commenting on the beauty of veils; one of them affirmed that the greatest desire in life is to be loved. I tried to value every aspect of their humanity, highlighting differences and recognising their importance.

Gradually, their difficulties in mathematics diminished and I saw their faces change. The first girl began to smile because she realized that she could pass and was less anxious. The Muslim girl opened up, but there was still a vein of sadness. We talked to the Sikh girl about the history of her religion and I told her about the pleasant discovery (that I had looked up online) of how, in the midst of Buddhism and Hinduism, a thinker, or guru, was born in the 1400s who spoke of a single God and of the possibility of men knowing and reaching Him. It seemed to me that their humanity came out stronger, enhanced, and their study clearly benefited from this. In mid-April, they asked me to help them with physics, a subject I have never taught and which has always been quite difficult for me. I accepted and went back to studying physics.

It had been like a crescendo in which the joy of being able to understand mathematical formulas and, perhaps, a greater awareness of their value as people, have mixed together. In May, they invited another classmate, a Muslim, who also has difficulties with her studies, but has a much more serene approach. At the end of the month came the first significant results: their grades increased from a 4 to a 7, with peaks of 8 in some questions. I was amazed and grateful. Even their maths teacher was amazed at the progress they had made.

In June, the first girl sent me a few voice messages in which, her voice broken with emotion, she told me that even the last test went better than she had hoped and she would have no problem in passing the year. She added that her dad wanted to meet me.

So we met in a bar. The girl was happy. The father, a bit uncertain, with very limited Italian, asked me who I am and what I do. I told him that Portofranco was born from the intuition of a catholic priest who, faced with young people’s difficulty in studying, proposed individual help, followed by volunteers.

I also told them how all this was born from the desire of another priest, Fr. Giussani, who in the 1950s realised that the Catholic faith was no longer useful for living and so he started a movement. Finally, I spoke of how I too encountered this story and how my work as a volunteer stems from there.

Read also – I saw the unexpected

The father, a Buddhist, asked me who Catholics are, because he seemed to have understood that there are two "species", but he did not quite understand. After almost two hours of chatting, he said: "I always avoid talking about religion, because then we quarrel, but today was not like that". Moved, a little self-consciously, he thanked me for bringing a smile back to his daughter's face and for helping her overcome her difficulties in maths and physics. I replied that this story was a surprise for me too, because, step by step, I saw life blossoming and I too thank his daughter because with her freedom she also touched my heart.