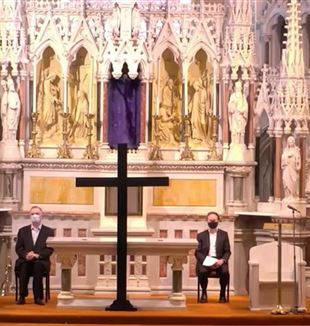 For almost twenty years, in Dublin, we have been organizing the Good Friday Way of the Cross in Phoenix Park, the city's main park. In recent years, it was led by the Archbishop and offered to the whole city, becoming the most significant public gesture of Holy Week in the Irish capital. Like last year, it was not possible to organize it this year due to the restrictions imposed because of the pandemic. Ireland is currently at "level five," the highest on the scale of restrictions. For several months, it has only been possible to enter churches for personal prayers. Mass can only be watched online.

In precisely this situation, our desire was to propose a public gesture - simple, but that could reach the whole city. We shared this thought with the newly appointed Archbishop Dermot Farrell, and he immediately said he was willing to live that moment of Holy Week with us. We initially wanted to broadcast an itinerant Way of the Cross online, that would call at the different churches of the historic center. However, we had to limit our ambition and organize it inside a single church with a maximum of six people present, which is the number allowed for online celebrations: the priest, readers, the sacristan, and someone who sings.

For help with the technical aspects of the broadcast, we met those in charge of Church Services TV, the Irish organization that provides webcam services to most parishes in the country, but also to entities in Great Britain, Belgium and other countries. We were truly amazed to learn that in 2020 this service was contacted more than 80 million times, which, first and foremost, serves a missionary purpose. The encounter with these people was one of the surprises of our attempt to face these complicated circumstances without imposing our own scheme upon reality, but trying to enter into it with openness. Thus, even these "technicians" became companions on the road. On the one hand, they allowed us to organize the Way of the Cross; on the other, they helped us to constantly remind ourselves of the event-like nature of the Christian experience and thus of the nature and ultimate function of a "gesture," which is that, according to the etymology of the word, of "bringing meaning."

Another encounter was with the Carmelite community, present in a parish in the city where, initially, we would have liked the Way of the Cross to take place. It was not possible, but we were struck, on the one hand, by their great willingness to collaborate in the future, and on the other, by the motivation they gave us in declining the invitation. The way they had chosen to serve the Christian community, within the regime of restrictions, was to offer the sacrament of Confession, which not all parishes are offering today. They have become a point of reference for many people in the city.

The Way of the Cross was followed by hundreds of people in our country, but also in Great Britain, Romania, Holland and New Zealand. We do not know how the Eternal Father will use this small moment of prayer and witness of ours in the context of the restrictions and closures. What we do know is that the current difficulties do not extinguish our cry. On the contrary, they make it louder. Thus the desire to communicate what we have met becomes more urgent and this urgency pushes us to be more "intelligent" and creative.

One of the people who was most moved and grateful for the gesture was one of the latest arrivals to our community. A new Irish friend whom we had never met in person, but who during these months had followed School of Community online with moving loyalty. If a gesture serves to recall the meaning it carries and if it serves as a paradigm, and therefore as help to face everyday life, this Way of the Cross has been and continues to do so in work, in the family, in relationships during this time of pandemic.

For example: today there is still no clarity for some job sectors. There is still no light at the end of the tunnel and the contours of the "new normal" in which we might find ourselves are not understood. But, as we have been able to experience during these weeks, what helps most is the consciousness of living each single moment in relationship with the Mystery. Living this, with a question filled with the certainty that the Risen Christ will reveal Himself, allows us to recognize the positivity within the darkness of the circumstance.
We are undoubtedly suffering the burden and consequences of the crisis. But we are certain that something else comes first, which gives us the energy to face the difficulties and the desire to build within a hostile reality. Nothing, in this sense, can prevent us from living and proposing what we met.