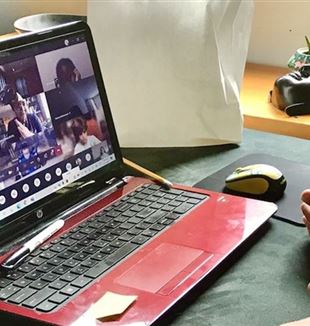 I have been teaching Mathematics and Physics in an Italian school in Bogotá for twelve years, ever since I arrived as soon as I got married. From this year I have changed school, still Italian, but much larger and older. It is as if I have moved from a public to a private school.

In this new adventure of mine, I was forced to get to know the students over the computer. In fact, we did not have the opportunity to go to school until November and, even when we started, only some were there physically (five students in the classroom and fifteen connected from home). It was a great effort and continues to be, but every week something happens that moves me, shows me that the kids in front of me - who do not want to turn on their camera or spend eighty percent of their time doing something else - are like me; they want what I want. The most interesting thing is that by watching them, listening to their complaints, explaining mistakes and trying to answer questions, I have begun to rediscover my needs.

One day, in class, I got excited talking about Physics, the kids looked at me astonished, so much so that a girl asked me: "Have you never thought about working at Nasa?", an example of somewhere that seems fantastic to a person passionate about Physics. I stopped and replied, "Yes, might like to, but what I do with you I do so willingly that I am not thinking about Nasa right now." They looked at me even more amazed. That is when I realized that if I do not leave the house every day wondering why I do this job, I am betraying those eyes and that amazement that I have seen in them at least once. And I cannot allow that. The kids’ faces were shocked because there was someone who wanted to be with them, who did not want to be somewhere else.

Read also - The Pope in Iraq: "We, living stones among destroyed churches"

In the same class two teachers recently left for personal reasons. The kids were angry that these teachers had not said anything. They only received the news with the names of their new teachers. Their serious faces said, "Who am I? Someone who is worthless? Someone to not even say goodbye to?" They moved me and confirmed to me the seriousness of the path that Julián Carrón takes us on, and that what the teachers wrote in their letter to Corriere della Sera is true: "Without a living experience deep inside of them, capable of lighting their own eyes, how could they go back to their classroom, exhausted and hurt as they are after a day with hours spent before a screen and with poor learning results?".