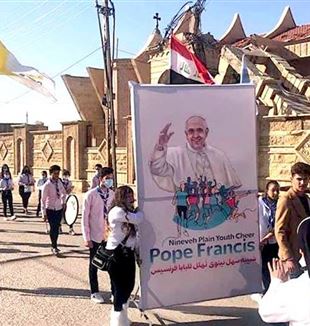 Youssef checks that everything is in order. The large windows of the "church of the martyrs," as the Syrian Catholic Cathedral of Our Lady is called in Baghdad, are neat, the stone floor is polished, new ornamental plants surround the altar. "Everything must be ready for when the Pope arrives." This man, almost sixty and who guards every day, with discretion, one of the symbolic places of Christianity in Iraq, is not very chatty. But the faith of a lifetime can be perceived in his gestures. For him, a survivor of the massacre of October 31, 2010 within these very walls, Pope Francis’ visit, between March 5 and 8, "is a dream come true, we hope that everything will go well, God willing it will be so". When the terrorists broke in ten years ago, he was in the sacristy. He managed to gather a small group of people and escape, while the jihadists killed two priests and 46 faithful: among them a 3-year-old boy and a 12-year-old girl.

"A year and a half ago the Church recognized them as martyrs and servants of God, they are always with me. Every day. I am glad the Pope is coming here to meet us and to get to know their stories," he says today. The church has been completely restored, but the floor and altar are the same as they were the day of the attack. Buried in the crypt are the two murdered priests, Thaer Abdal and Wassim Kas Boutros, and some of the faithful who died that day. All the others rest in various cemeteries around the country. Iraq is a beautiful land, but in recent decades the blood of Christians (and many Muslims, Yazidis, Kurds) has bathed cities and rivers, mountains and fields.

Six years ago, Isis broke into the Nineveh Plains looting and killing, and thousands of civilians were forced to flee. Some monks and priests decided to stay to guard and preserve churches and monasteries from the devastating fury, risking and sometimes losing their lives. But even before the Caliphate, things were not easy for Christians. The list of religious people killed is long: from Sister Cecilia Moshi Hanna, who died in Baghdad in 2002, to the Chaldean priest Ragheed Ganni (the Pope might briefly stop at his tomb, on the road to Erbil) and his three deacons massacred in Mosul in 2007, to Monsignor Faraj Raho, Archbishop of Mosul who was kidnapped and murdered in 2008. 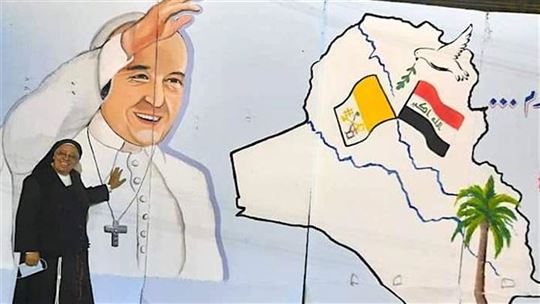 Yet, today, lament does not prevail amongst those waiting for the Pope. Sister Yola Girges, a Franciscan, is impatient. Yesterday, Covid annoyingly forced her to stop, because for weeks she has been preparing the songs and psalms for the celebration with some young people from the parish, which will be heavily guarded. "I got sick on the eve of his arrival, but I hope to recover in time." She recounts that the Christian community in Baghdad is now very small; almost everyone has left. In general, the country has seen a diaspora of Christians, down from 1.5 million in 2005 to just under 300,000. "But, for me, those few are like flowers in the desert," says the nun. "They are small seeds for the whole Iraqi community. We sisters run a small nursery and the Muslims are keen to send their children to us. We are friends and they recognize that their children need to live in a beautiful place, where they can breathe charity and freedom. In this we have no merit, we simply bring our Christian faith into our daily work, our ancient culture that has always inhabited this land. I hope that by seeing the Pope and by seeing the dedication, the commitment, the love that we are all putting into getting things back in order, even those who have left may choose to return."

These days, she says, the real unrest is in the North, in the Plains of Nineveh: "Small groups of Christians have returned to live in Mosul, Qaraqosh, Bartellah and the villages of Ninawa. For months, young people have been preparing for the arrival of Francis by attending classes and spiritual exercises accompanied by priests. It could not be something improvised, it was necessary to be ready even within our hearts for his coming". As Hanna, a Christian teacher from Bartellah, recounts, these moments of sharing gave rise to many questions on the meaning of being Christian and a minority, on the meaning of life, of starting a family despite adversity, on pain and death: "One question that often comes up is that of forgiveness. Not everyone feels like forgiving, because the wounds are still open, pulsating." 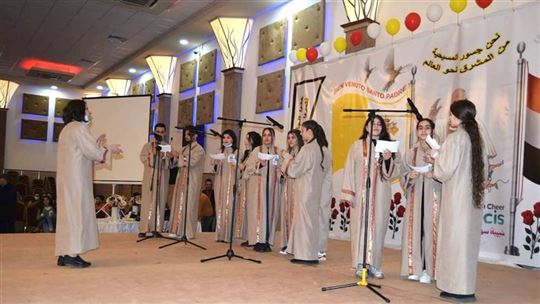 Rony is more disillusioned, almost fearful of this papal trip. "The Pope will stay here for very little, we will not have time to talk to him. But somehow I keep hoping to be like Zacchaeus. I am no one, but if I could I would climb the highest street lamp for him to see me. I would tell him about how lonely I am, about the struggle to find a job after my company went bankrupt, about the girl I wanted to marry but is no longer there. My connection to Iraq is strong, but how many times I have been tempted to leave like others. I wish the Pope would see me, invite me to be with him and I would take him to my home and say, 'Stay here, we need you.'"

Maryam, a Christian woman from Mosul, recounts that every day for weeks, before going to work, she and her children have been going to the church of Al-Tahira. "With other people from the city, we have worked for it to be once again the most beautiful church in Iraq. My daughters and I cleaned all the big columns, it took days to remove the dust and the signs of war. In our free time we look for good carpets to lay on the floor. The boys help their fathers rebuild the destroyed spaces or the outer wall." Mosul, the country's second largest city, still bears signs of devastation. 32 churches were destroyed by Isis and were never rebuilt, and the same goes for many mosques, some schools, cemeteries, and homes. Reconstruction is proceeding slowly, but the interest of the UN and the arrival of the Pope has given the progress a small push. Thus, at least the church of Al-Tahira, the convent of Our Lady of the Hour and the mosque of Al Nouri have been put back on their feet. "The Pope should come more often, every year perhaps," laughs Samaan, a farmer who has returned to live with his family in the city after four and a half years of exile.

In Qaraqosh, children have prepared prayer intentions and new songs in Arabic and Italian "so that the Pope can feel at home". Even the sick hope to be able to see him at least from a distance. Among them is Rita, twenty-five years old. She got married last year, after spending the last few years in a refugee camp on the outskirts of Erbil. She dreamed of returning to her native Qaraqosh, of living with her husband and having many children right away. A tumor, instead, took her by surprise and to pay for the treatment the couple had to give up fixing up their house. "I did not want to get sick, but I am happy because I could marry my love, with a beautiful wedding. The Lord gave me the time to do everything. Even if the cross is heavy, God willing, we will carry it together. If I could meet the Pope I would tell him that we pray for him, that we are his friends, that he must not forget the Christians of Iraq. Especially those who have fled and do not want to return, like my uncles."

Emel, a Chaldean Christian, is enthusiastic: "The visit is short, but that is fine. I am happy, I am moved, the plain of Nineveh has come back to life. We feel important because the Pope is interested in us. The other day at Mass our bishop reminded us that the Holy Father will see with his own eyes the destruction in these streets, but he will also meet us who are the living stones of Christianity in Iraq. He reminded me of what we are doing to the world." Shalito, on the other hand, fought with Christian militias against Isis, saw many friends die, and only a year ago resumed his business as a beekeeper: "We will go to the stadium in Erbil to see him. We would have liked him to stay longer, but it is already a great gift. My daughter has learned a greeting in Spanish because she hopes to be able to hug him and thank him in person," he says in Aramaic, the ancient language of Jesus that still survives in these areas.

But there will not only be Christians (Chaldeans, Syro-Catholics, Orthodox, Arameans...) to welcome the Pope. Even the Kurdish, Yazidi and Muslim communities, with their myriad denominations, have moved to ensure that everything is ready. And in the streets they will all celebrate together when the procession passes by. As recalled in recent days by the Shiite leader Sayed Al-Khoei, "the Pope's visit is not only for Christians, but for all those who live and work for peace everywhere". And there are many of such people in Iraq: "If the Middle East were a palm tree, its foliage would be Muslim but its roots would be Christian. The beauty of our land lies in diversity. From here we can begin again."