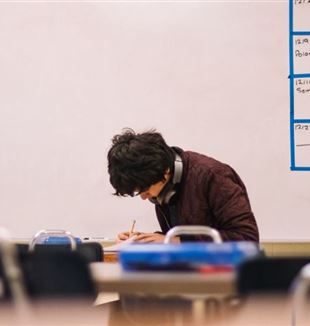 The meeting on education on January 30 amazed me by virtue of the boldness and confidence Fr. Carrón has in each of our hearts. It made me think about what happened to me with one of my students.

At the beginning of the year, I met this particularly reluctant boy, who gave no sign of reacting to the stimuli I tried to give him during my classes. One day, I had to tell him off harshly as yet again I found that he was unprepared. After that, he looked for me to tell me that he did not know how to study. A dialogue was born that went far beyond the French Revolution and St. Thomas. During that chat I asked him if he had any questions in his heart and, in a sharp and clear way, his answer was: no. During these months, however, we have tried to look at what is there: he has begun to study with his classmates, and now he even sits upright in his chair during class. Yet, he remains himself. Distance learning involves the particular struggle – for him and others- to get out of bed, and he often gets up too late to connect at the scheduled time.

A few weeks ago, I began explaining Spinoza, specifically the introduction to the Treatise on the Emendation of the Intellect: "After experience had taught me that all the usual surroundings of social life are vain and futile; seeing that none of the objects of my fears contained in themselves anything either good or bad, except in so far as the mind is affected by them, I finally resolved to inquire whether there might be some real good having power to communicate itself, which would affect that mind singly, to the exclusion of all else: whether, in fact, there might be anything of which the discovery and attainment would enable me to enjoy continuous, supreme, and unending happiness.”
I have dwelt a great deal on these lines, so that it might also be evident to the young people that such a man is a companion on the journey, whose theories and solutions I may not agree with, but whose question I can certainly say I share.

A few days later, I was teaching online and I saw that the boy was not there. With a few minutes to go, he logged on. I showed all my disappointment at his being late, until he decided to turn on his microphone to say: "Prof, I know I am late and I am sorry, but I could not not know what the answer to the supreme good is." I was amazed, moved and grateful for his presence, because in his ways, which can certainly improve, he is on a path, or rather, we are on a path, together to really discover what that supreme good is.