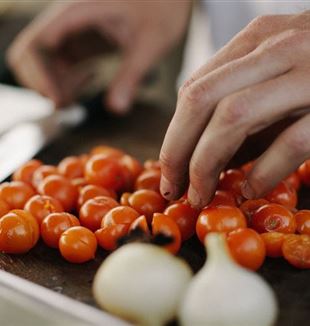 In the past few months with some friends we have been discussing what we could propose as a gesture for the AVSI Christmas Tents. Traditionally, in our area, we organised a live Christmas crib in the city’s main square. This year, for obvious reasons, this method had to be discarded. Not doing anything, however, and not thinking of other proposals did not leave me at ease.

I asked a friend of my husband's, a chef, if it might be possible to propose a mini live cooking lesson online, donating the participation fee to the Tents. It was an "ironic attempt" that, thanks to his yes and that of some friends, came to fruition on December 13. In a totally unexpected way, many more people joined than we had imagined, due to incredible word of mouth.

But the biggest surprise was the chef's great availability and humanity. When we called him to thank him, he replied that he was the one who was grateful for having given him the opportunity, in this time of crisis and lack of work, to put his skills into play and do good for people who have enormous needs and to give that day a purpose.

Preparing for the initiative was not easy, but what I experienced was really a plus for me, and I was amazed – me, who am messy and not very precise – at how I became more and more familiar with what we read in the Christmas poster: "We start to have an affection for everything, everything, and the magnificent consequences of this are respect for what you do, precision in what you do…as if you were outlining another world, another world within this world.” I am more and more grateful for this companionship that continuously picks me up and accompanies me.