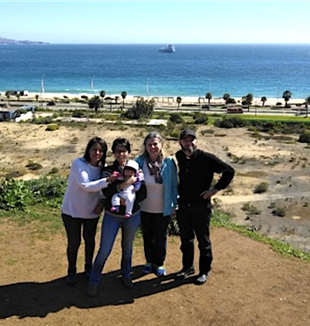 For years now, on Saturday mornings, we have been meeting outside the San Joaquín Women's Penitentiary. We read a passage from The Meaning of Charitable Work, recite the Angelus and enter. We pass through security controls, and several gates that close behind us until we reach "Block 1" where our dear friends are waiting for us. Each of them has their own story, their pain, and their hope. There are many faces that we have got to know "inside", Cony, Cecilia, Marcia, Peca, Nacho, Daría and many others. The explosion of the pandemic in mid-March prevented us from meeting them again.

Full of expectation and with the question of how we could continue this year, an invitation unexpectedly came from our national leaders, on the theme of charity as the central point of our experience, unemployment caused by the social unrest in our country in October 2019 and the pandemic. What motivated us to continue this experience in these years? Listening to everyone's experiences, it was clear that "the most precious thing about charitable work is that it is always a constant education to gratuitousness."

Letting this suggestion provoke us the desire was born amongst us, Elena, Claudia, Patricia, Alessandra, Paola and Sandra, to meet every two weeks online, along with Fr. Simone Gulmini, a priest of the Fraternity of St. Charles Borromeo, and some friends of other charities. The challenge was clear; the questions Carrón asked in his letter about the pandemic of March 12, 2020, to the CL movement, were clear: "How can we accompany each other in all this? What kind of companionship do we really need?” So, we began to work on Fr. Giussani's The Meaning of Charitable Work, alongside work on the testimonies of the prisoners in Padua prison quoted by Pope Francis during this year's Stations of the Cross. The fruit of these meetings was a true gift and the friendship between us has become increasingly essential.

The first movement of our freedom was to ask the Chaplain of the Prison Pastoral Ministry, Sister Nelly León, of the Congregation of the Good Shepherd, what were the needs of the inmates linked to the pandemic. She suggested that we collect toiletries, candy and sweets for those who were worried and distressed about not being able to receive visitors, not seeing their children and family. That said, we initiated a campaign amongst our friends and colleagues. One of them, surprised by what we were doing, would not stop thanking us for allowing him to help our friends.

Another fact that happened is that we have been able to maintain a friendly relationship with some inmates who have served their sentences outside of the prison, for example with Cecilia, a Chilean, and Aurora, a Bolivian. In their attempt to rebuild a life away from drug trafficking, they let themselves be accompanied by the friendship of Sandra, who, among other things, also helped them clean up their criminal record and accompanied Cecilia, who is epileptic, to her medical examinations.

Another fruit of the grace we have received this year was to meet our friend Daría, a Bolivian friend of ours who we had met "inside" and who was released three years ago. She decided to stay in Chile and start a family. She has a daughter named Alaia, which means "joy". At the beginning of August, she sent us a message on Whatsapp asking for our help. Her partner, Jaime, had lost his job in construction due to the pandemic, and she, as a seamstress, a trade which she had learned in prison, could not cover the expenses of a newborn child. They needed diapers, special baby milk and food. And so, asking ourselves once again how we could help them, in less than two weeks we managed again, thanks to the generosity of so many of our friends, to get what they needed. But the adventure did not end there. On Sunday, August 30, with Alessandra and Fr. Simone, we left early in the morning, with all the necessary health permits, to go to Viña del Mar to deliver the things. Daría, Jaime and their little girl were waiting for us. It was a beautiful encounter. We went to a viewpoint where the sky and sea, of an intense blue, reflected the "Beauty" of an encounter that allowed us to share with them their needs, their life.

Read also - "There is always someone with you"

When we returned we were happy, our hearts overflowing with joy. As I arrived home, I received this message from Daría, "I thank you with all my heart for what you have done for our family.” Once again Carrón's words were made flesh, who in the same letter, quoting Fr. Giussani, wrote, "The only condition for being truly and faithfully religious is to live always the real intensely… Living life as vocation means tending toward the mystery in the circumstances through which the Lord had us pass, by responding to them.” This is what makes us truly interested in others, what saves me from nothingness and makes us understand that the pandemic was not an impediment to continue living charity and being grateful for everything that the Lord continues to make happen in our lives.