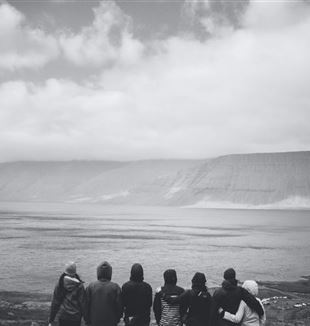 I am also in self-isolation. This is the thirteenth day after my daughter’s second swab. Several classes and colleagues already in self-isolation. And a student in my class tested positive. The students were anxious because she had told them over the phone. As soon as I entered the class, I realized that they needed to talk about this. The official alert came during class, the Covid contact person came to tell us that we all needed to leave the school. All the students and some teachers, including myself, who were in that same class on Saturday. And the students? Some were almost rejoicing, others questioning.

One pupil burst into tears. I went over to her while everyone was calling their parents to come pick them up. I spoke to her. She was worried about her mother who is not healthy, and her younger sister. Their father had abandoned them a long time ago and could not help. I told her to have courage, that maybe she could get help from a neighbor, a relative, if necessary, and that I was available to be contacted at any time. We would talk to each other by email or phone. An autistic boy made us all smile when he said goodbye loudly, "Prof, distant but united!” In the afternoon, I received this message from that girl: "Hello Prof, I wanted to thank you for the words you said to me this morning. They comforted me and made me understand that you have to think in a positive way. My mother assured me that somehow we will get by, thanks to the help of the neighbors and some friends. Have a good day prof."

Read also – “A companionship to sustain my yes”

If fear and uncertainty had not overwhelmed me, it is because I still have what I saw at the adult Beginning of the Year Day and the GS Beginning Day in my eyes; Carrón’s face, Fr. Giussani’s face that I saw in a video on the CL Instagram page for the anniversary of his birth; Marcellino’s face…And the joy of having received a message from Giacomo, a second grade GS boy, after the beginning of the year: "I was particularly impressed by the song Favola and by what Carrón said about uncertainty. In fact, even if we live without ever knowing what can happen to us, we should not be afraid because there is ‘always someone with you’. This someone can be Jesus, but also a friend, a family member, maybe even a person who does not know you well; who is with you anyway. This made me understand that things in life should never be faced alone, but together." You only see what you admire.