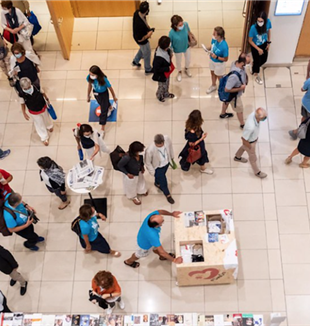 "Geppetto, who, through all the sad story, thought of only one thing, and that was that the marionette was dying of hunger, suddenly pulled out of his pocket three pears and handing them to the marionette said: «These three pears were to have been my breakfast, but I give them to you willingly. Eat them, and may they do you good.» «If you want me to eat them, be so kind as to peel them».”

These words are taken from The Adventures of Pinocchio.. The story of a puppet by Collodi, of which Franco Nembrini provides a rereading in his book The Adventure of Pinocchio. I was very struck by Nembrini's reflection upon this passage: "We are all like that. When we receive a gesture of mercy, of goodness, we turn it into a demand. It is terrible, but that is what happens. We live the whole day like that. If we were a little more loyal, a little more sincere, in the morning, when we face the day, there would not be so many opportunities for us to complain or demand.”

On the first day of this special edition of the Meeting, I felt a sense of bewilderment and melancholy compared to last year where I experienced a Meeting filled with the hubbub of voices, hugs and handshakes with everyone I met. I was struggling to accept the new reality. The jingle in the background that accompanied us every day was no longer there: everyone had their own office and silence reigned in the corridors. There were very few visitors and masks only allowed a partial view of people’s faces. When we interviewed someone, we had to keep our distance and there was no communal mealtime in the cafeteria.

If at first I was "scandalized", shortly afterwards, I realized that I was faced with a privilege that only a few people besides me could enjoy. The Greek etymology of "scandal" is "the stumbling block": each one of us this year stumbled upon a great obstacle, a pandemic that no one expected they would have to live and that has immobilized the whole world. And when you stumble, you stop and, if you do not want to fall again, it is essential to become aware of the road you have travelled up to there to calibrate your step and plans. Thus, the "scandal" I experienced was a beacon that allowed me to turn and focus my gaze upon details that I would not have noticed if I had been fixated on what I thought I was missing.

These days, moreover, I have had the confirmation that physical distance does not imply social distance, on the contrary. During the Meeting, I saw the effectiveness of the network that has been built in recent months so that each sector could work in sync with the others, albeit at a distance. And I perceived that meetings and relationships are not determined by a handshake or an embrace, that what matters is what you want to transmit and not the way, and that when you work on a project in which you firmly believe, you do not care that after a few hours the mask becomes annoying or that fatigue takes over.

Read also - Carrón at the Meeting: "Where does hope originate?"

"The eyes are the mirror of the soul." Never before has this phrase been truer. At the Meeting, meeting the other was a matter of gazes, and the eyes of all those with whom I had the privilege to share this adventure revealed wonder and gratitude. I am grateful to have had the opportunity to live this Meeting in this way, and to have shared it with the best companions and colleagues I could expect, thanks to whom I returned home with a bag full of life lessons, but above all with questions. The wonder of these days is not only that feeling that makes you question what you have in front of you, but a state of mind that opens up questions that continue to question me now. I think I have experienced the sublime that this year’s title spoke of: in the smiles behind the masks, in the "graces" that are never taken for granted, in the warmth that was perceived despite the distance. "Blessed are the moments, and the millimeters, and the shadows of the little things," wrote Fernando Pessoa. When I think how few seven days are compared to an entire year, I am amazed at the force with which those "moments" and "millimeters" experienced in Rimini have breached my heart, leaving a feeling of "emptiness" on the last day, because that experience has come to an end. But it is a void which I have the duty and honor to treasure during the year, nurturing the questions that so much wonder has opened up within me.