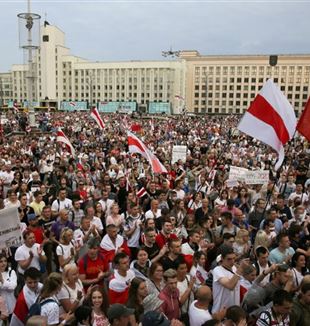 When I went to Italy from Belarus to go to the Seminary a few years ago, one of the things that amazed me most was how interested Italians were in politics. But what surprised me even more was that the Christians were also passionate about social issues and the fate of the country. Then, over time, as I got to know the friends of the CLU and the experience of the movement, I began to understand the reasons and value of this interest in politics. In my country, no one has ever posed this kind of problem. We have always lived more or less peacefully, taking for granted that those who governed us would do what they had to do. At least until the presidential elections.

Today, what I see is the reawakening of a people moving for the good of the country. It all began before the protests because of the electoral fraud, when we found ourselves bringing aid - disinfectants, masks - into state hospitals. People were forced to go at night, because those in charge of the facilities could not accept them during the day: they would have denied the opinion of the President who denied the existence of the pandemic. Those who did would have been fired. This was a country that was at the end of its tether. And people began to react by saying openly what they think.

Today, people are demonstrating peacefully in squares all over the country. Thousands are arrested and beaten. People disappear (this has also happened to some friends) and then reappear after a few days outside prisons. To date there are 80 "desaparecidos". All over the country, in front of detention centres, queues of ordinary people are formed who, spontaneously, offer to help those who are released: there are those who need to be accompanied home and those who need to reach a hospital because of their injuries. There are doctors and lawyers. A popular mobilization never witnessed before.

I am moved by what I see. I am struck by the reawakening of my people, who for so many years were apathetic and indifferent. I see that none of those who protest use violence. In the streets, cars are destroyed by the special police forces, not by demonstrators. Instead, I have seen images of volunteers picking up garbage during marches. There are people who, spontaneously, direct the traffic because the traffic lights are turned off and drivers who are blocked do not show signs of anger. This peaceful climate is the most amazing thing, it is miraculous.

I am parish priest in two countryside parishes in the northwest of the country. I would also like to go to demonstrate and help those who have been arrested. But my task is to continue to do what my vocation calls me to. Like many people, I too struggle to sleep at night because my feelings are strong (a pharmacist friend told me that she has never sold so many sleeping pills like in this period). But I think that continuing to be a parish priest is the best contribution I can make to my country today. During my homilies I do not talk about politics, but I continue to announce the Word of God, which is a message of mercy and forgiveness.

If we do not learn to forgive, now that the names of the people responsible for the violence against demonstrators are becoming public knowledge, the risk is that the country will split into two. Everyone has a neighbour, an acquaintance or a friend who works for the State and who is forced, on pain of dismissal, to defend the President’s positions. Without forgiveness, Belarus will have no future.

Read also – Brazil: My bond with the infinite

Speaking with my priest friends, I see that they also share my same experience. We are all children of this people which has been reawakened. And we are children of the Church and this circumstance is an opportunity for us to live obedience to the Bishops.
We do not know what will happen. We live the dizziness of living the present as it is, without being able to imagine where this will take us and our country.
I pray that the Lord will protect the Belarusians from themselves, from the temptation of hatred and violence.