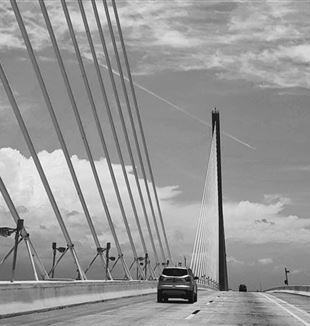 My "quarantine" started very peacefully. We had just moved (me and the other two Memores Domini with whom I live) to a new house and we were just in time to invite some friends for an inaugural dinner. It was the evening before the beginning of the "shelter in place", the authorities’ appeal to take refuge in your house. At the time, there were very few cases in our county. We live in a rural town, where most of the population is made up of university students and there were three or four reported cases. The university where I study and work closed from one day to the next, "moving" online. It was also an opportunity for me to focus upon my research project.

The first few weeks were quite surreal. We regularly checked the bulletin of reported cases, but they were struggling to increase: three, four a day. And yet, the whole city was blocked. I lived waiting for a very dramatic situation, which for the moment was scarcely dramatic. It was as if we were equipping ourselves to live a difficult situation (with advice, prayer intentions, instructions for meetings on Zoom...), which we were not yet experiencing. Rather, our life was simple, made up of a lot of work, a lot of silence, and many dinners together. The greatest drama was to talk to our families in Italy daily without being able to do anything for them. The surprise, instead, was how decisive it became to accept to be "present": forced to dine at home every evening, we were surprised at the freedom with which we accompanied each other, in an attempt to understand what was happening and in the freedom to respect the silence of others or accept their requests for help.

At the end of June, the situation became more complicated. Cases began to rise, especially here in Florida. But the truth is that even now no one really understands what is happening, whether it is really an emergency like the one that hit Italy or New York. Moreover, the presidential elections in November have made public debate really sterile and blind: the newspapers report an increase in cases, especially in the Republican states, to show that their less strict policies have failed to respond to the health crisis; the Republicans, on the other hand, fear economic collapse if the restrictions are not relaxed. In concrete daily life, not wearing a mask has become a political stance and legal measures are threatened for "provoking transmission" against institutions that fear the possibility of reopening (schools and universities). In fact, it is difficult to take advantage of the opportunity to ask yourself the many questions that this society would vitally need. We seem to be witnessing a general schizophrenia, which leads many people to the illusion of finding certainty by denouncing the groundlessness of the certainty of others.

I do not live well in uncertainty. My nephew has just been born, and I do not know when I will be able to meet him. I have a "gut" reaction every time I get an email that starts with: "In these uncertain times...." I had begun some projects to carry out in the fall semester but I have not heard from my work partners for months; I have lost contact with some friends and I do not know how they are; driving through the city streets, the number of homeless people seems to increase day by day. I see people at traffic lights asking for money to pay their rent. Going out little, I never have any money with me and, every time, I get annoyed by my forgetfulness which means I have nothing to give them.

Where does my certainty lie? After all, many attempts to explain the pandemic hide the illusion of a certainty that lies in the ability to predict the future: "If I know what will happen, I know what to do now.” But is that really the case?

A few months ago, in our community, we gave notice that there would be no summer holidays. Yet another cancellation. A group of friends from various cities in Florida responded immediately and took initiative. I had followed the growth of their friendship from afar over the last few months: scattered over four or five cities, they are young workers who have become friends because of their encounter with the movement. One of them called me in early June and invited me to spend a few days together. She did not want to know "if" or "how" to take a vacation, but only to tell me that they did not want to lose the experience they have had in the last few years in Georgia, whilst living together, and that they were organizing to get together. I said yes, without any hesitation.

They rented a bed and breakfast, divided the tasks, shared their desires, invited friends. As the date approached, the number of infections, contrary to our expectations, increased. And with that, doubts and questions arose. We talked about the risks, the conditions and logistics of the place: each of us would have to decide whether to go.

They day of departure came. There were 12 of us, plus a few friends who joined for the day. From the two extreme ends of the state, we found ourselves in Tampa. On the first evening, the small group that organised the vacation introduced it by asking the question: "What are we doing here? Are we interested in verifying again the presence of Christ amongst us?"

I went on the vacation tried by many thoughts and difficulties because of some things that have happened. Seeing them, the simplicity with which they are friends and invite others, the freedom and seriousness with which they wish to follow (there were only twelve of us, but they organized beautiful games, the presentation of a book, a film), I felt welcomed and embraced. And it was easy to recognize that a certainty of a very different nature was born within me from the one I see sought after in newspapers and in speeches in squares. At the final assembly, many repeated this expression: "Here I find a place where I can ask all the questions I have." I returned home with only one desire: to know that "otherness", that person who bears the name of Christ, who surprised me once again by allowing these friends to be reborn. This makes me certain now, and makes the uncertain future a place where I wait to see Him again.