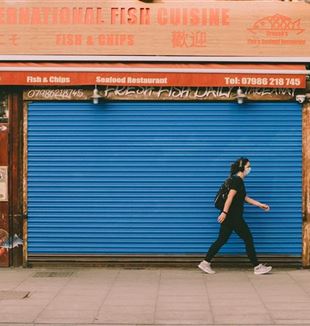 For me, lockdown began when I changed jobs before Coronavirus broke out. From a varied job that was full of responsibilities, with two hundred employees, I took up a government job. I cried the first few days: I had nothing to do and I was ashamed to be in the office doing nothing. And I was uncomfortable. If they asked me to do something, they explained it to me as if I were a child: how to photocopy, how to send an email...

I felt paralyzed, but it was only on the outside. Within me, a very intense work began, full of questions: "But you, Jesus, what do you want? To what are You calling me?" A close dialogue with Him, and there were no other interlocutors worthy of that drama.

It was clear to me that this change was His proposal, His invitation, and I wanted to say yes. I never had any doubt that I was wrong: that new circumstance was for me. However, the rupture remained and I could not see what His “design” was.

One day, I was given an empty register, two hundred pages long, to stamp. While doing it, I asked Him: "Was what I was doing before no longer useful? What is this for?" Then a hypothesis crossed my mind: "What if what You want is someone who recognizes You present now, as my consistency and that of the entire universe? What if what I am doing is useful to all the people I somehow left behind, left in Your hands?"

In short, the desire to say yes to Him blossomed: what I recognized as "given" asked for a heartfelt adhesion to Him. Carrón, in his letter of March 12, wrote: "Living life as vocation means tending towards the Mystery in the circumstances through which the Lord has us pass, by responding to them […] Vocation is going toward destiny, embracing all the circumstances through which destiny has us pass.” There was no separation between that circumstance and Jesus, between yes to my new job, with all that it entailed, and yes to Him. It was simple, like responding to a father.

I thus rediscovered myself. I am not what I do or, worse, what I can do for others, but I consist of the memory of a great love: "I am in this dialogue with You.” It was like taking my hand again, allowing me to savor my life again: my yes saves the world, because it is freeing and saving me.

Read also - Out of the whirlwind

When lockdown came, it was a continuation of this work. Now I am afraid of what might happen and of the consequences that all this will bring, for friends in more vulnerable situations. A lot of things could happen, because there are no hospitals, people are not calm. But the more I think, the more complicated I become. However, when I entrust myself, when I say yes, I am at peace. In the office, I was involved in preparing lists of those who, with the epidemic, want to return to Italy, Italians and Nigerians. I had to make many phone calls, I met some really scared people, restless because with no job they no longer had a reason to stay. Some have begun to doubt everything, even what they used to face every day. In front of them, I realized what differentiates me from them: a tranquillity, a certainty even in the midst of confusion, a peace that was not normal in this context. Many have thanked me, and not in a formal way. One person, after my phone call, called me back to ask me what my name was. But the peace that I live, fearful by nature, is only the fruit of that yes to Him, of following Jesus in the circumstances through which He invites me to discover who He is and who I am.