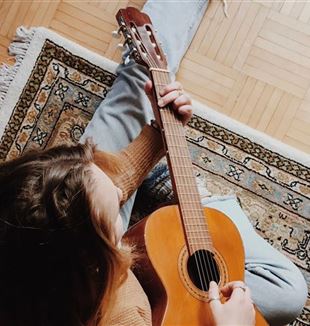 Two consecutive Sundays, a group of about ninety students from different Italian cities connected on Zoom and spent a few hours of their afternoon singing together. Everything began almost as a challenge, among a small group of adults following GS in Imola, as an attempt not to surrender to the reality that was imposing itself. We proposed it to the young people, without even really believing in it.

Instead, the first surprise was their response: an immediate adhesion, full of availability and proposals. So began a series of meetings, always on Zoom, to prepare this gesture. Above all, what amazed me was the attention that everyone put into the details: the choice of songs, the set list, their comments about the song lyrics that explained what had struck them. Even the choice to show some excerpts from The Lord of the Rings and The Wings of Freedom spoke about the experience that everyone was living and we wanted everyone to be able to share with us what was in our hearts.

I say us because the first thing that happened, I think, was the unexpected friendship that flourished between us, adults and young people together, meeting and witnessing to each what today is allowing us to live that essential that we really can no longer do without.
The next day, a girl who had connected, because she had been invited by other friends, and who knew nothing about it, wrote: "That video was really good for my heart. I realized that something good happened and how much effort was behind it. You feel preferred knowing that someone has worked so hard for you in order to make something like that happen. I am really grateful to each and every one of you for what you did and I am grateful for being preferred like that.”

And I, who find myself living a very painful experience as my mum is in the hospital in a critical condition, discover that saying "yes" to these young people, "yes" to the reality that presents itself to me, is much more reasonable than getting angry or resigning yourself to the situation; in fact, it allows you to look at everything as a great opportunity to see Him at work. I think it was precisely for this reason that, when my mum's situation seemed to get dramatically worse and I felt the full weight of my inability to do anything for her, it came naturally to me to ask the young people to pray for her and they remembered her in the Rosary they recite every night at 7 p.m., connected with more than 130 people on Zoom.

And then I remembered our friend Cristiana from Bologna, commissioned by Cardinal Zuppi to take Communion to the Covid ward of the Rizzoli hospital, and I told myself that perhaps there was someone who could do the same thing for my mother. At first it seemed almost impossible but, in the end, in agreement with the medical staff, we managed to get permission for the hospital chaplain to go and administer to her the anointing of the sick. He told us that she even attempted to make the sign of the cross.

Read also – “These encounters opened a door in my heart”

This really made me perceive that it is only when we give up everything and leave space for Him to act, does He finally manifest Himself and work, through the grace that is the Church, God's companionship with men. And the greatest surprise is that I too have the possibility to experience this companionship, which can be a friendship with young people aged 15-18 years old, with whom I now connect every morning at 7:30 am to say morning prayer and every evening at 7:00pm to say the rosary. Young people who, seemingly, have nothing to do with me.