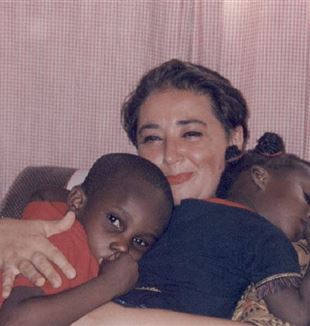 I would like to take this opportunity to express my gratitude for the 14 years spent in Lagos, Nigeria, with Anna Maria Chiarabini, who died in Rimini on 23rd September.
Anna Maria was a person who loved me and transmitted her great missionary passion to me. We set off together: her, Olivetta and me. It was 1988.
Before leaving, we had the opportunity to attend a Wednesday Papal Audience, in the front row, so that we could greet John Paul II. When he passed by, in front of us, Anna Maria said to him: “Your Holiness, we are Memores Domini and, as you told to us- “Go out into the whole world”, we are leaving for Nigeria. Say something to us”. And the Pope said: “Memores Domini”. She persisted: “Yes, yes, we are of the Memores Domini, but say something to us”. And he repeated: “Memores Domini”. And he continued to greet the people next to us. But after a few moments he came back and said: “Memores Domini, ut fructus vestrum maneat”. We understood that our task was who we are, the only possibility for our mission to bear fruit. We wrote down that sentence in our house in Lagos.

What struck me about Anna Maria, from the very beginning, was her great passion to meet people. It was something that came from having grown up with the Rimini Meeting, and, for her, everything had to be done greatly. I remember the presentation of Why the Church, with Cardinal Anthony Okogie. Or the exhibition ‘From the land to the people’, exhibited in Lagos’ most important cultural centre, in the task of preparing the guides, all the details…And the comments of people at the end: “We have never been on pilgrimage to the Holy Land, but what we have seen here and the way in which you have explained it, is much greater!”

The holidays with the students, who had no money and who came at the cost of not eating…Her great passion so that our Nigerian friends could discover the beauty of things (readings, poetry…) that had fascinated us. We performed, with students from high schools and universities, The Tidings Brought to Mary, Miguel Mañara and Péguy's poems, accompanied by music. Anna Maria was the soul, I was the worker.

For her, everything had to be judged from a cultural work, “The cultural work”, she would say. She helped me to prepare my lessons for the nurses of the St. Kizito Clinic, to organize the center’s inaugural ceremonies, so that everything could be an opportunity to encounter a beauty and a meaning for life. Until what our university friends called ‘the epic’ occurred: we received substantial funding for training in AIDS prevention and we organized a three-day trip to an ocean-side resort with university students, from which a great work of judgement and a proposal on such an important issue was born.

In 1998, for the occasion of John Paul II’s visit to Nigeria, during which he would beatify Michael Iwene Tanzi, we took a trip to the places where he, who would be the first blessed in Nigeria’s history, had lived. The result was an exhibition that we exhibited in the Nunciature during the papal visit and then in the cities’ parishes. Each exhibition panel bore the logo with arrows and the "X", with which Don Giussani explained the religious dynamic: it is God who, in the face of all man’s attempts, becoming flesh, comes towards us. This is precisely what the life of Blessed Tanzi demonstrated. Seeing the new monument to Don Giussani, built in Rimini, those panels and all the work done with Anna Maria came back to mind.

It is moving to see that Nigerian friends, such as Victor, Martin and others, looked for Anna Maria during the last months of her life, coming to Italy to visit her: they did not want to lose the grace of the discoveries made with her, a long time before, even if, over the years, the events of life had overshadowed them.

When I heard of her illness, on her birthday, I accompanied her with prayer and with an immense gratitude, for a friendship that can only be born and live within the meaning of life that Don Giussani brought among us, even in the closest companionship of the vocation to Memores Domini.