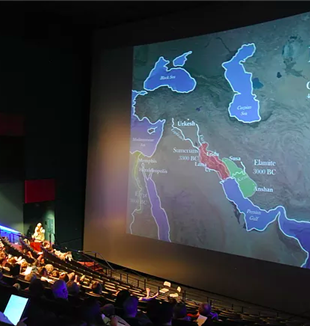 On April 20th, Houston Crossroads Cultural Center hosted noted archeologists Giorgio and Marilyn Buccellati for a lecture at the Houston Museum of Natural Science. To an audience of over 200 people, they shared their story about the work they have done in Syria since 1985, and which has been continually excavated even during the war in Syria. Many are familiar with the destruction caused by ISIS to the ancient sites of Palmyra. Urkesh (the site that the Buccellati’s focused on) is outside of ISIS controlled area, just south of the Turkish border, and is much older than the site at Palmyra. Because of the Syrians who the Buccellatis developed a friendship with, the site continues to be protected and excavated, and has become a true beacon of hope in the midst of a horrible, destructive war.

Houston has several local archaeological societies which bring speakers to Houston, supports archeologists through grants, and conducts field schools. I currently serve as the vice president of a local society and attend the meetings of all of them. So, when I first read about the Giorgio and Marilyn Buccellati in Traces, I jumped into action and begged my friends to bring them here. I introduced Crossroads to the Houston museum, and I contacted the Presidents of all the local societies and asked them to co-sponsor the event, and everything fell into place. I was nervous when I proposed this event because I was concerned that when people saw that Crossroads is a Catholic group they would be hesitant to sponsor the event. What makes Crossroads unique is that they don’t hide from their Catholic identity, but they also don’t ask people to look at reality with a type of special Catholic lens. Instead they ask people to look at reality and see it for what it is and free from cynicism and ideology, people see beauty.

And to me it was beautiful how these scientists can be even more able to discover such important things BECAUSE of their encounter with the Church which opens them up fully and even more intensely with reality, and initiates a more complete human creativity. Often, we think of Church as something that occupies a very specific space of the world (morals, theology, faith, art, music, family, charity), BUT when we go to a lecture on science, archeology, ecology, business, law, or engineering, we seem to have a separate way of looking at the things. What the Buccellatis demonstrated to me is that our faith can open us up to everything, and everyone, in all of history... even ancient history. Among the many provocations of that night, I think that is the one that will stand out most distinctly for me.


After the lecture, several of us went out to dinner. Besides some of my friends of CL, there were the Buccellatis, Dr. Charles Stewart who teaches at the University of St. Thomas and introduced the lecture, and Dr. Dirk Van Tuerenhout who serves as the curator of anthropology at the museum. For me, it was like a very strange dream. I know Dirk and Charles exclusively through the archeological society, but this evening they were eating with my CL friends, praying with us at a meal, and sharing their time with us. Charles shared that when he was in graduate school years ago, he felt that he had to put aside his faith as the scientific method required him to evaluate the artifacts from excavations stoically. So when he came across the work of the Buccellati’s, he saw people who were not ashamed of their faith. Giorgio spoke about a way of looking at the people of the past which is both simple and genius: he sees them as humans with the same depth of desire and experience as we have and long for.

When we woke up the next morning, my wife and I were moving slower than usual. We were drinking our coffee in bed and our daughters (who attended the lecture and dinner) came to sit and speak with us. I told them, "Last night happened! All these people, from different areas of my life, were connected, and it seems like a weird dream." My older daughter (who is always simple in front of the things) said, "That is what Crossroads is all about. It's a true way of looking at reality." This, to me, is something about the movement that is so attractive to me. It saves everything.#MiddleEast