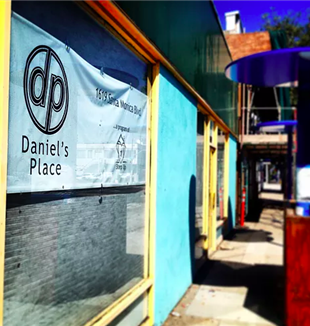 Only days after another two black men died in the streets like their lives had little value (in Tulsa and in Charlotte) my wife Lindsay, our friend Kristi, and I found ourselves together with six young black men all dealing with mental health issues and some of them with homelessness, writing poetry on the theme of "suffering" together. This is part of our monthly charitable work at Daniel's Place in Santa Monica.

We always begin by reading two poems by famous writers on the theme of the day before discussing and writing our own. The two poems we read this time were by Langston Hughes (the great Harlem poet) and Charles Bukowski. Bukowski's poem "Me Against the World," opens with a question that is absolutely shocking and crude in how unpoetic it is (we try to never edit or soften reality for guys who are living such an intense and difficult life). The poem opens: "Would you rather eat a bucket of shit or drink a bucket of piss?" Bukowski's question begins a series of scenes of the abuse he suffered as a child--on the school yard and most heartbreaking at home with his mom and dad. Bukowski's opening question shows the difficulty of the poorest and most abused members of society: with no good options in front of them. What do you get when you wake up in the morning as a poor, black man with mental illness living on the streets in Los Angeles? Do you want a bucket of piss or one of shit? When we finished reading the poem out loud many of the guys audibly gasped: "Damn!" "That's intense!" They could deeply relate to Bukowski's condensed account of pain and abuse.

And yet despite the desperateness of life for many of them, remarkably (I want to say miraculously) in our time together we were all laughing and listening to each other's reaction and poems. Many of the guys we knew from past workshops. There was Shane, who taught us all to snap like the Beat poets when someone finished sharing their poem. There was Eric, a very precise and gifted writer (I've often quoted lines of his poetry to friends). There is Scott whose poems pulsate with rhythm and energy. There were new guys too, like Dwayne, who is extraordinarily polite and pensive and remembers my name right away. "Thank you, Jason," he says very deliberately when I give him the free pen and workshop t-shirts we made for them.

On the way out Kristi (a professor of musicology by training) makes an incredible observation: here is an entire generation of young black men, from the poorest, most abused, and least educated parts of society, and yet they all have internalized an entire tradition and art form that is their own: hip hop. Eric's, Scott's, and Dwayne's poems were all musical, pulsating, rhythmic, and rhyming--they were completely informed and shaped by the art form of spoken rhythm rhymes of rap. Their poems this time were better than the three of us with our million dollar educations, PhDs and Masters degrees. We all sounded like were straining to do our best impression of Shakespeare or Sylvia Plath, but they just spoke in an art form that is naturally their own. What was striking is that many of the wealthiest and best educated in our society have no art that is their own anymore. Outside CL it is increasingly rare to find upperclass Americans who sing or play instruments together. As Kristi said, the rich and upperclass do "the neoliberal thing": they buy their art. Art is not living and accessible for them. They buy it and consume it--usually in private with headphones on. And yet it struck me as I walked away happy from the workshop that afternoon that is was a mercy to be with these men, who with everything that has been taken away from them are still generous enough to share with us their art.


I do not know exactly what Jesus's Kingdom of Heaven looks like. But I am certain that in the Kingdom of Heaven, young black men are not dying in the streets riddled with bullets. I'm sure in the Kingdom of Heaven these guys don't live on park benches while we live in our Santa Monica apartment. And yet Jesus always insisted in His central prayer to make it "on earth as it is in heaven" right now--not in a million years or in another lifetime, but today. Jesus is clear: the Kingdom of Heaven needs to happen now. All associations of men that mistreat each other are not yet this Kingdom and they stand condemned before it. These men had mercy on me the other day--because they didn't turn me away. They didn't say, "you rich people don't care, you just act like you do." They laughed and shared their art with us. For a short time, looking around that small circle of human beings, I think I saw something of what Jesus meant.#CharitableWork