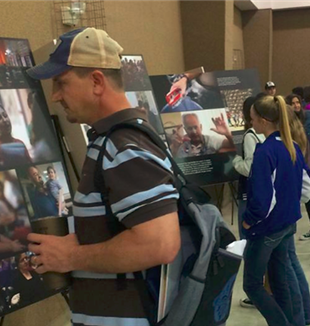 When I saw the exhibit about Christians in the Middle East at the New York Encounter I was instantly moved. I remember my awe at a faith that can save all things. A faith that turns our eyes away from nothing, but proclaims God’s name in all things. Almost instantly I began to beg Marta to let us host it in Needville, TX.

Just as background, Needville, TX is a very small town about an hour away from Houston. It’s the quintessential sleepy rural Texas town. Like most Americans, we tend to focus on local concerns. When I first went to the parish to propose the exhibit, I shared some the panels with them and told them why the exhibit was so moving to me. In many ways I felt exposed when I did that. Sharing what you care about and what you think is beautiful is a risk, as others may find the same things boring and irrelevant. Instead, several members of the pastoral council said that they were deeply moved by the message and felt exhibits like this were exactly what we needed. They even decided that the parish would host a meal for one of the nights that we showed the exhibit. So, it was a done deal and we arranged to have the exhibit sent to Needville.

The cost to ship and show the exhibit is not cheap. And we do not have a CL Community in Needville, but still my Needville friends offered to help bring this exhibit to town. One woman, who is our high school volleyball coach, approached me out of the blue at a school fundraiser, gave me $20 and said, “I want to contribute towards bringing this exhibit to our parish because this type of thing is important.” This woman and I hardly knew one another before, but we became friends through this exhibit. She spent an incredible amount of time helping to prepare the meal and personally went through the exhibit 3 times. This is a busy woman with 2 teenage daughters, but she said over and over again that this exhibit was very important and she was grateful to those who had developed it. It is really a witness to us. Another woman spoke at length with my CL friends who came in from Houston. She later mentioned to our friend, Nino, that she would like to do School of Community. I would never imagine to propose this here, but her interest makes me feel foolish for not proposing it earlier.

In between January when I first saw the exhibit, and April when the exhibit arrived, I became forgetful. I was going through the motions of getting the exhibit here, but had forgotten why I felt it was so compelling. The days before the exhibit opened, I was setting up the exhibit and with each panel, I let the faces and words sink in and once again, the beauty of this exhibit cried out. But besides my comments, I want to share some from the people who went through the exhibit.

A high school student wrote to me, “I thought it was really eye opening, the strength of those people’s faith is what we are called to also have.”
One of the CCE teachers wrote, “Uplifting is the biggest word I heard. There is a message about faith.”

One man after watching the video said to everyone present, “Wow, watching this I realize that I need to work on my own faith. The women in the video will stay with me for a long time.”

One man told me as he was leaving, “I don’t know if my faith could stand up if it were pressed like theirs. I hope it would, but I’m not sure.”

A marine who had 2 tours in Iraq spent a lot of time with the exhibit (literally the last person to leave Wed night). I asked him what he thought and he said, “when I was there, I saw these places but we did not meet the people. This is eye opening and I appreciate y’all bringing it here.”

One lady who wasn't Catholic said that she had stopped going to church years ago because she felt disconnected because of a divorce she went through. She said that seeing this exhibit made her wonder where her faith is right now and what she should be doing to strengthen it. To this lady we told her that our doors and arms are always open. It was so unexpected.

Most important for me is how working on the exhibit has been healthy for my own faith. We all tend to forget everything—even that life is a continuous gift. I am the most forgetful. I forget how much I've received, and the people who were given to me. We have no intention to forget...we just do. And then, all of the sudden, something like this happens, and my eyes and heart is opened, and all is embraced: the present, the future and the past.#MiddleEast