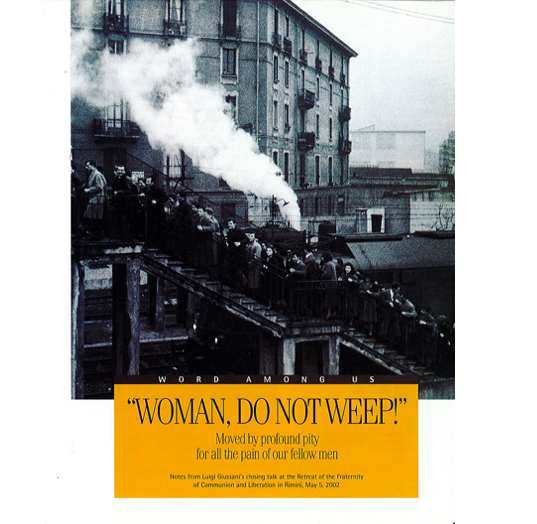 That evening, Jesus was interrupted, stopped on his journey to the village toward which He was heading, to which He had headed out, because loud weeping was heard from a woman, with a cry of pain that shook the hearts of all those present, but that shook, has shaken Christ’s heart first of all.
“Woman, do not weep!” He had never seen her, never met her before.
“Woman, do not weep!” What support could she have, that woman as she listened to the words that Jesus said to her?
“Woman, do not weep!” When we return home, when we go on the bus, when we climb aboard the train, when we see the cars lined up in the streets, when we think about all the jumble of things that are involved in the lives of millions and millions of people, hundreds of millions of people… How decisive is the look that a child or a “great” adult would have turned on this Man who was coming along at the head of a small group of friends and had never seen that woman, but halted when the sound, the reverberation of her weeping reached Him! “Woman, do not weep!”–as though no one knew her, no one could recognize her more intensely, more totally, more decisively than He!
“Woman, do not weep!” When we see–as I said to you before–all the movement in the world, in whose river, in whose streams all men present themselves to life and make life present to them, the unknown of the end is nothing but the unknown of how this newness has been reached, this newness that makes us come upon a Man, makes us encounter a Man never seen before who, faced with the pain of this woman He sees for the first time, says to her, “Woman, do not weep!” “Woman, do not weep!”
“Woman, do not weep!” This is the heart with which we are placed before the gaze and the sadness, before the pain of all the people with whom we come into contact, in the street, along our way, in our travels.
“Woman, do not weep!” What an unimaginable thing it is that God–“God”–He who is making the whole world at this moment–seeing and listening to man, could say, “Man, do not weep!” “You, do not weep!” “Do not weep, because I did not make you for death, but for life! I put you in the world and placed you in a great company of people!”
Man, woman, boy, girl, you, all of you, do not weep! Do not weep! There is a gaze and a heart that penetrates to your very marrow and loves you all the way to your destiny, a gaze and a heart that no one can deflect from His course, no one can render incapable of saying what He thinks and what He feels, no one can render powerless!
“Gloria Dei vivens homo.” The glory of God, the greatness of Him who makes the stars in the sky, who puts into the sea, drop by drop, all the blue that defines it, is man who lives.
There is nothing that can suspend that immediate rush of love, of attachment, of esteem, of hope, because He became hope for each one who saw Him, who heard Him: “Woman, do not weep!,” who heard Jesus say this: “Woman, do not weep!”
There is nothing that can block the certainty of a destiny that is mysterious and good!
We are together, saying to each other, “You–I have never seen you, I don’t know who you are: Do not weep!” Because weeping is your destiny, it seems to be your unavoidable destiny: “Man, do not weep!”
“Gloria Dei vivens homo.” The glory of God–the glory for whom He holds up the world, the universe–is man who lives, every man who lives: the man who lives, the woman who weeps, the woman who smiles, the child, the woman who dies a mother.
“Gloria Dei vivens homo.” We want this and nothing but this, that the glory of God be manifested to all the world and touch all the spheres of earth: the leaves, all the leaves of the flowers and all the hearts of men.
We have never seen each other, but this is what we see among us, what we feel among us.
Ciao!