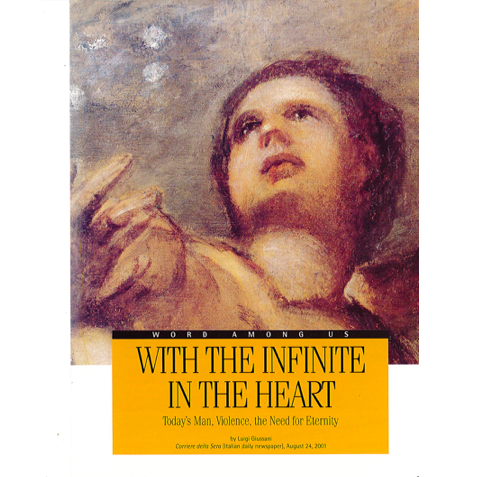 “Lord, we shall not go out from here unless You come with us.” These words of Moses in his sublime dialogue with God come to my mind in these days of upheaval, some of it violent, in Italy and throughout the world. What can give a man of today the assurance of being able to move about in safety when violence seems to corrode relationships and actions? Awareness of the inexorable positivity of reality: it is right here that the Church identifies God as the author and the affirmation of human life, who does not abandon life after calling it into being. And in fact, the Lord answers Moses, “I shall go with you.”

“God is not separated from the world,” the Pope wrote to the Meeting in Rimini, “but intervenes. He takes an interest in what man is living, He enters into dialogue with man, He takes care of him. All this is witnessed by the history of Israel,” a history that we feel also to be ours: every day on a journey, in and through the forest of errors and contradictions, so that we do not feel ourselves to be different from others. Indeed, we feel more and more distinctly just like everyone else, but we have something different inside us that has impact on our life.

This is why we can stay calm even during the storm, not as stoics indifferent to everything and everybody, but because we are certain of our path as we go ahead.

“All of life asks for eternity.” This phrase from a song written forty years ago by two high school students in Milan–which my Meeting friends chose as the theme for their gathering in Rimini–documents the first impulse which I feel describes my experience: a passion for humanity. Not humanity as the term of a definition for sociologists or philosophers, but the humanity that my father and mother have passed on to me. There is no humanity except in the “I,” otherwise it would be an abstraction in the name of which the most terrible injustices can be committed. Therefore, extreme seriousness is required for noting and grasping the needs and aspirations that define what is human.

The first line of the song I was just talking about says, “Poor voice of a man who is not there, our voice if it no longer has a why.” The threshold of why is the aspiration to a meaning that can explain and fulfill everything. A man who neglects this aspiration does not truly love himself: it is as though he were running away, as though he were always outside. He fills the silence with the clamor of his thoughts, being incapable or afraid of finding himself face to face with the nakedness, the poverty inherent in the deep needs and questions of which he is made up, for which his mother made him. He flees into distraction and normally seeks refuge in forgetting or, what is worse, in justifying what he does. In this way, ideology dominates not only society but also the little world of private relationships, in the family and between friends.

The dissatisfaction that lies at the end even of every success–because every success, after the first moment of giddiness, always presents a new problem–confirms that man is in search of his path.

The Christian event is the answer to the demand for the infinite which is the heart of man. So that man may walk along: “homo viator,” a man who draws near by the movement that has been put into him, that has been brought forth in him by the Mystery which makes all things and of which he is made aware by the encounter, the encounters of life.

Christ impacts our “I” in its totality, and thus all our actions are influenced and determined by this relationship. This, among others, is the reason why the Church, as Galli della Loggia wrote in the Corriere della Sera, “cannot be subjugated” to any power on earth. In the Catholic experience, the relationship with Christ is a relationship among men: it introduces criteria, purifies points of view, sustains in disappointment, suggests solutions, and above all it does not permit partiality or taking sides but tends to the recognition and facing of all the factors that make up reality. Yes, all the factors in relationships, in society, in politics, which should be the area where this totality of factors is taken into consideration. In this way, the responsibility for granting salvation would not be unloaded onto politics. The century just past has shown that this claim of politics to grant salvation turns into partiality, factiousness, ideology, and the modern idol–“usury, lust, and power,” to use Eliot’s words.

For the Christian who is faithful to the Pope and the Tradition, there is no expression of life which cannot feel the impact of awareness of the relationship with Christ. In our experience, this relationship pushes one to recognize a truth that unceasingly renders us, in the face of all the problems that arise, without pretense, without preconceptions, indomitably open to everything and everyone, humble and continuously capable of changing and of picking up again where we left off.

To try to live within this point of view is the approach to reality that has been given to me as my heart’s obligation by the One who has loved my life.