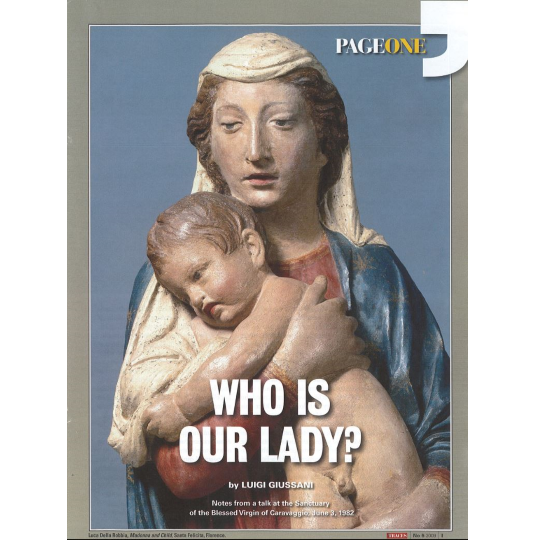 Every time we gather to pray to Our Lady, I experience a shiver of emotion. The angel, presenting himself to Mary, says, “Hail, O full of grace.” And Mary, visiting Elizabeth, says, “All generations will call me blessed” (Lk 1:28-30). It’s an emotion because, coming here, we are now fulfilling that prophecy. This evening, we give our contribution, testifying that the prophecy comes true: they will call you blessed.

Today, this young Israelite, Mary, wants to call us to a mature faith. From such a young woman (at the time, she was about 15 years old), we learn about maturity of faith. If faith doesn’t become mature, it’s vain, emptied by the anti-Christian climate of our time.

Looking at Mary, we now want to see what the factors of mature faith are, that is, when faith is mature. In doing so, I don’t mean the effect that mature faith provokes (that is, a mature faith is steadfast, doesn’t let itself be overwhelmed by the environment); I want to speak of the factors that constitute faith.

Let’s examine the passage of the Annunciation (Lk 1:26-38). As early as this moment, this young woman demonstrates a full awareness that her life belongs to an Other.

1. In fact, this is the first factor of vocation; life, in Christian terms, is a vocation.
In order to feel life as vocation, I need the awareness that my life belongs to an Other. This consciousness in Mary isn’t abstract. In fact, there are two things that define Our Lady’s belonging to God, in her concrete life:
a) Mary had to decide about her future, her concrete life, what she should do and how she would become a mother. Our Lady belonged to God in the concreteness and in the determination of what she would have to do–just think how she must have suffered in the beginning, when she alone knew what had to happen! The Lord was asking her for her time, her days; she belonged to God in the physical modality of her time.

b) Our Lady thus clearly understood that her life belonged to an Other, in the concreteness of facing daily life. All of herself belonged to the Lord through a precise bond, the bond of her people.

Her life was inside that of her people, immersed in it. What the angel communicated to her was within the history of her people. In fact, the design that God develops in the world is through solidarity, brotherhood, a bond of a people. Paul VI’s words come true: Christians form in the world a kind of sui generis race.

Now, if we apply these observations to ourselves, we note that it is evident that your life belongs to an other (I don’t make myself). It is within the everyday determinations (in work, in all you do, whether you want to or you have to, in your toils, in your joys, etc.) that you belong to an Other, in every instant.

If we had this awareness (that is, of the One to whom I belong) when we formed a family, went to work, faced anything of our day, if we thought that there, we were building His people, that there, we belonged to His people, what nobility we would feel in our existence!

In conclusion, for a mature faith, the first factor, therefore, is acknowledging a Presence that possesses me in everything. It possesses me to achieve a plan that is called the “people of God,” and therefore nothing I experience is useless; not even one second is in vain. We should be aware of everything we live, because everything is for His plan.

2. Continuing to follow the passage of the Annunciation, we see now the second factor of a mature faith.
The angel spoke to her, saying, “Do not be afraid, Mary, for you have found favor with God… the Lord God will give Him the throne of David His father” (and here we see the bond with the people). Mary said, “May it be done to me according to Your word,” that is, fiat (cf. Lk 1:30–38). This fiat is the second element for a mature faith; it is the energy of that yes, as Saint Paul will call Jesus, the “Amen,” the “yes” of God (cf. 2 Cor 1:18-20).
This energy is the power of will, or better, of freedom.

The freedom that adheres says, “Yes, I acknowledge.” However, there can be an acknowledgment that doesn’t accept, that doesn’t get involved. In this way, my faith becomes feeble, empty, meaningless. It’s important to underline the reasonableness of that “Yes.” Why did she say yes?

In the mystery of that moment, Our Lady intuited that it was precisely the announcement of God, true God. And so it has happened for us, as well. In fact, each of us is Christian because, in some way, the intuition, the understanding that Christ is true, the Church is true, the Christian mystery is true, has grasped us, even just for a moment. All of us have had this intuition.

The greatness of Our Lady is her simplicity: she said, “Yes.” Period. She didn’t ask for anything else. We, instead, always need something else, some extra proof in order to decide.

Christ defined maturity of faith by comparing it to a child. A child instinctively feels that he belongs to his parents, and in the face of things says, “Yes,” and opens his eyes wide. He doesn’t ask further confirmation of what he sees. What the child does through an instinct of nature, the man of mature faith does consciously. Therefore, the maturity of faith is the child that from instinct becomes consciousness, with the same simplicity.

Let’s think of Mary now, left alone at home, alone before that enormous thing that was proposed, that was said to her.

She could have said, “I didn’t hear anything; it was an illusion!” But it didn’t happen this way. From this springs the third factor of the maturity of faith: the energy, the power to remain in the Lord, to stay with what has been seen.
Instead, at the first difficulty, we object, saying, “It’s not true.” Mary is alone, struggles, but is “firm.” Hers is a simplicity with a great and simple strength. Even Abraham complained, and Moses trembled, but Mary is certain in her solitude. Mary is a fortress, great and simple. Giannetta, here in Caravaggio, and Lucia in Fatima, also experienced the same solitude, but were upheld by the same certainty, were firm. She had dauntless simplicity (that is, full of emotion), that challenged all of life alone with “that thing” said to her–alone before the people who don’t believe, before the work she had to do: there’s solitude, and there’s her adherence to the Lord.
The thing in us that must never fail is the adherence of our faith; when the emotions are no longer there, when you no longer have the initial drive, when your friends aren’t there, what must remain is our faithfulness to the adherence given to Christ.

Thus, the three elements that distinguish the maturity of faith are:

1. The awareness of belonging to an Other (belonging with your own burdens, your own sins, to the visible body of Christ, His Church).

2. The energy of the “yes”: simplicity of freedom. Nothing becomes an objection. This simplicity makes us live as conscious human beings. (You have to say, “Yes,” because with “buts” and “howevers” you’ll never be convinced.)

3. Faithfulness: the energy to remain in the Lord, in His Church.

Now, I’ll read what for me is the symbol of our poor personal and collective life, unlike that of Mary’s: “Why couldn’t we cast it out?” … “Because of your little faith,” Jesus answered. “Nothing will be impossible for you” (Mt 17:20).

In today’s world, from the point of view of Christians, we’re like epileptics: one moment, full of emotion, and another, cold, without hope or energy. We’re fragile and inconstant, and this fragility and inconstancy undo faith. Therefore, faith loses its fascination, its power: “Those who follow Me will have the hundredfold here on earth…” (cf. Mt 19:29; Mk 10:29-30; Lk 18:29-30). We’re not like those who’ve lose their faith; instead, we’re fragile and inconstant. What is the means for casting out this “demon”? Jesus also says it: prayer and penitence, fasting.

Prayer is the acknowledgment of something greater than us: Christ among us. With prayer, Christ becomes familiar to us. Being conscious of this presence (and this is exalting, a new profundity, because it is the awareness of God that governs our body) means dispossessing and losing ourselves; not possessing anymore–we have everything, but we’ve been torn away from everything. This is fasting: the full-hearted courage of sacrifice. This detachment from everything makes the passion for Christ grow more; once again, Mary under the Cross is dispossessed of what was given to her. In fact, Jesus, turning to her from the Cross and pointing out John to her, said, “Woman, behold your son!” (Jn 19:26). What’s more dispossessed than this? And yet there, she possessed even more the consciousness of her belonging.

Speaking in Christian terms, what is the detachment in having things? It’s virginity: it’s the ideal of the Christian life, the true possession of things. It’s a value to be lived in all vocations. This courage of sacrifice makes us possess everything even more, because everything belongs to Christ, as I belong to Him.

The indicator of the maturity of faith is memory, by which Christ, made present among us, becomes familiar to us in every place (not only in church) and from this arises the courage of possessing things in virginity, as the Virgin Mary taught us.