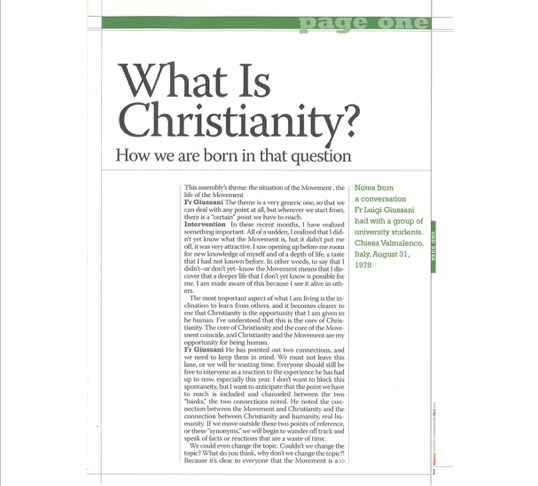 From humanism onwards, Christianity has tended to be reduced to wisdom (the best way to live, the most excellent human philosophy), up to today, or to a morality (the best way to love our fellow men, the prophecy of humanity). It has been reduced like this, and reason will always try to do this, because otherwise Christianity will dominate wisdom. If, instead, reason can reduce Christianity, then it can prevail; reason will judge Christianity. Instead, Christianity is a fact. You can be angry because it’s there, because it has happened; you can blaspheme, you can skin yourself alive hysterically because you don’t want it to be, but factum infectum fieri nequit: you cannot make a fact not a fact.
It is a fact that holds an element of challenge for the future, because tomorrow is not yet here, and this fact, which has reached us over two thousand years, and in which we, too, are implicated, says, “Look, after 34,000 years, I’ll still be here, and after another 3,400,000 years I’ll still be here.”

But it is a fact! Christianity is a fact! That is why our faith, our being Christians, is first and foremost a fact that you cannot get rid of, try as you might, because it is Baptism that took hold of you; it’s a gesture that took hold of you and drew you into the fact, and you cannot get out of it.
I keep on insisting on this point because nothing like this can give our life the power of certainty, the energy of what is certain. It simplifies everything! It doesn’t depend on your mood, on what you have felt or haven’t felt, on your opinion, on what is clear or unclear for you. Christianity is a fact that has this as its content: the appearance of a fact, the form of a fact is a Man who has spread through history by assimilating to Himself the people He takes hold of, and the content of this is that this is the presence of man’s salvation to man, of the meaning of history, the presence of the meaning of history, of man with all his various connections, because history is made of me with all my connections, with everything connected with me. History is this; without me there would be no history.
Now we can understand the two most important riders to this answer, the two fundamental corollaries. The first is that if you don’t come across a Christian or a Christian reality that tells you this, if you don’t meet up with a prophetic moment (prophetic means a person or a reality that tells you this; prophecy is proclamation), if you don’t come across a person or a reality that tells you this, then it’s as if for you it didn’t exist. This is the phenomenon of encounter. The phenomenon of encounter is, for our being Christians, like Pentecost was for the relationship with Christ that the Apostles had, because if Pentecost had not happened, they would have remained a bunch of fools, with this great but useless tragic memory inside them. So the encounter is the spirit of that man, or of this fact, that communicates itself to you; the encounter is the spirit of that fact that communicates itself to you. And the spirit of that fact communicates itself through something quite ordinary, tongues of fire, a fire, a thunderclap, like the fleeting ordinariness of any man whatever, of any group whatever.

I once went to Brescia to speak about “Communion and Liberation and Our Lady” at the National Marian Convention. As I arrived, Fr Maggioni (who is one of the few who talk seriously) was saying, in a discussion with another priest (he had given the Biblical lecture), that the crime of the Church today, the great shortcoming of the Church today, is that there is an ecclesiastic structure without the event. The encounter is that fact which becomes an event for life. Because, he said, without the event, that fact is as if non-existent (as I just said).
Think of the breathtaking importance that the ordinariness of an encounter takes up! Think of how we need to adore the presence of things so ephemeral as the names and the faces we have encountered, or as our groups, our community! Think of the eternal value these “stupid” things have.
The encounter is the first corollary. If it is a fact, then this fact is noticed, innotescit; you become aware of it through an encounter. This is Pentecost–in other words, the fact becomes an event for you, in your life. The historical event becomes event for you through an encounter.

Second corollary: Since the Christian fact is a man or a reality, a human presence (a human presence!) that claims to be the meaning of your life and the meaning of history–of your life, with all its relationships (remember that my life and the cosmos are the same thing, because the cosmos and history are my life with all its relationships, so they are my real life); since the content of this fact is the presence of a man, a human reality that says, “I am the meaning of history, of the cosmos, and therefore your meaning; I am the meaning of your existence and the existence of all things,” this fact is destiny made present; it is destiny that has become a presence, the presence of destiny, of my destiny and of your destiny, everyone’s destiny, and I recognize it through an encounter… Listen, what is the most important thing in your life? Your destiny. What is the most important thing in my life? My destiny. If my destiny and your destiny are the same thing, then we are living the same thing. This is communion, unity among men. What is impossible, here becomes so real that it becomes the moral law. The only moral law is unity, or charity. Thus, in communion, that fact becomes the new face of humanity, of society and of history.
Now, what I have described is the Movement. The Movement is only these things, and nothing else.
I don’t know if in Rome, in Pescara, in Bologna, and so on, we have lived the Movement with the awareness of these things. All I want to say is that the growing awareness of these things is the attraction, the only attraction of the invitation we’ve received. And it’s our only strength, in the face of anyone and anything, even were we to remain alone.

“This is the victory that conquers the world: our faith.” So, what conquers the world is the meaning of the world.
So the question we have substituted for the one we had this morning was only a switch in terminology, because the answer to “What is Christianity?” is the answer to “What is the Movement?” Actually, the question was, “How is the Movement going?” but, now, I believe we have the criteria for deciding how we are to go on.
I don’t know if you heard that piece of Jeremiah the other day, the reading for the martyrdom of St John the Baptist, when the Lord told Jeremiah, “I will make your face like a wall of bronze before them. They will attack you, but they will not prevail.” The wall of bronze is the “hard face” against any kind of assault, against the assault of what is different–in other words, against the assault of what is not the meaning–because what is different from this is what is not; it is falsehood. “The world is set in falsehood.” Because the world is not the pretty stars, the pretty face of a woman, the children who are growing… The question is the meaning with which a man lives his relationship with his wife, with the stars, and with his children. Because man is the animal who approaches everything (even himself) through the interpretation of a meaning.

So what is not this is falsehood! What gives us a “wall of bronze” against what is different is faith–that is, the acknowledgment of this Presence that has become event in our conscious life (and here is where our maturity began) through an encounter, and lives in my life only in as much as it is joined with yours, in other words in communion. This is true in my life, in as much as it is joined with yours, and not because I get together with you once a day to say morning prayer or see you 44 times a day because I hold 44 meetings, as it would still be the case if I were to be alone in America for 6 months! Your relationship with money, with time, with work, with your girl, with strangers… is with you; it is felt, conceived, approached and lived in the awareness of my belonging.
It has to do with everything I do. Why do people go to work? To earn their living or, in exceptional cases, out of interest in science or technology. Why do people marry? People marry because… they marry. And why do they have children? Because... because... they just do. And why do people eat? In order to live. Okay. All these answers have to be broken apart and replaced, or rather something else has to be born inside. The phenomenon is called transfiguration, in the Christian sense.

We do all this to build up the witness to Christ in the world, in other words, to build up unity, communion. Or, as the psalm said this morning, “Lord, I love the house where You dwell, the place where Your glory abides.” All we want is to build this.
It is through what we do that we build, because nothing is marginalized or censured. This is why we live the concept of transfiguration, because we are overwhelmed by “something else,” so that “whoever has a wife lives as if he did not, whoever has possessions, as if he had nothing, and whoever uses things lives as if he didn’t use them” because what is seen at first glance is not the true face of things. It is like another world.
To conclude, at least for the time being, what you experience is really like a new humanity.
So, the concept of experience and all the rest you have said is correct, because all the interventions had something correct. It is the experience of a new humanity, something just beginning, if you like, but justice, what all mankind hopes for, is this humanity that is beginning to dawn in us; justice is the final outcome.
This is not just one more thing alongside the problem of social justice. It invests the problem of social justice, too, and transforms, or transfigures its terms. It doesn’t marginalize or censure anything.
So then, how have our communities lived the Movement this year?