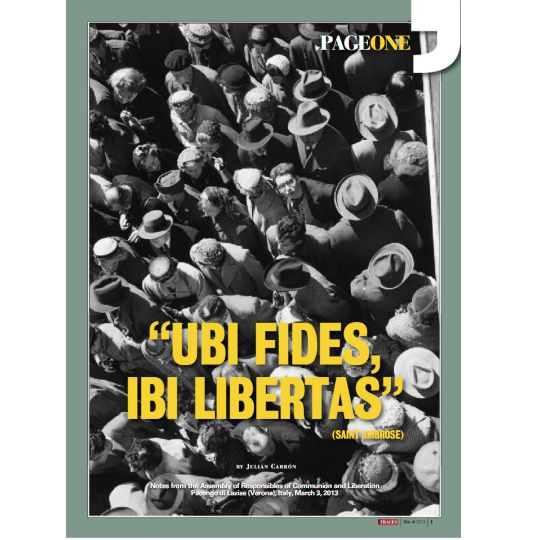 3. The Relevance of Faith to Life’s Needs
Not just any “we,” not just any place, is good enough, because we can become an association instead of a movement, and we can start over without having learned anything. This is where the challenge of the Year of Faith, the Synod with its call to conversion, and the Pope’s gesture of renunciation come together. Friends, if we don’t verify the relevance of faith to life’s needs, precisely in this situation that we are going through, then our faith will not be strong enough to endure and we will not have adequate reasons to be Christians. We can stay with CL, but our interest will shift elsewhere: Christ will no longer be the center of our affection, Christ will no longer be what we hold most dear. Fr. Giussani’s challenge will always be there, in front of our eyes: either faith is a present experience that is confirmed by it... And what is the confirmation? That it is useful in responding to life’s needs, from the education of our children to politics; from the problem of illness to the problem of work; from the most personal problem to the social one. Otherwise, it will not be a faith capable of enduring in a world where everything–everything–says the opposite.
If our experience of faith is not the constant discovery of its relevance to life’s needs, and thus the needs that we have at work or when faced with the election, then the beginnings of dualism are introduced. This is where the challenge lies: is Christ so real that He can respond to our needs? Is He so real–as Saint Ambrose witnessed to us–that He makes it possible for a man to challenge the emperor, that He makes him that free? Man’s life hinges on satisfaction, as Saint Thomas Aquinas reminded us: “Man’s life consists in the affection that principally sustains it and in which he finds his greatest satisfaction” (Summa Theologiae, II, IIæ, q. 179, a. 1). Therefore, either we have the experience of a real satisfaction, because Christ is not abstract, but real–as the Pope witnessed to us with his gesture–or, not finding this satisfaction, we look for it elsewhere, in the crumbs dropped by those in power. But crumbs are not enough for the capacity of the heart. If Christ is not the experience that satisfies us, then, like everyone else, we depend on the outcome of other things: elections, our careers, our own projects. Only by taking all of our need seriously can we understand what the Christian proposal truly is, what sort of promise the presence of Christ makes to our lives. Otherwise, we are like everyone else: when things go well, we are happy, and when they go badly, we are disappointed. Never free! The freedom of the Pope’s gesture is based on a fullness, that fullness that comes from the relationship with Christ present. When we lack the awareness of what we are and don’t accept the problematic nature of life–which gives rise to our need for totality–then we don’t even realize what Christ is, what the value of Christ is for us. And then faith is at risk: Christ is unable to take hold of the “I,” and if He doesn’t take hold of it, then we become loose cannons.
Therefore, it’s time to sum up, that is, it’s time for each of us to look at himself and say: have I emerged from this period–all of this year, in which we were ceaselessly challenged–with more certainty regarding Christ or not? Because otherwise, happy or dejected, we have wasted our time. We get worked up here and there, but we are virtually disappointed by faith; faith is emptied because we don’t see its relevance to life’s needs in our experience. We can’t start over by simply changing our rallying cry or our strategy, but only by conversion. If we are not converted, if we do not have a real experience of Christ present, then we repeat the reductions and errors that we have already tried.
This past year is a very powerful call from God to conversion, and therefore to that experience of fullness and freedom, generated by the contemporary presence of Christ, that is the only thing capable of challenging the image that many people have of us, at least here in Italy: a political group looking for power. If we don’t have the experience of this fulfillment, of this human diversity, then we will not be able to respond to the challenge of the situation.
The Mystery demonstrated to us that this experience is possible with Benedict XVI’s disarming gesture, with his certain, joyful face. Each person can say whatever he wants, but behind the closing door of Castel Gandolfo was the joyful face of a man. Saint Ambrose’s famous phrase acquires a particular density for us now: Ubi fides, ibi libertas (Ep. 65.5). “Where there is faith, there is freedom.” Faith is the recognition of a present Presence, so real that it makes freedom, happiness, and joy possible. This is the meaning of the Pope’s gesture.