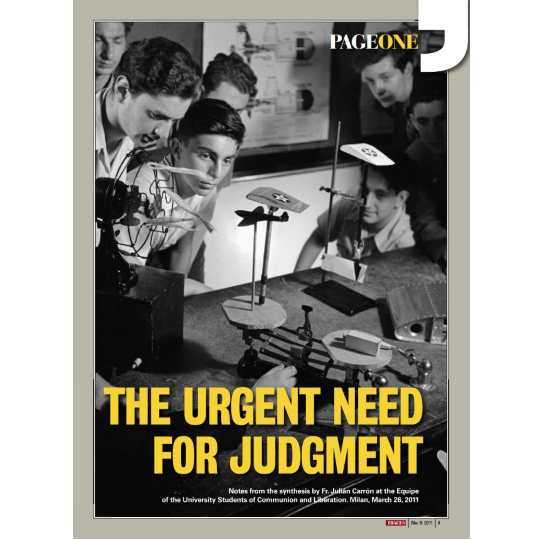 1. THE GENERATION OF A SUBJECT WHO
IS NOT ALIENATED
Fr. Giussani grasped the crucial point: "As a result of the education I received at home, my seminary training, and my reflections later in life, I came to believe deeply that only a faith arising from life experience and confirmed by it (and, therefore, relevant to life's needs) could be sufficiently strong to survive in a world where everything pointed in the opposite direction" (The Risk of Education, The Crossroad Publishing Company, New York, 2001, p. 11). This is why he always insisted on the need for each of us to start from experience, to focus constantly on experience. Otherwise, nobody would be strong enough to hold out in a world where everything, everything, says the opposite. It is the same need that is noted in other terms in the first pages of The Religious Sense, as we have discovered reading the text together in these months: "If I did not begin with this existential inquiry, it would be like asking someone else to define a phenomenon that I experience. This external consultation must confirm, enrich, or contest the fruits of my own personal reflection. Otherwise, I would be substituting the opinion of others for a task that belongs to me, and, in the end, I would form an inevitably alienating opinion" (The Religious Sense, McGill-Queens University Press, Montreal, 1997, p. 5). Fr. Giussani wants to make us become adults, subjects capable of judgment; he does not want us alienated. Thus, his words in another passage of The Risk of Education are very significant: "The purpose of education is to fashion a new human being; for this reason, the active factors of the educational process must guide the pupil to act with increasing independence and to face the world around him on his own. To do this, we must increasingly expose him to all the elements of his environment, while also gradually allowing him more responsibility for his choices. This is in agreement with the outlines of an evolutionary path according to which the pupil must, at some point, be able to 'do it himself' in every circumstance. The teenager must be guided gradually as he matures toward a personal and independent encounter with the reality that surrounds him. It is here that the educator's stability becomes important, for the increasing autonomy of the student is a 'risk' for the teacher's intelligence and heart, and even for his pride. Then again, it is precisely the risk of confrontation that helps create the pupil's personality in his relationship to all things; it is here that he develops his freedom" (The Risk of Education, pp. 80–81). This is what motivates the continual insistence on judgment, the need for comparison between what we live and the heart. This work is as simple as it is unpopular, as we have seen. It is very easy, in fact, to repeat formulas or go from quote to quote, however correct, or to appeal to another to supplement the certainty I lack. But, as I always tell you, you have to decide to become adults or not, that is, to live an experience that enables you to stay in reality through the judgment that emerges from experience itself, or to be increasingly prey to all the fears as soon as reality does not coincide with the image you have in your head.

4. CHRIST RISEN: A JUDGMENT ON US AND HISTORY
To the degree to which all this truly becomes experience, we can understand the importance of the Christian announcement for ourselves and propose it as judgment to the world: what we need, because of its objectivity, is what the world needs. This is why this year's Easter poster returns anew to the origin. How did these posters begin? As a judgment on history and on ourselves. What do we say in the face of the tsunami or war or the weakening of the "I," that is, in the face of that lack of judgment in which one feels humanity disappearing? Our judgment is the content of the Easter poster, which asks two fundamental questions.
a) The affirmation of the fact: Christ is risen. If Christianity is less than this, it is not worth it; it is no longer Christianity. It would be reduced simply to the patrimony that a great human personality left to us. What do we do with this patrimony when faced with something like the recent tsunami in Japan? As the Pope says [quoted in the Easter poster], "we would be alone" with our absolute incapacity. "Only if Jesus is risen has anything really new occurred that changes the world and the situation of mankind. Then He becomes the criterion on which we can rely."
b) But in order for this statement to be a judgment, in the sense described before, there has to be an experience in the present. This is why we have taken up again a text of Fr. Giussani [for the Easter poster]: "What we know [that Christ is risen] or what we have becomes experience if what we know or have is something that is given to us now [now]–there is a hand that offers it to us now, there is a face that comes forward now, there is blood that flows now, there is a resurrection that happens now. Nothing exists outside this 'now'! Our 'I' cannot be moved, aroused, that is, changed, if not by something contemporaneous–an event. Christ is something that is happening to me [now]." When do I see it? In the fact that I can stay in front of reality without fear, that I can look at everything without being ultimately defeated. If I am not defeated, it is not because I can give all the explanations, but because of something that is happening to me now and that stops my reason from being overcome with fear and becomes measure, making me seem–as our friend testified about his dying grandmother–that everything I fail to understand does not exist and has no meaning. The affection for Christ that is happening now, for Christ, a contemporaneous presence, helps reason be faithful to its true nature as reason: openness to reality. Any other judgment is false, simply false, because it eliminates this factor.
What saves us is not a deduction; it is an event that happens now. Christ is something that is happening to me now, and thus changes me, determines my present, is the most determining factor of my present, more powerful than any tsunami, any pain, any disease, any death, because I cannot shake it off now.
We can communicate this hope to everyone, distributing the Easter poster at the university, if first of all it is a work for us; otherwise, we will give the right doctrine without participating ourselves in the newness it brings. But we communicate nothing unless it is as experience, and thus we can give our contribution to others only if we yield to the event that Christ is now, if we are so simple as to experience what is given to us now. The others will decide later with their freedom. This Easter poster is the grace that happens to us now. Who, to stay in front of everything that happens, has the opportunity to have such a decisive instrument in their hands, one that offers us at the same time a method, a road, a journey to travel so that what we say becomes ours, without discouraging us with what is still missing, but already participating in the victory that we begin to taste? Distribution of this poster is a stupendous opportunity for all of us; it is the most adequate instrument for our moment in history for participating in the victory that Christ is in history. Communicating it to others and seeing what happens is in the best interests of everyone, in order not to miss the confirmation of the truth of the words we find written there. We have nothing greater to say to the world. This is why it seems to me a stunning challenge for each of us. ­