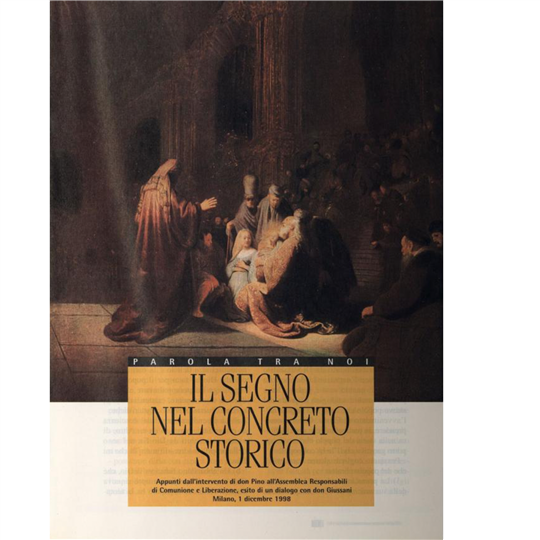 Here is what was said during a conversation with Fr. Giussani about a fundamental consequence of the fact of the Incarnation.

The work we have been asked to do in this moment of history is to deepen our awareness of what generates the "I", taking as a starting point a judgement on the experience we are living.

A unity of consciousness-a unity in the relationship with oneself, with reality and with the world, reaching into politics and society-is possible in the context of the great question of faithfulness to the origin.

In this work of deepening the original constitutive factors of the "I" we stress the genetic relationship of the "I" with the People.

The meaning of the word "People" that we want to deepen in our work this year is still very strange to us. In order to understand the original characteristics of the People that we belong to the reference that God himself has established is enlightening: to consider the experience of the Jewish People since this is pedagogical and prophetically analogous to that of the new People that has its origin in the event of Christ. In particular we need to understand what the genetic relationship that the "I" has with the People means in the history of the Jewish People.

We can identify some characteristics of the Hebrew People.

2. What keeps the People together? What is the point that keeps on suggesting to the People the ideal image, even to the extent of concrete operative propositions for the answer to the historical instant? It is the memory of what has happened, the memory of God's initiative as choice and covenant.

Memory is the supreme possibility of suggestion in the People's being and in its action, so much so that it coincides, for each individual, with his own self-awareness: "Hear O Israel, the Lord is your God, the Lord has made you, the Lord has chosen you."

What characterises the content of the self-awareness of the "I" is the memory of what God has done for his People, which reaches each one personally and that is expressed historically and existentially according to the following characteristics:

1. Original dependence: the awareness of being made, moulded by an Other. Of being known by God from one's mothers womb: "I am You who make me."

2. A trusting abandonment to God, recalled again and again by the prophets, every time the People is tempted to swell up with personal pride, or in a presumed self-sufficiency (think of the history of David), every time the People is tempted to consist in itself, in what it does, in a historical outcome and to measure God's faithfulness by this historical outcome. When this happens, in the life of the Hebrew People forgetfulness takes over: and the consequence of this is always punishment, to the point of dissolution, and even exile. God has the kingdom he had given to David literally disappear, and even has the People taken far away and scattered amongst the pagan nations and their foreign gods. The punishment due to forgetfulness is precisely the historical failure of the point that seemed most durable, which on the contrary reveals itself as the most ephemeral; it is the illusion, to use a modern expression, of hegemony, of success, of the expansion of the kingdom in socio-political terms, or the dominion of other peoples. Thus the loss of trust in God, which is replaced by trust in their own strength, has the Hebrew lose his originary belonging and make the criteria of the pagans his own.

The People conceives of itself as the custodian and the protagonist of this messianic consciousness: the expectation of an Other who is to come, the expectation of the Messiah coincides with the awareness that this will be the answer for all, and that it will pass through the history of the one chosen People. It is through this awareness that God guides the world, that God moves reality. God enters into history, at first as the one who arouses the promise, but then later reveals that he himself is the promise; and this indicates in the present its definitive meaning: the present is the beginning of the eternal.

In the hope of this expectation, in the hope of Him who is to be sent, we can find synthetically implied all the constitutive factors of the Hebrew People: the certitude that is not based on its own strength, but on the memory of the origin, of the fact that happened, in other words of being the one People, the only one chosen to live the covenant with God, a covenant to which God would always be faithful.

Historically this is true: the only people in history up to the time of Christ that had such a pure conception of God was Israel; the more God intervened in history, in the flesh of their existence (through great achievements and disasters, fidelity and sin), the more their awareness of the Mystery developed: the awareness in history of this gratuitousness and faithfulness on God's part (hence the awareness of God as Omnipotent, Inscrutable, the final Judge of all humanity) and above all, the awareness that God has his judgement on the world and on history pass through that particular, that People with whom he had identified himself. Hence the Hebrews' awareness of their historical task of being the consciousness of the world, the place through which salvation passes, through which God judges everything, through which something new enters history for all men as an answer to their desire for salvation and happiness.

When we look at our own history we become aware of these factors, because they constitute our present, too, and determine our future.

These categories that constitute the raison d'être and the content of the awareness of the Hebrew People, inherited and deeply transformed by Christ who brings it to completion, become the content of our self-awareness.