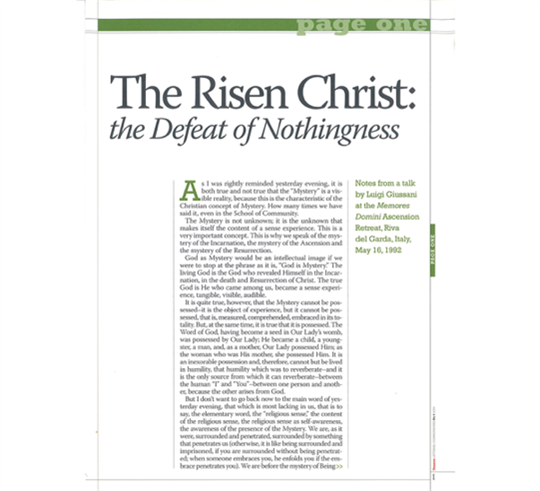 As I was rightly reminded yesterday evening, it is both true and not true that the “Mystery” is a visible reality, because this is the characteristic of the Christian concept of Mystery. How many times we have said it, even in the School of Community.
The Mystery is not unknown; it is the unknown that makes itself the content of a sense experience. This is a very important concept. This is why we speak of the mystery of the Incarnation, the mystery of the Ascension and the mystery of the Resurrection.
God as Mystery would be an intellectual image if we were to stop at the phrase as it is, “God is Mystery.” The living God is the God who revealed Himself in the Incarnation, in the death and Resurrection of Christ. The true God is He who came among us, became a sense experience, tangible, visible, audible.
It is quite true, however, that the Mystery cannot be possessed–it is the object of experience, but it cannot be possessed, that is, measured, comprehended, embraced in its totality. But, at the same time, it is true that it is possessed. The Word of God, having become a seed in Our Lady’s womb, was possessed by Our Lady; He became a child, a youngster, a man, and, as a mother, Our Lady possessed Him; as the woman who was His mother, she possessed Him. It is an inexorable possession and, therefore, cannot but be lived in humility, that humility which was to reverberate–and it is the only source from which it can reverberate–between the human “I” and “You”–between one person and another, because the other arises from God.
But I don’t want to go back now to the main word of yesterday evening, that which is most lacking in us, that is to say, the elementary word, the “religious sense,” the content of the religious sense, the religious sense as self-awareness, the awareness of the presence of the Mystery. We are, as it were, surrounded and penetrated, surrounded by something that penetrates us (otherwise, it is like being surrounded and imprisoned, if you are surrounded without being penetrated; when someone embraces you, he enfolds you if the embrace penetrates you). We are before the mystery of Being like this–we must be before the mystery of Being like this in the morning, or in any moment of the day.
As we recited the Benedictus, I was thinking–I often do when I recite the Benedictus, because it is the most intense prayer, the prayer that most expresses our certain expectation, our possession that is not yet possession, of the still incomplete possession–first, during the Psalms, I was thinking of the idea, of the prayer, that the Lord enlighten His people: “The Lord has enlightened His people, enlightens His people,” or better, “He has enlightened His chosen ones, He enlightens His chosen ones.” I always think that we are amongst these chosen ones! May the Lord enlighten these people without whom I am not myself! It is an impatience that life must fathom during the day, in the humble expectation that the prayer expresses.

There is a word that we have already used and that we now have to set at the center of the question of created reality, of the question of our creatureliness, of my creation, our creation, the creation of the whole world, as it can be born only from the rebirth that faith in the risen Christ can bring about. I’ll read a piece from Dante’s Divine Comedy:
“I well discern, How in thine intellect already shines/ The light eternal [in your heart the light eternal shines: it is need for the infinite, and dissatisfaction has this term of comparison], which to view alone/ Ne’er fails to kindle love [it makes us lovingly affirm what is of value, authentic reality]; and if aught else Your love seduces [if some other thing seduces your love: our judgment and our affection], ’tis but that it shows/ Some ill-mark’d vestige [if “aught else your love seduces,” this other thing is nothing but “some vestige,” a sign not understood in its nature, because it does not refer you to something else; there is a vanishing point in everything, through which it is in relationship with the infinite; you take it, you possess it, you think you possess it, except there where it becomes truly itself, so you tell a woman, ”I love you” and it’s a lie, or you say, “I am working,” and it’s a lie, a lie told to things, a lie told to the time you dedicate to things, a lie to the companionship and the people you serve, or should serve, with your work],/ of that primal beam [that beam inside the thing which attracts you].”32 “Whether you eat or drink, you are Christ’s; whether you wake or sleep, you are the Lord’s; whether you live or die, you are the Lord’s.”33
Do we want to tear things away from what constitutes them? “All things consist in Him.”34 This man who is risen, is risen to cry to everyone, it is the cry with which the Mystery of the Trinity cries to the whole universe, to the whole world, to the whole of history that that man, the Word made flesh, is what everything consists of. If all consists of Him, do we want to tear people and things, time, space, plans, from what they consist of? Fault, decadence, falsehood, nothingness… For this reason, the Liturgy in this time says, “O great and mysterious God, who in the risen Lord brings mankind the eternal hope…”35 Everything has a vanishing point towards the infinite, the eternal, and that is what attracts you, because it is according to the measure of your heart. Do we want to establish relationships with people and things without eternal hope? If there is no eternal hope, we lose them; though we have them, we lose them; as we grasp them, we spoil them. “You who have freed us from darkness with the gift of faith,”36 illumine the night that is advancing. He has freed us from darkness with the gift of faith: it is light, not darkness; the truth, not what appears to us–the truth as it appears to the angels of God, to the heart of a child, for his sounds and his measure, but, more precisely, to the poor in spirit, to poor intelligence, as I said before.