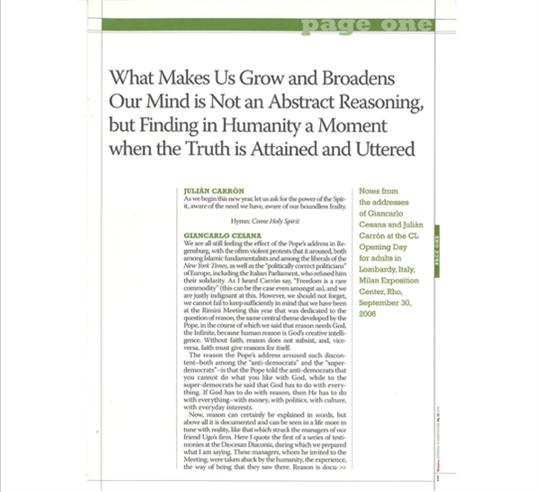 Julián Carrón
As we begin this new year, let us ask for the power of the Spirit, aware of the need we have, aware of our boundless frailty.
Hymn: Come Holy Spirit 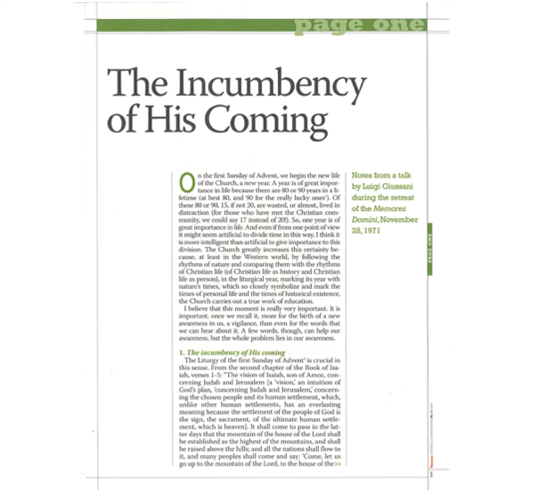 On the first Sunday of Advent, we begin the new life of the Church, a new year. A year is of great importance in life because there are 80 or 90 years in a lifetime (at best 80, and 90 for the really lucky ones1). Of these 80 or 90, 15, if not 20, are wasted, or almost, lived in distraction (for those who have met the Christian community, we could say 17 instead of 20!). So, one year is of great importance in life. And even if from one point of view it might seem artificial to divide time in this way, I think it is more intelligent than artificial to give importance to this division. The Church greatly increases this certainty because, at least in the Western world, by following the rhythms of nature and comparing them with the rhythms of Christian life (of Christian life as history and Christian life as person), in the liturgical year, marking its year with nature’s times, which so closely symbolize and mark the times of personal life and the times of historical existence, the Church carries out a true work of education.
I believe that this moment is really very important. It is important, once we recall it, more for the birth of a new awareness in us, a vigilance, than even for the words that we can hear about it. A few words, though, can help our awareness, but the whole problem lies in our awareness.