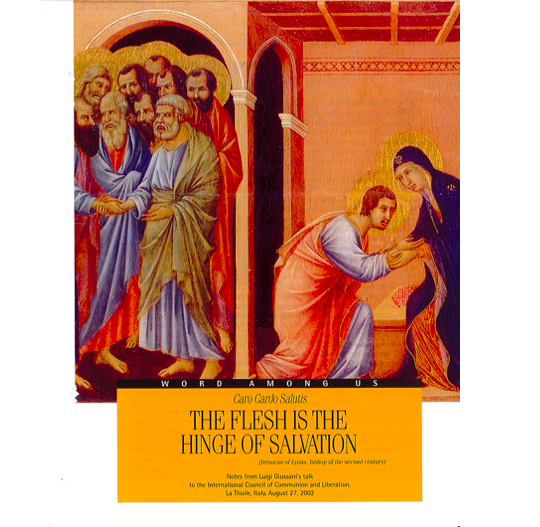 I am very happy that the Lord, in the twilight of these times, has placed me in this spot of light, for what you have reproduced today in our eyes and our hearts is really a spot of light. I would like to manage to say precisely why this is so, and what must enlighten our way of speaking and working.

Is it a question of words? Not in the least! A word becomes the object of discussion when it is proposed, when the impact with this word is the encounter with something that is not that word.

I hope the Lord will grant me too the joy of experiencing daily, more than in the past, what some words mean. But–I say this now as well as I can–listening to you, it seems that the problem for us is one word or another word: words. Thus, we would immediately find a connection with those, even belonging to other religions, for whom a word enters the life of the world and of society, enters the psychological reality of a soul, because it is a word.

Perhaps–rather, without “perhaps”– approaching death is, from this point of view, something that profoundly solicits, that is intensely capable, finally, of changing all the terms of the question.

What is it about? If it is not words, if it is not particular lights, what is it about? It is about an event, as the title of one of our books says (L’avvenimento cristiano) [The Christian Event, Milan, BUR, 1993], one that I would strongly recommend rereading carefully this year.

The event is something totally determined by what it is, and is not the same as anything else; if it is equal to something that already happened, it no longer carries its own weight.

It is almost easier to say it is a “thing.” It is true that this brings us closer to being behind the thing, to feeling its reverberation in the past. But it is a “thing” that has no equal; there is nothing similar to it; it is not born of anything as a possibility of connection that can help us understand it!

It is like when I was a boy, and my late mother read to us, to us brothers and sisters, beginning with me, since I was the eldest of the four. She read us Cuore [Heart]; those names are still vivid in my memory. Dagli Appennini alle Ande [From the Apennines to the Andes], for instance, has become proverbial, not only for me, but for many people, touched a bit by the fringes of a civilization different from that experienced by others. But saying that there was a Hitler, there was a Stalin, saying that there is a Bush, is to say something altogether different from mentioning the existence of a person. A person, what someone is, is a “thing” altogether unparalleled, infinitely, infinitely different and more profound than the way we perceived that “thing” before we discovered it as an event.

Maybe I am not making myself clear, because I did not mean to make a speech to you, but I felt the need to tell you–so that our attitude may never be a “condescension” taken for granted toward what makes us penetrate the heart of the eternal–that it is not a matter of changing our vocabulary, not even of changing the “I.” In the face of what has happened (the event), any comparison with things that have happened to us devalues the question.

I ask you then to give paramount importance, from this very moment, to meditating on what the Lord had me say in Rimini (because my last thought was for what I had to say), and not only as a choice to make the particular content of our life together Dante’s Hymn to the Virgin, which carries and contains the most beautiful verse in all of world literature (and it is not at all necessary that our best readers or–how to say it?–“computers of words,” that is, the journalists, recognize this). I ask you to give top priority this year, as a first step, as a first word on which to rest our feet, in order to go forward, and as an application of what I took the liberty of saying this morning, the words the Lord suggested to me in Rimini, not only and not so much because of the beauty of Dante’s poetry, but because of something somewhat more obscure. Theoretically, we all are ready to say, what matters are these three words, “faith, hope, and charity”–faith, hope and charity! But then, when one, having covered a certain road, is touched within–it is like the hissing of a stone, of a mysterious stone–he understands and says, “faith, hope, and charity.”

In particular, I ask you to stress the aspect of this event which translates, which claims to save with surety, the exceptional nature of what it is, of the relationship with reality, with the Being of whom we are made, in whom we are made to participate: it is the word “hope.”

Faith unveils something that is there. Charity creates a new thing in God’s space, in the space of the eternal. “Hope” is the one word among the three most laden with meaning, the one closest to our habitual use and consumption of things. The word “hope”–even if it passes at a very high speed, like the whoosh of a satellite–is the best suited to making us feel Being: the word “hope” defines Being for us.

Fr Giussani: In any case, I had only meant to greet you, with the admiration and the wonder of one who, on the road, sees another to whom something happens–because he dies, because he lives, because he is born, because he takes the children for a walk on Sunday morning (as my father, my late father did, taking me to attend Solemn Masses, sung by our parish choirs, in one or another Lombard town–I did not go beyond Lombardy).

But I hope that at least the grip of something strange may be rendered interesting for us by our guardian angel. Pardon me if I have taken up your time, but I really wanted to get through to you the importance of the cue I mentioned.

Thank you all! What time is lunch?

Cesana: At one thirty; but now there is a snack.

Cesana: You too, have a good meal, Fr Gius!

Cesana: Yes, when I am back home.

Fr Giussani: The fact, here, is already taking the place of the word!