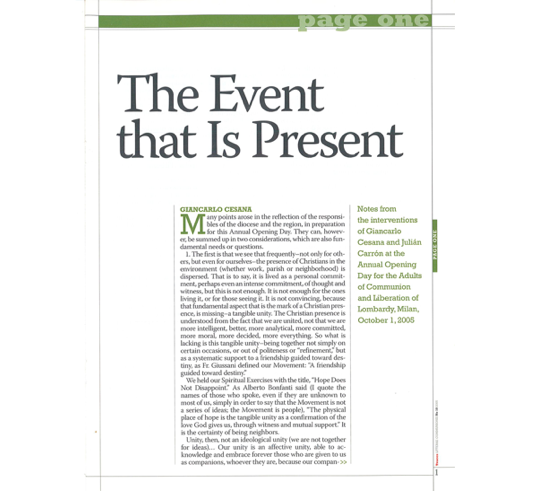 GIANCARLO CESANA
Many points arose in the reflection of the responsibles of the diocese and the region, in preparation for this Annual Opening Day. They can, however, be summed up in two considerations, which are also fundamental needs or questions.
1. The first is that we see that frequently–not only for others, but even for ourselves–the presence of Christians in the environment (whether work, parish or neighborhood) is dispersed. That is to say, it is lived as a personal commitment, perhaps even an intense commitment, of thought and witness, but this is not enough. It is not enough for the ones living it, or for those seeing it. It is not convincing, because that fundamental aspect that is the mark of a Christian presence, is missing–a tangible unity. The Christian presence is understood from the fact that we are united, not that we are more intelligent, better, more analytical, more committed, more moral, more decided, more everything. So what is lacking is this tangible unity–being together not simply on certain occasions, or out of politeness or “refinement,” but as a systematic support to a friendship guided toward destiny, as Fr. Giussani defined our Movement: “A friendship guided toward destiny.”
We held our Spiritual Exercises with the title, “Hope Does Not Disappoint.” As Alberto Bonfanti said (I quote the names of those who spoke, even if they are unknown to most of us, simply in order to say that the Movement is not a series of ideas; the Movement is people), “The physical place of hope is the tangible unity as a confirmation of the love God gives us, through witness and mutual support.” It is the certainty of being neighbors.
Unity, then, not an ideological unity (we are not together for ideas)… Our unity is an affective unity, able to acknowledge and embrace forever those who are given to us as companions, whoever they are, because our companions, the companionship we are given, the friendship we are given is the unforeseen, positive, and vital manifestation of the Mystery of Christ. There is no other way to know Christ.
2. This leads to the second consideration, which I believe is particularly important after Fr. Giussani’s death. It concerns the need that what guides our life, what our life feels as a reference point, as its constitutive factor, be not the application and the mechanical development of a theory or an organization, however intelligent the theory and organization might be, but involvement in an event–that unforeseen event I just spoke of–which cannot be that of a people if it is not first of all personal and familiar; in other words, a daily event, tied up with everyday life. This unforeseen manifests itself in what we feel as the most foreseen thing, the most normal; it is an event that is exceptional precisely because it manifests itself in day-to-day things, which then are surprisingly transfigured, deeply changed. Our daily reality and relationships become fascinating not when they are all of a sudden transformed according to our dreams (this happiness lasts only a moment), but when they are perceived in the depth of their meaning, of their being forever the sign of our life’s salvation. This is the event; this depth within reality is the event, this mysterious depth that changes reality is the event. “Reality is Christ,” as my wife wrote in her diary, quoting St. Paul.
“For those who took part in it,” Richard from Peschiera wrote, “the Meeting was an exercise in watching and listening.” Watching and listening is what we are called to do, first of all, to do in the sense of doing, of working; our life’s work is to learn to watch and listen, if we want the encounter–the encounter with others and with Christ, who is their depth–to be, as Romeo Astori said, immediate, and not mediated by calculations or politics, whether clerical or lay. (In a meeting with university students, Fr. Giussani said, “When you look at your girl, that girl you love, what is she made of, in the end? In the end, what constitutes her, what makes her unique? Christ!”)
As Cardinal Ratzinger said in the introduction to the first volume of the History of Communion and Liberation, “Identity is not produced by discussion [that is, what I am and what you are is not the product of a discussion between us], but is its presupposition and so the truth is not produced by discussion [it precedes discussion, it precedes our efforts], and it is not to be created in discussion, but rather discovered [acknowledged, yes, through our efforts].” Our effort is to find, not to create; our work is to find. This is the only possibility of dialogue even for us. Today’s meeting is an invitation to this work, to the ongoing change we are called to, so as to discover–as it was repeated at the Assembly of the Responsibles of CL this summer, and reported in Traces–that “Something within something”–“reality is Christ.”
Our being here today is an invitation to this work: a work of passion, of dedication and of prayer that our judgment, that is, the way we look at ourselves and the whole of reality, be not a cold definition, but an act of charity that grows in time, because everything grows in time.