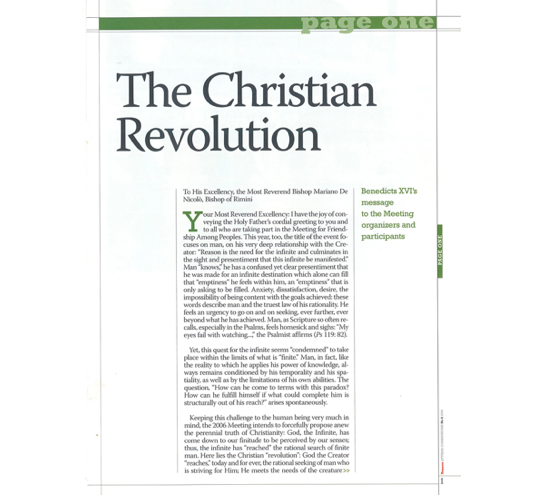 To His Excellency, the Most Reverend Bishop Mariano De Nicolò, Bishop of Rimini

Your Most Reverend Excellency: I have the joy of conveying the Holy Father’s cordial greeting to you and to all who are taking part in the Meeting for Friendship Among Peoples. This year, too, the title of the event focuses on man, on his very deep relationship with the Creator: “Reason is the need for the infinite and culminates in the sight and presentiment that this infinite be manifested.” Man “knows,” he has a confused yet clear presentiment that he was made for an infinite destination which alone can fill that “emptiness” he feels within him, an “emptiness” that is only asking to be filled. Anxiety, dissatisfaction, desire, the impossibility of being content with the goals achieved: these words describe man and the truest law of his rationality. He feels an urgency to go on and on seeking, ever further, ever beyond what he has achieved. Man, as Scripture so often recalls, especially in the Psalms, feels homesick and sighs: “My eyes fail with watching...,” the Psalmist affirms (Ps 119: 82).

Yet, this quest for the infinite seems “condemned” to take place within the limits of what is “finite.” Man, in fact, like the reality to which he applies his power of knowledge, always remains conditioned by his temporality and his spatiality, as well as by the limitations of his own abilities. The question, “How can he come to terms with this paradox? How can he fulfill himself if what could complete him is structurally out of his reach?” arises spontaneously.

Keeping this challenge to the human being very much in mind, the 2006 Meeting intends to forcefully propose anew the perennial truth of Christianity: God, the Infinite, has come down to our finitude to be perceived by our senses; thus, the infinite has “reached” the rational search of finite man. Here lies the Christian “revolution”: God the Creator “reaches,” today and for ever, the rational seeking of man who is striving for Him; He meets the needs of the creature who sighs for Him. Making Himself a man among men, the Only-begotten Son of God declares, “I am the Way, and the Truth, and the Life” (Jn 14: 6). These words are expressed in an invitation that the Church never ceases to address to people of every latitude and culture. This year’s Meeting for Friendship Among Peoples desires to echo them, recalling that the infinite has been “brought within our reach” and that for each person it is possible to know God and quench one’s thirst in Him.

The experience of peace is possible particularly in God, who revealed Himself in Christ. At this deeply distressing moment, the Holy Father’s thoughts go to the Holy Land and to the region of the Middle East, which witnessed the history of salvation that culminated in the Incarnation, Death, and Resurrection of Jesus. Living there today are peoples torn apart by enmity, by the absence of communication and of reconciliation, by violence that tramples upon every right and legitimate expectation of people of good will. The Supreme Pontiff also gladly takes this opportunity to urge everyone to pray to the God of peace to move the hearts of those involved in a conflict that has been going on far too long and has taken a toll of countless victims.

May Mary, Mother of the Prince of Peace, obtain that the peoples living in those regions recognize one another as brothers and sisters and collaborate in building a just and lasting peace. Benedict XVI accompanies his wishes with the assurance of his constant remembrance in prayer, as with affection he imparts his Blessing to you, Your Most Reverend Excellency, and to all those present at this annual event, sponsored by Communion and Liberation. I welcome this opportunity also to formulate my own most cordial wishes for an excellent Meeting, as I am pleased to confirm that I remain,

Yours most devotedly in the Lord,
Cardinal Angelo Sodano
Secretary of State