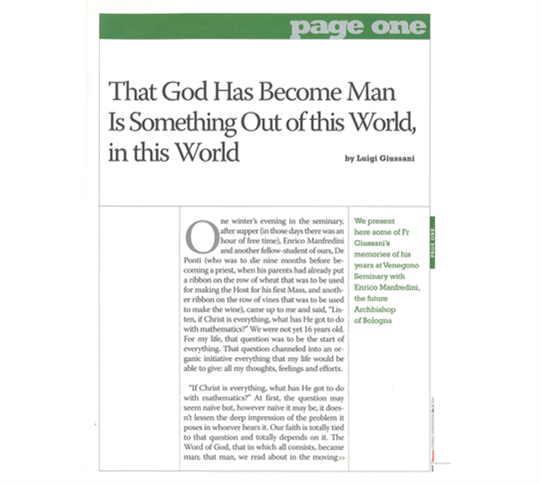 One winter’s evening in the seminary, after supper (in those days there was an hour of free time), Enrico Manfredini and another fellow-student of ours, De Ponti (who was to die nine months before becoming a priest, when his parents had already put a ribbon on the row of wheat that was to be used for making the Host for his first Mass, and another ribbon on the row of vines that was to be used to make the wine), came up to me and said, “Listen, if Christ is everything, what has He got to do with mathematics?” We were not yet 16 years old. For my life, that question was to be the start of everything. That question channeled into an organic initiative everything that my life would be able to give: all my thoughts, feelings and efforts.

“ If Christ is everything, what has He got to do with mathematics?” At first, the question may seem naïve but, however naïve it may be, it doesn’t lessen the deep impression of the problem it poses in whoever hears it. Our faith is totally tied to that question and totally depends on it. The Word of God, that in which all consists, became man; that man, we read about in the moving pages of St John’s Gospel, that man whom Andrew and John followed (“and went to His home and spent the whole time watching Him speak,” and then went home and were changed, were different, so much so that their neighbors asked them, “What’s happened to you?”). This Christ, whom John and Andrew were the first to notice, has got to do with everything. (…)

What I want to stress, though, is that what inspired us was not naivety, but intense, unparalleled interest in the Christian fact. That evening, the Christian fact seemed to blossom for us. What a serious approach to our daily life, to our studies, to our free time, to our discussions did those thoughts come to determine! They created a lasting friendship that accompanies us always. (…)

The content of the discussions amongst the three of us was all dictated by the fervor that that question had aroused. And I can say, quite naively, but before God, that I can see no difference between what we imagined for our future and what actually happened. For example, we would tell each other, “The Church needs to come back to life; Christian reality needs to be more consciously lived (we were only fifteen years old, but the question had been possible because we were already living a deep friendship). In order to come back to life, the Church has to create communities, many communities that, linked to each other, can transform social life and the form of social life, can give a new pattern to society and make man’s journey in this world more human.” These are the very same things that I still try to think over, and for which I try to live: the Church made present by people with whom I can speak seriously about Christ, give form to my life as the verification of this, and create a joyful network of relationships with companions for this. (…)

We have to admit it: if God has become man… I remember once on the staircase of the seminary, while we were going down to chapel in silence, Manfredini said to me, “Just think! God became a man like us…” He stopped short, and the phrase struck me: “That God became a man like us is something out of this world!” And I added, “It is something out of this world that lives in this world!” And, as a result, this world becomes different, more bearable; it becomes more beautiful. What followed immediately from passion for Christ, as it were, burning up the ground on which it flowered, was passion for men, passion for their destiny, passion for the meaning of life that men don’t know and don’t think about. He went on, not in tears, but almost: “Who knows what will become of these youngsters who come to the parish youth centers, and the people who go to Church, if they don’t grasp that what they worship, what they pray to, what they think about, is the meaning of what they are living, of the day they open their eyes to every morning! If they don’t think of this, what kind of life do they lead? How can they live when objections arise, or when the alternative to the thirst for happiness and pleasure asserts itself? How can they live?”

These passages are from Fr Giussani’s address on the occasion of the tenth anniversary of the death of Enrico Manfredini, the late Archbishop of Bologna, on, December 16th 1993, in the Aula Magna of Santa Lucia, Bologna University. The entire text of the talk was published as the foreword to Enrico Manfredini’s book, La conoscenza di Gesù [Knowledge of Jesus] (Marietti).