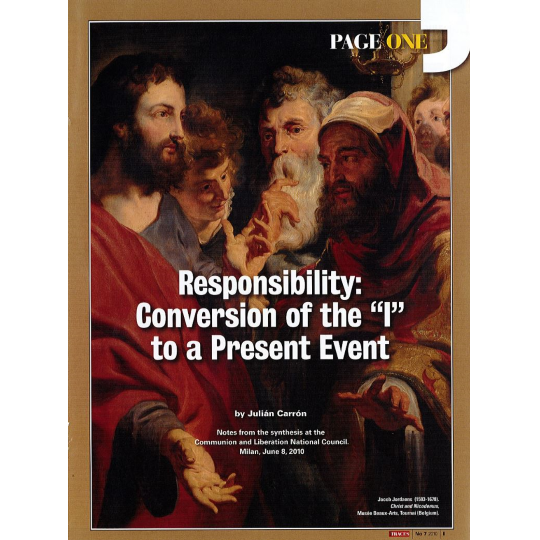 How can each of us see how we have experienced this?

1.Facts have an inevitability of their own, says Fr. Giussani. We have seen this in recent times: if we propose going to Rome to the Pope, each of us has to deal with the fact of going or not going. Facts have an inevitability of their own, putting us up against the wall and leaving us no opportunity to not decide. You can think of this as a misfortune or–as it truly is–as the great tenderness the Mystery has with us, calling us so powerfully as to leave us no alibis, with our freedom intact. We have had plenty of facts in these recent times. I’ll give a quick list: the elections, the issue of pedophilia in the newspapers, the Fraternity Exercises, Rome, and the School of Community. They are all facts that each of us has had to measure up against, beyond intentions. How did we experience them? How did we place ourselves? This is not first of all for a reproof, but for clarity for those who want to walk with clarity toward destiny. The decisive question is whether we are walking or not, because as long as ambiguity remains, we are not helping each other. The fact that the Movement or life challenges us (because very often we do not determine reality, as the newspapers would claim), calls us to a response. And each of us can see within–because this is the true examination of conscience–whether he or she has taken into consideration the facts or has remained indifferent.
We have lived these facts in the face of a proposal. We could have experienced the elections like other times, but this time we said that the elections are an occasion for verifying the faith. Did we take into consideration the proposal even minimally? We said that we do not go to Rome to support the Pope, but to be supported by him. How did each of us engage with these reasons? We participated in the Fraternity Exercises. How? School of Community was proposed. What was our attitude to this? How did we live our responsibility? Did we facilitate access to the School of Community for everyone or did we block its reaching everyone who wanted it? It was proposed in this way, as a free proposal, but to everyone. Did each of us interpret this proposal according to his own criteria (like the elections or Rome)? This is the inevitability of the facts, which unmasks our possible ambiguity. The facts are a challenge for the “I,” before which you cannot cheat. Did we interpret them as a sign that pointed to something beyond, or were they just an occasion for games of interpretation?

2. Since we all experienced it, in one way or another, we can verify what happened, can look at our own life and see what happened, whatever the decision. Did a rebirth of the “I” happen? This is the verification of the Christian event. That is, at the end of this year, how do I find myself? What journey have I made? What experience of rebirth have I had? Or has this year passed in vain? We can see without a shadow of a doubt in ourselves, notwithstanding all the chatter (excuse the word), the facts, the facts of rebirth that we see in many people. As responsibles, do we participate in this or not?

3. The truly shocking charity of the Mystery with each of us is given (and not to be taken for granted) in a historical presence. The charism is a historical presence that enables victory over confusion. But in order for it to vanquish confusion, you have to let yourself be generated, and this way you can see the advantage of faith for life. “To let yourself be generated” means that my “I” is reawakened in a relationship, a relationship with this historical presence–today it can be in one point and tomorrow in another, but this is the modality with which the Mystery truly acts in a mysterious way. We all are tempted to empty this impact, and then the alternative to letting ourselves be generated is letting the resistances win. But when you let yourself be generated, the thing that enables this generation imposes itself before your eyes. A presence you run into has such power to grasp that it generates us and evokes a surge of joy, which is the victory over the division between knowing and believing, because it appears increasingly more clear that the Christian truth is an event that happens in the subject, and we are the first to be amazed by its happening. It is mysterious, but so real that all our life is determined by this event. Therefore, it is the happening of a new creature, which is not the fruit of any attempts of ours, but truly a grace. Where do you see this?

4. The event sets us into motion, provokes the entire “I,” in its reason and in its freedom, grabs it and moves it, incites it, and for this reason goes to the point of judgment. It is not something that remains purely aesthetic or pious, but sets into motion all the ability of reason to enter into the question of the elections or pedophilia or work or any other aspect of reality. This is what enables us to say a different word, because only an “I” moved by this event enters into things and judges them. Where ambiguity remains, this work is missing. The Pope’s sentence I have quoted almost every day since hearing it goes like this: “[T]he contribution of Christians can be effective only if knowledge of faith becomes knowledge of reality” (Benedict XVI, “Address to the 24th Plenary Session of the Pontifical Council for the Laity,” May 21, 2010). In order for knowledge of faith to become knowledge of reality (which is not automatic), the event of faith must reawaken the entire intelligence to enter into reality and so, with this intelligence thrown wide open (broadened, the Pope would say), I can better understand reality, give a more adequate judgment, enter into things.

Without this, our contribution cannot be decisive, because we will repeat everyone else’s with more shrewdness or more intense obstinacy, but it will not be different and therefore will not be decisive. And this, my friends, tells us that in order for knowledge of faith to become knowledge of reality, education is needed: this is what Fr. Giussani testified to us and what the Fraternity Exercises re-proposed following Fr. Giussani, because the Exercises are the response to the division between knowing and believing, between the knowledge of faith and the knowledge of reality (to express it with another formula), that we cannot overcome unless the Christian event continues to happen and unless we are willing to follow it to the point of judgment of the particular. This is what makes the subject become a presence, because of the newness it brings–not because of a correct discourse, but because of the newness it brings in looking at the reality of everyone.

Without this, the hard core of our mentality remains the same and the new creature does not emerge anywhere, because a subject cannot remain a true subject before reality unless he or she enters into the particulars and his or her cultural position becomes public–otherwise, Christianity is a devotion. This means that if we want to give a contribution, beyond our intentions, we must ask ourselves if we are open to this conversion we spoke of in the beginning and to which the Pope is calling us in every way possible. In this critical juncture of Church history, her maximum authority calls us to this conversion.We could reduce it moralistically if the charism did not help us truly understand its real importance, which is the original New Testament one: the change of mentality, the metanoia, the change of the nous.

Friends, this is the gripping adventure in which we are immersed, and precisely because of all the facts that have challenged us, this year has given us the opportunity to uncover many ambiguities and therefore to see how the Mystery has mercy on us. You can perceive the revelation of all these things as a misfortune, or you can consider it a grace, as the Pope says: conversion is a grace, because it is peace. To the degree to which each of us takes this challenge seriously, we can also help our friends in each community–at the end of the year, during the summer holidays–to form a judgment. We can put them in the condition, give them all the instruments for a judgment, for looking at what happened, for taking a step in awareness that first of all interests us and our communities, and that is the only chance of being decisive for the world.