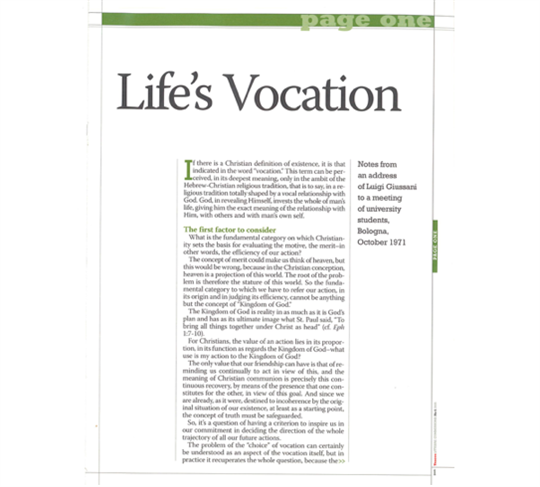 If there is a Christian definition of existence, it is that indicated in the word “vocation.” This term can be perceived, in its deepest meaning, only in the ambit of the Hebrew-Christian religious tradition, that is to say, in a religious tradition totally shaped by a vocal relationship with God. God, in revealing Himself, invests the whole of man’s life, giving him the exact meaning of the relationship with Him, with others and with man’s own self.

The first factor to consider
What is the fundamental category on which Christianity sets the basis for evaluating the motive, the merit–in other words, the efficiency of our action?
The concept of merit could make us think of heaven, but this would be wrong, because in the Christian conception, heaven is a projection of this world. The root of the problem is therefore the stature of this world. So the fundamental category to which we have to refer our action, in its origin and in judging its efficiency, cannot be anything but the concept of “Kingdom of God.”
The Kingdom of God is reality in as much as it is God’s plan and has as its ultimate image what St. Paul said, “To bring all things together under Christ as head” (cf. Eph 1:7-10).
For Christians, the value of an action lies in its proportion, in its function as regards the Kingdom of God–what use is my action to the Kingdom of God?
The only value that our friendship can have is that of reminding us continually to act in view of this, and the meaning of Christian communion is precisely this continuous recovery, by means of the presence that one constitutes for the other, in view of this goal. And since we are already, as it were, destined to incoherence by the original situation of our existence, at least as a starting point, the concept of truth must be safeguarded.
So, it’s a question of having a criterion to inspire us in our commitment in deciding the direction of the whole trajectory of all our future actions.
The problem of the “choice” of vocation can certainly be understood as an aspect of the vocation itself, but in practice it recuperates the whole question, because the problem remains even in someone who is thirty years old and already married.
So the criterion for the choice of vocation cannot be anything else but how I, with all I am, spiritually or intellectually, with my temperament, my upbringing, and my physical condition, can be most useful for the Kingdom of God.
At this point, there is a question we could usefully ask. Who has ever been told, even once, when speaking of what he should do in life–the criterion with which to choose his life’s companion (man or woman); the criterion for the choice of studies, job or profession; whether to stay at home or to go abroad; to do this or that–that the ultimate criterion to keep in mind is the relationship between himself and the Kingdom of God–in other words, the presence of good in the world, of the Christian good in the world, the good of the Church or the good of the Christian community? So no wonder such a proposal creates difficulty, or ends up being felt as abstract. (Although the fact that a proposal is felt as abstract doesn’t mean that it is to be discarded; it could mean that our life needs conversion!)
We all know by now, at least as an initial experience, that Christian life has such a logic, such a deeply organic logic, that to chop it up so as to live it in pieces is impossible. If a person is alive, then you can run alongside him, but if you chop him into pieces and carry one of the pieces, then you find it heavy! So, in a friendship like ours, in dealing with such a capital problem as that of vocation, life as vocation, it wouldn’t be right not to put the word “Christian” decisively at the beginning.
To tackle this problem means to tackle the question of happiness, which is to say, the quantity and quality of taste and intensity of life in this world, because if all things are directed and in function of the mystery of the Kingdom of God, then they are lived and realized in so far as they are aimed at their goal. So the problem is that of our self-realization.

B) Vocation as a choice of profession
The criterion proposed at the beginning is valid for the second level of choice, that of a particular profession. Very often, for this, too, the great criteria for a decision are only personal profit and desire. These should form part of the question, but not everything.
In the choice of a job or a profession, one should keep in mind the third category we mentioned, the needs of society. For the Christian, however, these cannot be a criterion isolated from a deeper concept, the needs of the Christian community, because the needs of society are nothing else but an aspect of the needs of the Christian community, the needs of the Church in every era.
What kind of Christian community are we living if this great question of the decision of the road that will define the practical shape of our person for the whole of life, or for the greater part of it, is made individualistically? Does our communion not reach the point of questioning our choice of profession or job?
This criterion must at least give us some inspiration! And this means that the choice of profession or job must be discussed, as far as possible.
What does being open to God mean, if not this readiness, this availability for vocation?
To conclude, we had as well remember that vocation is not mathematics, something that comes into your head. It is always a possibility, and it must be a concrete possibility for me, just as I am; for that matter, on a day-to-day level, we have to answer the problem of vocation as a request for new action, hour by hour, by looking at the concrete possibilities.