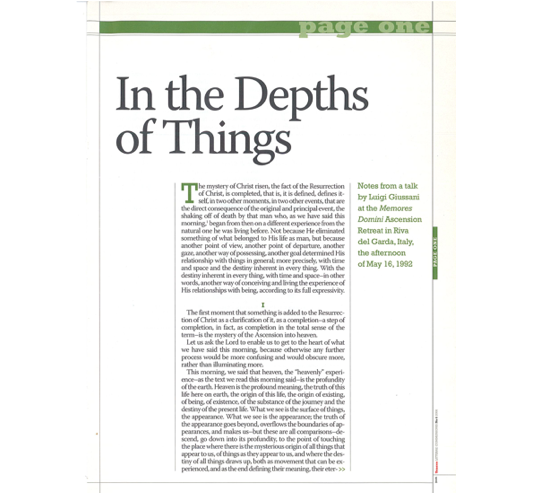 The mystery of Christ risen, the fact of the Resurrection of Christ, is completed, that is, it is defined, defines itself, in two other moments, in two other events, that are the direct consequence of the original and principal event, the shaking off of death by that man who, as we have said this morning,1 began from then on a different experience from the natural one he was living before. Not because He eliminated something of what belonged to His life as man, but because another point of view, another point of departure, another gaze, another way of possessing, another goal determined His relationship with things in general; more precisely, with time and space and the destiny inherent in every thing. With the destiny inherent in every thing, with time and space–in other words, another way of conceiving and living the experience of His relationships with being, according to its full expressivity.

IV
Let’s recall the things that are most necessary so that this life in the house may be an accomplice to our destiny, so that in it everything becomes an accomplice for our destiny.
A seventeen-year-old young man wrote me, “I want to live this life heart and soul; I want to go to the heart of the matter in every thing I do. I want to know the reasons. This week, we didn’t even have School of Community, which for me is the only point of comparison, because it’s not enough for me to do [the rule in the organizational meaning of the term is not enough for me: at home I am impeccable, but my heart is light years away, even though this doing is nice, because it leaves an order, creates an order, serves for an order]; this doing is not enough for me.” The consciousness of the motives, the consciousness of the values, the consciousness of the truth involved: this is the first condition for living a house, so the house can be the place where nothing is against us, not even ourselves. The consciousness of motives, reasons, the realization of the truth of my life there… “Otherwise, if I don’t realize this, it’s better if I go. Maybe another situation…” No. I tell you, another situation would not enable you to understand; another situation would make you flee.
We have to be careful–as I also warned the older ones of the Fraternity–of three great obstacles to developing this consciousness of the truth in the house, and to edifying each other in charity. Charity among us, this complicity that becomes help for walking toward destiny, can be impeded above all by three things, three attitudes.
The first I call neglect of the “I.” The neglect of the “I,” the “I” by which when you say “you,” you say “my,” because you don’t say anything seriously if not saying “this is in relationship to my destiny, and thus it is “mine.” “Man cannot expel from his consciousness the word ‘mine’”–because his destiny is linked to it–when you say “you” to a person or a thing, analogously you say “my”: it is a relationship with destiny. Neglect of the “I” is the same as neglect for the thought of your destiny, then the other, the “you” given to the other or given to the thing, either makes you a slave of it, superficial with it, or it pushes you to be the master of it. “Man cannot expel from his consciousness the word ‘mine.’ This is the word that erases solitude [while neglect of the “I” lets solitude invade our lives].” These are the words of John Paul II, in his Rays of Paternity.24
The second obstacle is the affirmation of the “I,” the ruthless affirmation of your own individuality, the self-centered affirmation of yourself. A psychologist wrote, “Those who are centered on their own consciousness, on themselves, on their own goodness or intelligence, on their anxiety or persuasion of being right, end up no longer perceiving reality in its complexity [that is, in its truth: all the factors in play], in its inexhaustible alterity [in its inexhaustible alterity, because there is a vanishing point in the reality in which God has placed you, the vanishing point that is the relationship with Himself: at least this escapes you]. Thus, the only enthusiasm they can experience in life is that of being right or doing what they want; certainly not surprise at what happens, at reality that speaks to the person [because of the emergence of a newness that provokes you]. Saint Thomas Aquinas explained it lucidly in his Summa Theologica where he said that ‘the proud, while they delight in their own excellence [that is, being right or feeling right] are annoyed by the excellence of the truth.’ The greatest sign is unease, rage, and at least extraneousness, before authority”.
The third obstacle to everything in the house being an accomplice for our destiny is described by Péguy in these pages: “Honest people [those who indeed do not act like others; but ‘I don’t act like the others’ is the way the Pharisee spoke] do not present that opening produced by a hideous wound [they are closed], by an unforgettable misery, by an invincible regret, by suture point eternally ill bound, by a mortal restlessness, by an invisible and hidden anxiousness, by a secret bitterness, by a perpetually disguised fall, by a scar that is eternally unhealed. They do not present [that is] that openness to grace that is essentially sin… Morality [our justice] makes us owners of our poor virtues. Grace gives us a family and a race [a family is a companionship]. Grace makes us children of God and brothers of Jesus Christ [in the vocation that is given us].”25