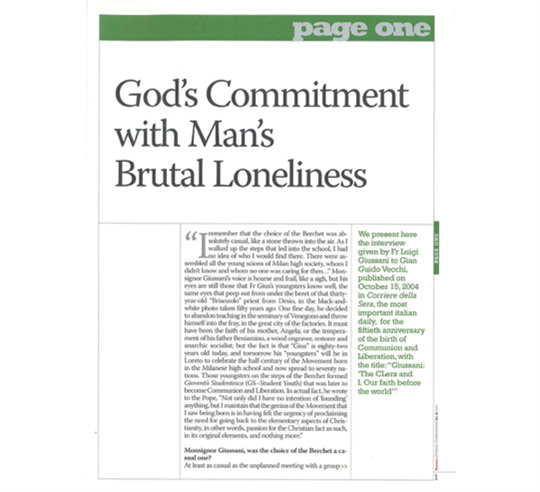 “I remember that the choice of the Berchet was absolutely casual, like a stone thrown into the air. As I walked up the steps that led into the school, I had no idea of who I would find there. There were assembled all the young scions of Milan high society, whom I didn’t know and whom no one was caring for then…” Monsignor Giussani’s voice is hoarse and frail, like a sigh, but his eyes are still those that Fr Gius’s youngsters know well, the same eyes that peep out from under the beret of that thirty-year-old “Brianzolo” priest from Desio, in the black-and-white photo taken fifty years ago. One fine day, he decided to abandon teaching in the seminary of Venegono and throw himself into the fray, in the great city of the factories. It must have been the faith of his mother, Angela; or the temperament of his father Beniamino, a wood engraver, restorer and anarchic socialist; but the fact is that “Gius” is eighty-two years old today, and tomorrow his “youngsters” will be in Loreto to celebrate the half-century of the Movement born in the Milanese high school and now spread to seventy nations. Those youngsters on the steps of the Berchet formed Gioventù Studentesca (GS–Student Youth) that was later to become Communion and Liberation. In actual fact, he wrote to the Pope, “Not only did I have no intention of ‘founding’ anything, but I maintain that the genius of the Movement that I saw being born is in having felt the urgency of proclaiming the need for going back to the elementary aspects of Christianity, in other words, passion for the Christian fact as such, in its original elements, and nothing more.”

Monsignor Giussani, was the choice of the Berchet a casual one?
At least as casual as the unplanned meeting with a group of youngsters, some time before, on a train going to Rimini. As I spoke with them, I found them deeply ignorant of what Christianity is. So that meeting provoked me to ask my superiors to let me leave teaching in the seminary so as to teach in a high school. I was assigned to teach religion in the Berchet High School in Milan.

And how did you go about it, from that first day in Class IE?
The ultimate criterion I adopted in class was to arouse new fervor in those youngsters by trying to communicate the faith of a people I belonged to. This is what I told myself as I went for that first day of school. In the students, I immediately noted a sincere and, especially in some of them, an agitated interest.

Agitated?
Yes. As they listened to me talking during the lesson, some of the students appeared surprised by the fact that religion could acquire a surprising vivacity before the questions about the exhaustive meaning of existence, normally ignored by a precarious, albeit sincere, point of view, as theirs was in that moment. I would ask Our Lady to give me the grace to be able to show those kids how religiosity reaches man at a depth of human experience that we cannot imagine.

And did you meet with diffidence?
I still remember, as if it were yesterday, the first explosion of scorn and spite that a surprise question brought to the surface. In fact, it was an objection that a boy at the back had made his own, saying, “Faith and reason are two profoundly different fields, existentially hostile.” He spoke of lines on different parallel planes that could never meet…

How do you answer questions of this kind?
My point of departure was a way of looking at things as a “passion for,” as “love,” an open attitude that doesn’t let you start off alone and generates a relationship. It is impossible to tackle a situation that has to do with life without this context causing bewilderment, a surprise. When this astonishment happens, then enthusiasm in speaking to the youngsters becomes logical; all the commitment will be subordinated to the work of intelligence, for it would be a mistake to follow someone without a reason– in the human brain there is a linchpin that demands the explanation of the reason. In other words, without the surprise of reality as a launching point, man would remain more or less bogged down by the mere need to do things–but to do what? And he would feel anything he attempts to be useless.

Yet it is said that Europe is more and more secularized. How can we talk of faith today?
Firstly, we have to correct the usual conception of faith. The whole new beginning of a Christian experience–and therefore of every relationship–is not generated by a cultural point of view, as if it were a discourse to be applied to things, but it happens precisely as an experience. It is an act of life that sets everything in motion. The beginning of faith is not an abstract culture but something that precedes this: an event. Faith is taking note of something that has happened and continues to happen, of something new from which everything starts off, really. It is a life and not a discourse about life, because Christ has begun to “leap” in the womb of a woman!

Is this what it is not possible to transmit?
Yes, it’s this perception of Christianity and the Church as life that has been lost in recent centuries, and with it we have lost the possibility of the beginning of an answer to the questions of the youth. If the beginning is missing, there is no tackling the problem posed by man’s nature: the need for an answer to the demands of his reason. So, to speak of faith to the youth, but even to adults, is to speak of an experience and not to repeat a discourse on religion, however correct it might be.

Is there a sort of mutual diffidence between lay and religious culture?
There is no diffidence on our side, but the well-founded awareness of a very problematic situation that finds its expression in a poem by Carducci, Su Monte Mario: “…until gathered below the equator, pursuing the calls of the fleeting heat, the exhausted offspring have only one woman, one man who, standing erect and bruised amidst of ruins of the mountains, among the dead forests, with glassy eyes will watch you, sun, go down over the immense expanse of ice.”

A desolate image…
These words mark the end of man. It is an attitude caused by a negativity in the conception of what man is and by an incomplete development of his sensitivity and intelligence.

Do you see, as some people claim, a tendency hostile to Catholicism in Europe?
Today, man is living a sort of existential dyspepsia, an alteration of his elementary functions, which divides him, like the man-woman relationship described by Carducci: when they don’t consider themselves together at the origin, they are divided, two separate entities that will never meet, not even at the end. It could seem easy, for example, to consider the product of a page of art only as the outcome of one’s own capacity. The same happens with work, the same with love for a woman. This is a widespread fact.

And instead?
What makes man’s perception change is the incumbent dependence that must be attributed to everything before embarking on any enterprise: “Sweetest, mighty/ Dominator of the depth of my mind,” Leopardi sang. Thus, to the brutal loneliness to which man calls himself, as if to save himself from an earthquake, Christianity is offered as an answer. The Christian finds a positive answer in the fact that God has become man; this is the event that surprises and comforts what would otherwise be a misfortune. It’s inconceivable for God to act toward man unless as a “generous challenge” to his freedom. The modern objection that Christianity and the Church reduce man’s freedom is nullified by the adventure of God’s relationship with man. Whereas, thanks to a limited idea of freedom, it is inconceivable for man today that God should commit Himself in a straitening relationship with man, as if denying Himself. This is the tragedy: man seems more concerned to affirm his own freedom than to acknowledge this magnanimity on God’s part, that alone fixes the measure of man’s participation in reality and thus really frees him.