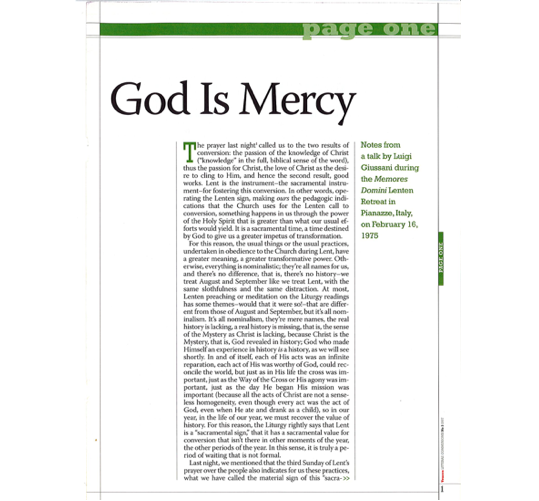 The prayer last night1 called us to the two results of conversion: the passion of the knowledge of Christ (“knowledge” in the full, biblical sense of the word), thus the passion for Christ, the love of Christ as the desire to cling to Him, and hence the second result, good works. Lent is the instrument–the sacramental instrument–for fostering this conversion. In other words, operating the Lenten sign, making ours the pedagogic indications that the Church uses for the Lenten call to conversion, something happens in us through the power of the Holy Spirit that is greater than what our usual efforts would yield. It is a sacramental time, a time destined by God to give us a greater impetus of transformation.
For this reason, the usual things or the usual practices, undertaken in obedience to the Church during Lent, have a greater meaning, a greater transformative power. Otherwise, everything is nominalistic; they’re all names for us, and there’s no difference, that is, there’s no history–we treat August and September like we treat Lent, with the same slothfulness and the same distraction. At most, Lenten preaching or meditation on the Liturgy readings has some themes–would that it were so!–that are different from those of August and September, but it’s all nominalism. It’s all nominalism, they’re mere names, the real history is lacking, a real history is missing, that is, the sense of the Mystery as Christ is lacking, because Christ is the Mystery, that is, God revealed in history; God who made Himself an experience in history is a history, as we will see shortly. In and of itself, each of His acts was an infinite reparation, each act of His was worthy of God, could reconcile the world, but just as in His life the cross was important, just as the Way of the Cross or His agony was important, just as the day He began His mission was important (because all the acts of Christ are not a senseless homogeneity, even though every act was the act of God, even when He ate and drank as a child), so in our year, in the life of our year, we must recover the value of history. For this reason, the Liturgy rightly says that Lent is a “sacramental sign,” that it has a sacramental value for conversion that isn’t there in other moments of the year, the other periods of the year. In this sense, it is truly a period of waiting that is not formal.
Last night, we mentioned that the third Sunday of Lent’s prayer over the people also indicates for us these practices, what we have called the material sign of this “sacrament” that is Lent. What is this material sign, as the bread and wine are for the Eucharist, as water is for Baptism? “Merciful God, source of all good things,” You have shown us that prayer, fasting, and works of brotherly love are remedies for sin. Look upon us who acknowledge our misery and, as we are oppressed by the weight of our offences, may Your unfailing mercy raise us up.2 We would, in fact, be overshadowed by restless irritation with ourselves, by uneasiness with ourselves, by dissatisfaction with ourselves–may Your mercy raise us up, may Your merciful presence, the fact that we look to You, give us comfort and relief. Therefore, we must call ourselves, call our life, to the truth of those three points, to the use of those three points. Lent must be an obedience to this invitation of the Church: prayer, fasting, and works of brotherly love.

1. Prayer
First of all, in this period we must respond to the invitation to recover more deeply the sense of prayer. There is only one meaning of Christian prayer: waiting for Christ. As we said in School of Community,3 the Prophet made the people present to God. What did the Prophet ask God for the people? He asked for God. In the same way, for the portion of the people that we have closest to us, which we ourselves are, we can do nothing other than ask God for the manifestation of God, the expectation of the “blessed hope,” the return of Christ, or, the same thing, the fulfillment of His Resurrection, because the final manifestation has already begun with the Resurrection of Christ. Having been seized into the “new and eternal covenant” through Baptism means that this end is already present in us. This is the exalting thought, the thought of freedom; this is liberation. So then, the only true desire is that this manifestation be complete or, in other words, that what we already have upon us be completed: Christ Risen. And this, looking at time with man’s normal eyes, normal gaze, is the same as “the waiting for His return.”
Christian prayer is the waiting for His return, the entreaty for His return, the maranatha, “Come, Lord Jesus,” that concludes the Book of Revelation.4 Whatever prayer of ours, whatever entreaty, however we may gaze at God, whatever reflection of ours, if it is not based on this “Come, Lord Jesus!” then it is not prayer, or else it is still pagan prayer. This is the essence of Christian prayer. Take note, please, that all this can be said in another version that we’ve always used: prayer is the memory of Christ, the memory of the Resurrection. It is the memory of the Resurrection because our existential situation coincides with the entreaty that this Resurrection happen in us, that it be fulfilled in us and in the world. It’s the same. Therefore, it’s not memory of Christ if it’s not a waiting for His return. It’s identical. If a man were in love, the memory of his beloved would coincide with the desire to see her again.
Let us remember this essential aspect of prayer precisely in view of our Lenten conversion, of our going deeper as a way of Lenten conversion, particularly in two important implications.

2. Fasting
The second theme, the second indication given in the Liturgy prayer as a factor of the sign of Lent, or the physical and visible reality contained in the sacramental action, is the word “fasting.” They couldn’t use the word “sacrifice” because its connotations are too precisely religious and referential to cult. For us, “sacrifice” is more generic, so we can use it instead of “fasting” or “mortification” precisely in the narrow sense of the term. We’re talking about the narrow meaning of the word: making sacrifices or choosing gestures of mortification, or fasting. This immediately means temperance in one’s drives or instincts, temperance in the use of instinct. Temperare in Latin means governing according to the purpose, toward the purpose, therefore, keeping in order. Order is the relationship of the thing to its goal, as both direction and time. To temper, to govern the thing according to its goal, is thus keeping the thing in the dynamic order toward its purpose.
So then, we can translate the invitation to sacrifice, the invitation to mortification and fasting, as faithfulness to what’s “most meaningful” in the thing. In the thing we have to temper, in the thing we have to mortify and sacrifice, the norm is faithfulness to what is meaningful, to the meaning of the thing. Sacrifice is faithfulness to what’s “the most meaningful.” In fact, there is an immediate meaning of the thing: someone is hungry and he falls greedily on his food. He feels affection and, zoom, he hitches up. There’s also a third field, we’ll mention out of love for thoroughness, which is vainglory, pride, or, better, the urge for possession, but for economic-political possession. Saint John indicates it in his first letter: “Concupiscentia carnis, concupiscentia oculorum, superbia vitae.”15 A voraciousness in instincts, a non-temperance of instincts.
But I’d like us to dwell more on the definition of sacrifice as faithfulness to what is most meaningful in the thing. In eating and drinking, what’s most meaningful is that they are instruments for our journey, not gorging or feeling your whole palate react sweetly and vibrantly upon contact with the molecules of your wine. Therefore, I call us to this mortification as the concrete expression of the search for what’s most meaningful in eating and drinking as well. In fact, the word “fast” in liturgical history, immediately meant this (for those, instead, who refuse to eat enough, the opposite is the most meaningful).
But, most of all, we have to focus our attention on affectivity (the third thing, the voracious affirmation of self, could be recovered in the other liturgical indication that speaks of brotherly love): it’s precisely in affectivity that this sacrifice, this mortification, as faithfulness to the most meaningful, must act, and must act keeping sharply on the lookout, must act non-stop, without falling asleep, without parentheses of forgetfulness. Faithfulness to what’s most meaningful… in affection, what’s most meaningful is not adhering to the immediate reverberation that affection has (at whatever level and color, whatever name it can have). For this reason, there’s a harmony, an understanding, that, expressed in a certain way, divides, and there’s a tension that, if not tempered, alters, makes you go off the road. In any case, it’s enough that you reflect on the formula “faithfulness to what’s most meaningful.”
Anyway, the word mortification shouldn’t frighten us, because death is already in that separation by which, even in the greatest intimacy, one can never truly identify with the other. What truly lets us identify with the other is precisely the search for what’s most meaningful; it’s the faithfulness to what’s most meaningful, because total identification is “in Christ,”16 as Saint Paul said. His formula–“in Christ;” “do everything in Christ;” “the world in Christ”–indicates the profound and final unity of everything, as what we are destined for. And if we always say that liberation is unity and slavery is division, then we must feel this call not as an enemy but as a friend.
There is a reverberation of this “faithfulness to what’s most meaningful”–that must operate attitudes of real mortification, must establish components of real mortification–there’s a test, a result: freedom, freedom in the thing. This is precisely a test. And from this, one physically perceives the faithfulness to what’s most important. This is what mortification brings about, exalts, and builds: freedom–freedom from the result, so that one finally is able to love the other, free from the response of the other, from the other’s way of corresponding. It’s truly freedom, truly love, and that’s that. Love finally without deceit. And, secondly, freedom from oneself, that is, from gusto. Freedom from the result, from the other, and freedom from gusto (also from the mountain, for example, from the snow, the rocks, and the glacier; otherwise, if you don’t go there for what’s most meaningful, the trip becomes just another Alpine Club activity).