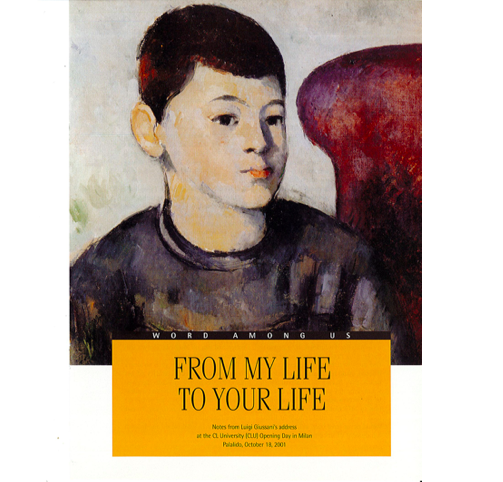 My greeting echoes in these circumstances, after 50 years of proposal and commitment to which the unity of your friends and “ancestors” of that time has been called.

But, between the two lines of connection (past and present), the ancestor is much the lesser, he is like the passing glance that a boy casts on his girlfriend as she walks by. The connection between man and, I won’t say another man, but reality in all its twists and bends, in all the circumstances it presents, is much more than an ancestor!
Therefore, I have dared to give you this greeting, because it is generated by our historical connections. But it is generated first of all because it was the gaze I turned on you when you were not yet born; it was already a gaze full of passion for what you would become, for what you would have to face. And indeed, the relationships between us–between persons, and between us and things–all relationships are mediated by a capacity for fascination, by a capacity for burning need, the need to be satisfied, satis facti. I did not believe that this reached, could reach such an initiative of hearts, that, having taken a position of warm sympathy toward my life, it would be so much in agreement with my intention of affectionately intense gaze on their lives. From my life to your life. I would never have been able to suppress a judgment of uncertainty, a judgment uncertain at least about this capacity of yours, if I had not heard today the best friend you have, Fr Pino, who assumes for you a frankness, a clarity, a univocality of thrust and comprehension. In a word, listening to Fr Pino talk to you today, it seemed to me that I was in a university classroom just as I was then!

“Lord, we are called by Your name.”1
We are called by His name! Our name, the one that came out of the flesh and blood of our father and our mother, our name would have no story, it would have no possible history, if it were not something that is born and rises from an inheritance. From an inheritance, yes, but that must be put into play minute by minute within the alternative which is the possibility of evil, because God made everything with wisdom (says the Book of Wisdom, in the Bible), but men do evil.2

In any case, I want to thank you for having acknowledged me as a part of yourselves, as the name. But the name, once a man has uttered it, cannot be forgotten and can no longer be thrown into the ravine of nothingness!
The cynicism one needs so as no longer to safeguard the inevitability of his humanity, this aimless cynicism cannot be ours. Let’s avoid just this! It is an aimless cynicism that they put as a bar across the door to our day–that is to say, to our intense “calculation” of humanity–across the humanity in what we do and in what we live together.
For fifty years, I have been seeing again and hearing again the answers to questions and “lamentations,” because for fifty years I have been seeing and receiving persons who reasoned on the level of these grand “theorems,” calling into play only their pure freedom–pure freedom! Try every day to have this pure freedom correspond to your understandings, your criteria, your action, and this will make you overflow with peace.

“We are called by Your name”! Awaken us, O Father, in the abundance of Your love. Because You are the only point where the expectation that structurally governs all our desires finds an answer, You are the only point where our being can be saved from shipwreck. Try reading Giosuè Carducci’s beautiful poem, On Monte Mario.3 But it is beautiful only for that fascinating vision (at the end of the poem) when the last man and the last woman, on the globe that has become a total block of ice (according to the theses of some categories of scholars), stand at the outer limit of the human gaze and heart. At the limit of this gaze, from the middle of the earth’s horizon, this man and this woman, the last two beings left alive, look amazed (“with glassy eyes”) at the impossibility of living the life with which they had always deluded themselves, faced with the shipwreck of everything on the great horizon of squalor of the Earth full of blood-freezing desert.

I beg you to limit your reasoning, the intensity of some fears of yours, and I beg you to face them in accordance with this vision, whose finale is disastrous, nullifying, where the affirmation of being becomes a new affirmation of nothingness, so that out of this–which it is always possible to commit, as generated by sin–you may draw forth a starting point for your faithfulness to the faithfulness of God, because in Him there is never infidelity! In Being there is never, there can never be unfaithfulness to being!

No matter what, I beg you to be always, throughout your day, pointed toward prayer, toward the outpost of the entreaty. The entreaty is the outpost of the man who goes to battle; the entreaty is a cry, it is a cry that must not neglect its self-awareness, the self-awareness for which it vibrates and was born. So that, I don’t know, fifty years from now, five hundred years from now, we may all meet again in the consolation that Being brings to those who do not leave Him out, in the affirmation of nothingness, of their intense match.
Thank you.