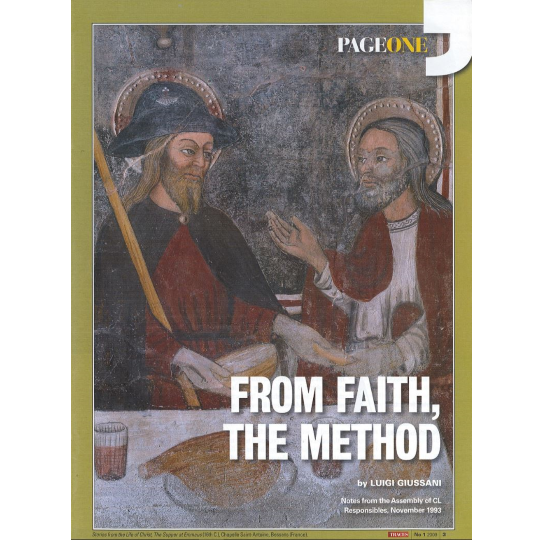 A question of method. Our companionship is defined by a method. It can be said that the “genius” of our Movement lies entirely in its method. It is, first of all, an educative “genius,” since the method is the road by which a man achieves awareness of the experience being proposed to him. It is precisely by safeguarding the authenticity of the method that the content of our experience can be transmitted.

The origin of the Christian method is faith.
The method has its origin in faith, which is the acknowledgment in your own life of an exceptional presence that you see as important for your destiny. Faith comes to fills the entire horizon of your life, through the relationship with a presence that corresponds to your heart. It should be normal for everything that happens to correspond to your heart, but this isn’t so. Without the encounter with an exceptional presence, it is impossible to escape the tragic observation that there is “nothing new under the sun.” The source of the method is the “impact” with an unforeseeable and great presence, which reason recognizes as, literally, “superhuman.”

The essence of the method, therefore, is to follow the personal reality that introduces you to the event of an exceptional presence. Sequela, following, is the most reasonable attitude before the Christian event.

Today’s culture holds that it is impossible to know, to change oneself and reality “merely” by following a person. Our era cannot conceive of the person as an instrument of knowledge and change, because these factors are understood reductively, the first as analytical and theoretical reflection, the second as praxis and application of rules. Instead, for John and Andrew, the first two who ran up against Jesus, it was precisely by following that exceptional person that they learned to know differently and to change themselves and reality. From the moment of that first encounter, the method began to unfold in time.

Evidence and freedom. The evidence of the exceptionality of the Presence, encountered by John and Andrew, manifests itself in the instant and captures for eternity. On the other hand, conviction matures over time. To the people, Jesus appeared as the one “accursed” by the doctors of the Law, the one proscribed by the scribes and pharisees, the “suspicious” individual of whom everyone spoke badly. And yet, for those same people, it was evident that He corresponded to their hearts more than His denigrators. It’s a matter of evidence, an evident correspondence to the heart that cannot be the object of further “arguments.”
Therefore, the evidence happens in the instant–to John and Andrew who watched Him speaking, it was evident that that man corresponded unexpectedly (exceptionally) to their hearts–while conviction is the fruit of time, in other words, literally, of a repetition, a continual question, a repetition that “persuades.” It’s worthwhile to underline here that freedom adheres or withdraws at the moment of evidence. Over time, then, the position freedom has chosen before the evidence is revealed: closure or openness. Everything depends on the original position before things: whether a man has his eyes wide open, or whether he’s like a capricious child who covers his face with his hands. What happens in life inevitably brings to the surface the position chosen or taken in the beginning. As Saint Thomas said, “The life of man consists in the affection that principally sustains him and in which he finds his greatest satisfaction.” And Romano Guardini added, “In the experience of a great love, everything that happens becomes an event in its sphere.”

An imitation, over time. A term that contributes to specifying the nature of the method is the word “imitation.” It describes the great law of nature, at every level. God, first of all, in creating man, said, “Let us make man in our image, after our likeness” (Gen 1:26). And Jesus introduced the same dynamic, turning to His disciples with these words, “So be perfect, just as your heavenly Father is perfect” (Mt 5:48). This is humanly impossible, and yet this striving toward imitation summarizes the entire moral law of the Gospels.

Following is following, not succeeding. Imitating is imitating, not achieving. The method of sequela and imitation implicate the concept of “becoming.” Therefore, the method involves time.

Imitation is done through comparison, which isn’t a duel between two lines of thought, or the search for approval, but the continual request for correction.
Incidentally, it’s worthwhile to point out the importance of these notes in order to understand the very concept of “education,” whatever sphere it may be applied in. Mercy and forgiveness are the boundaries of a new educative relationship. The genius of Christianity lies in the announcement that God has made Himself a factor imminent in all of man’s experience, even that of sin. Mercy and forgiveness are like the divine seed that from human error can regenerate life.

An irrational temptation. That which makes the initial evidence emerge, the event, does not belong just to the initial moment, is not depleted there, but is present in every moment of the development. Therefore, following implies repetitiveness. It’s not a matter of an automatism. Life conceived in this way is formed of acts that, over time, become more aware, more charged with awareness of faith and, thus, of humanity. The temptation is to “detach ourselves” from this following, out of the presumption that we already know what we are asked to follow. In this way, we fall into partiality, refuse correction, and suspend our striving toward fulfillment.

The grave error is to suspend the method, thinking we can replace it with our own ability. It’s an irrational act. If reason is the consciousness of reality according to the totality of its factors, any partiality destroys reason and the method.

Virtus: obedience. Virtus, the moral attitude in the walk of faith, is obedience. It expresses itself as sequela of an exceptional presence encountered, and is marked by two characteristics:
a) the exceptional presence communicates itself to us through a human reality, the Church, through a companionship generated by the faith of a man;
b) precisely because the presence that one follows is human, it inevitably expresses its own points of view and temperaments, different from those expressed by others. This “variety of Incarnation” encompasses and expresses what we call charism: “the terminus” of the great mystery of the Incarnation. The Christian event, the fact that God has become incarnate, entails and establishes a human reality with certain characteristics, establishes a place through which He reaches me by the working of the Holy Spirit.

Therefore, obedience constitutes the virtue proper to following, and its test is when you have to follow a certain man, a particular companionship. It isn’t obedience if it doesn’t follow the exceptional Presence in the concrete terminus (charism) in which It makes Itself present. In this test, you understand the meaning of the expression, “There is no greater sacrifice than giving your life for the work of an Other.” Obedience: no word more clearly expresses the merit of the man-Christ, obedient to the point of the supreme contradiction. Christ, in fact, “humbled Himself, becoming obedient to death, even death on a cross” (Phil 2:8).

The possibility for our companionship to benefit the Church and society doesn’t depend on what someone manages to do according to his own genius, but on the willingness to do the “Work” of the Spirit. Obeying the Spirit ultimately means obeying a man, a human reality–fragile and incoherent as it may be–who has been chosen by God as the terminus of the Incarnation, as the charism that exists in function of the totality of the Church.

From faith and obedience, understood and lived in this way, springs forth a new people. Obedience, in fact, ensures the nuptial unity that generates children. The barren one who obeyed has become the generator of children.