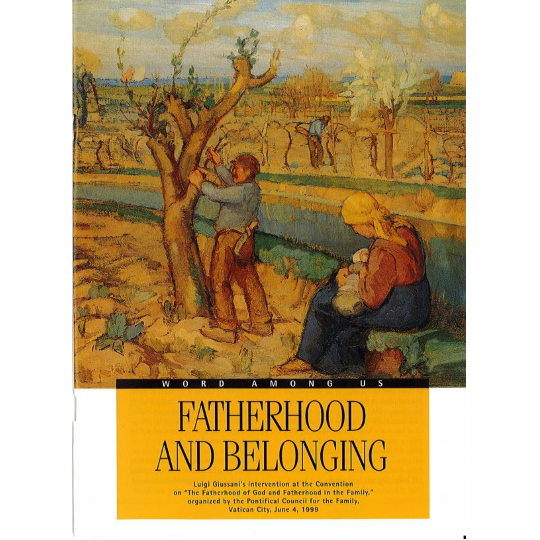 "For it is You who created my being, knit me together in my mother's womb. I thank You for the wonder of my being, for the wonders of all your creation. Already You knew my soul, my body held no secret for You, when I was being fashioned in secret, and molded in the depths of the earth. Your eyes saw all my actions, they were all of them written in your book, every one of my days was decreed, before one of them came into being." (Ps. 139:13-16)

Man depends, not only in some aspect of existence, but in everything: anyone who observes his own experience can discover the evidence of a total dependence on an Other who has made us, continually makes us, and keeps us in being.

The Bible describes man's belonging to his Creator with wonderful words. The creature's dignity is expressed by Psalm 8: "What is man that You remember him, the son of man that You care for him? Yet you have made him little less than Yourself, with glory and honor You have crowned him." It is in man that God's fatherhood for the whole cosmos is manifested: a fatherhood for man as the conscious and free apex of creation.
Man was not, and now he is; tomorrow he will be no more; and so he depends. He either depends on the flux of his biological and historical antecedents, in which case he'll be slave to power, or he depends on That which is at the origin of all that's real, therefore on God.
Modern culture, that has expelled tradition from its horizon of thought and action, has destroyed the value of belonging, substituting for it a freedom as non-adherence to the Father, and thus becoming a source of falsity.

If belonging to God is there, it is impossible not to perceive what God has done before us: the Father who is in heaven and the historical father and mother who gave us life.

The first belonging, both physiologically and socially speaking, is that to the parent. God is given to us through father and mother.

On every page of the Gospel Jesus of Nazareth, Son of the Father, shows God's infinite fatherhood as the deep root of His working in the world. As for instance that day when He strode through the fields of Palestine with His disciples, and passing through Nain He came across a funeral: a widowed mother was going to bury her son. Jesus approached her and said words that no one would have been able to conceive of in those circumstances, "Woman, don't weep," embracing her, as it were, with boundless tenderness. Immediately after that, He gave her back her son alive. (cf., Lk. 7:11-15)

What can a father and mother wish more than to be able to look at and deal with their children with this gaze on what is human, in the imitation of Christ? Then, what is implied by the fact that a man and a woman want their union to be "blessed" by Christ and thus to become a Sacrament? This implies that the unity of their persons is understood and lived in function of God's Kingdom, and therefore of the human glory of Christ. Life itself is given us for this. The expression "human glory of Christ" means that the Mystery makes itself in some way visible, tangible, perceivable, experienceable because of a new reality that is created in its name.

The family is the locus of education in belonging, of education to the experience of fatherhood and, hence, of motherhood. In the family it is evident that the fundamental element in development of the person lies in the mutual, conjugated belonging of two factors: man and woman.
It is in the family that true belonging reveals itself as freedom, for true belonging is freedom. Freedom is that capacity to adhere-to the point of identification and assimilation-to what makes us be, to our Destiny, and it is made possible by our bond with it. The first aspect of freedom is affirming a bond; otherwise one does not grow, for he stops assimilating.

Were we to use our consciousness fully, were we to reflect on ourselves, no longer as children but as adults, what would be the most impressive evidence? That in the given instant I am not making myself. So I am "something-else-that-makes-me," I'm like a gushing spring. Thus to say "I" with awareness is to say "You," the most dignified and human word in the dictionary. In this instant, I am "you-who-make-me."

In order to educate in this sense of belonging that defines the human person, a process of osmosis is necessary, or an "exemplary reflection," to use another metaphor. That is to say, education in belonging takes place if the awareness of belonging to someone else is transparent in the parents. When it is in the parents, this awareness is transmitted to the children. Not through speeches: without that osmotic pressure, without "exemplary reflection," speeches create only obstacles in the consciousness of the listener, of the child.

So what attitude does one need to have toward a child? The dominant word, absolutely not abstract, is "gratuitousness."

This is first of all a gratitude for generation, the full acceptance that that child belongs to you. Secondly, it is giving the child back to the Other, to That of which the child is constituted and to which he belongs totally, such that this belonging will constitute his personality. In a nutshell, it is the parents' attitude of adhering to What constitutes the person of their child: relationship with Being, with God.

I cannot forget an experience from my early years of priesthood. A lady used to come for confession every week, but one day she stopped coming. After some time she came back and said, "You know, I did not come, because I had a second baby daughter." Even before I had time to congratulate her, she added, "You don't know how impressive it was for me, the moment I felt her detach herself, I didn't think, 'It's a baby boy' or 'It's a girl' but, 'There, it's beginning to go away.'"

Saying the child is going away is tantamount to saying it is growing, so much does it belong to an Other. In this process, the original attitude of gratuitousness can live out the separation as an opportunity for acknowledging one's son as something other, something always different from the way one imagined him to be. If on the contrary gratuitousness fails, a rancor creeps in; as the child goes away the rancor will increase your loneliness. Thus the belonging of the child to the parent is demanded by the latter with an attitude of recrimination, harnessed in a scheme.

Today, unfortunately, almost everybody has a concept of family that does not imply the whole of the factors in accordance with God's plan, as the Lord revealed them to us through Jesus. Those who never heard of Jesus cannot think of a pattern of family that is different from the world's. Children can be generated without any awareness of their destiny, just as an animal gives birth to its young. You are not father and mother because you produced children, but because, having produced them, you educate them, that is, you help them walk toward their Destiny. Without this lived responsibility there is no fatherhood or motherhood.

What is the method that expresses the whole educational process as fatherhood? That of experience: that the child may realize the experience of living, of his own "I." It is only a lived personal experience that saves one's belonging to an Other from being alienation, and therefore ensures identity, so that belonging to an Other is one's own identity.
This educative itinerary, that is called experience, has a dynamism:

a) Proposal, or the assimilation of the tradition of one's own parents.

b) Leading by the hand, or the introduction into a concrete reality that the child can assimilate. It is the most delicate point.

c) Working hypothesis. We are talking of a human work, so we are referring to a hypothesis of meaning. This is tradition assimilated (that is, knowing and accepting the reasons for it).

d) Risk, which is something destined to increase in time, precisely because belonging is a bond and a responsibility. The proposal, the leading by the hand, and the working hypothesis as meaning must be offered and actualized with discretion toward the child's freedom and responsibility (both of which are evolving).

e) A stable companionship, that means fidelity. God is faithful. St. Paul observes that even though we are unfaithful, God remains faithful, for He cannot deny Himself. (cf., 2Tim. 2:13) The experience of fatherhood in the family is realized as reliable companionship to the children, as discreet fidelity, ever ready to intervene, vigilant over them. A faithful companionship, therefore, and forgiving to the end: it is what we learn continually from the boundless paternity of God toward us.

It is what in Claudel's The Announcement Made to Mary the old father, Anna Vercors, affirms when saying to his daughter Violaine, "The Father's love asks nothing in return, and it is not necessary that the child should win it or deserve it. As it was with him before the beginning, thus it remains: his good and his heritage, his refuge, his honor and justification."

This text was published in Tertium Millennium (July 1999), the official publication of the Central Committee for the Great Jubilee of the Year 2000, as well as in the Italian daily Avvenire (August 3, 1999).