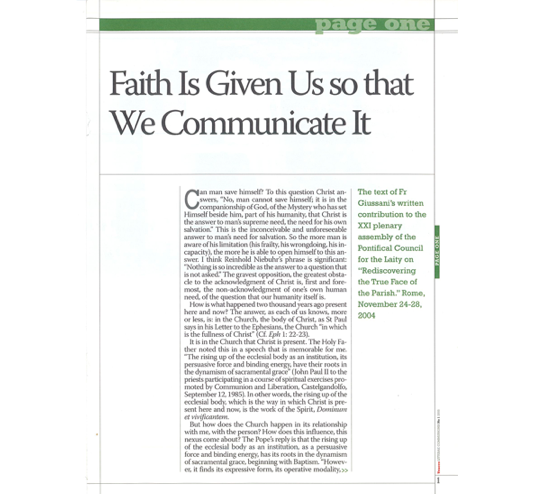 Can man save himself? To this question Christ answers, “No, man cannot save himself; it is in the companionship of God, of the Mystery who has set Himself beside him, part of his humanity, that Christ is the answer to man’s supreme need, the need for his own salvation.” This is the inconceivable and unforeseeable answer to man’s need for salvation. So the more man is aware of his limitation (his frailty, his wrongdoing, his incapacity), the more he is able to open himself to this answer. I think Reinhold Niebuhr’s phrase is significant: “Nothing is so incredible as the answer to a question that is not asked.” The gravest opposition, the greatest obstacle to the acknowledgment of Christ is, first and foremost, the non-acknowledgment of one’s own human need, of the question that our humanity itself is.
How is what happened two thousand years ago present here and now? The answer, as each of us knows, more or less, is: in the Church, the body of Christ, as St Paul says in his Letter to the Ephesians, the Church “in which is the fullness of Christ” (Cf. Eph 1: 22-23).
It is in the Church that Christ is present. The Holy Father noted this in a speech that is memorable for me. “The rising up of the ecclesial body as an institution, its persuasive force and binding energy, have their roots in the dynamism of sacramental grace” (John Paul II to the priests participating in a course of spiritual exercises promoted by Communion and Liberation, Castelgandolfo, September 12, 1985). In other words, the rising up of the ecclesial body, which is the way in which Christ is present here and now, is the work of the Spirit, Dominum et vivificantem.

But how does the Church happen in its relationship with me, with the person? How does this influence, this nexus come about? The Pope’s reply is that the rising up of the ecclesial body as an institution, as a persuasive force and binding energy, has its roots in the dynamism of sacramental grace, beginning with Baptism. “However, it finds its expressive form, its operative modality, its concrete historical incidence, through the various charisms that characterize a temperament and a personal history” (Ibid).
The Pope calls “charism” the mode with which the Church takes up expressive form in a concrete, historical detail. The expressive form implies a determined, concrete, historical detail, and remains abstract if not considered up to this point. Its concrete historical incidence is realized by means of the various charisms that characterize a temperament and a particular history. Let’s keep in mind that the word “charism” has the same root, charis, as the word “grace,” and points to the energy with which the Spirit, in its intervention, recreates the follower of Christ. If it were not to become concrete, adequate to my temperament and to my history, the Church would remain abstract.

Let us imagine a parish with three thousand inhabitants and only one priest. He tries his best every Sunday from the pulpit, but leaves the faithful indifferent. In this town, the faith languishes; people go to Church in virtue of memories that still live on. Those who have a bit of life in them owe it to a personal piety. That priest is an ineffectual personality, so he is transferred–he gets a promotion. Another priest comes; he has more seniority, but he is sent there because he has fallen out with the Curia. On the first Sunday, he preaches at Mass, and immediately five people out of the five hundred or so present are struck by what he says, and feel the need to get more involved with the Church and with the faith. Imagine that those five people go separately to the new priest and tell him, “Listen, I was moved by what you said on Sunday and I realize that the faith has to involve my life and I want my life to be involved in the faith.” So, since there are few structures in the town, the priest says, “Let’s get together and form a small pastoral council.” He will try firstly to nurture this small group, and with their help he will try to tackle the problems in the parish. As two of them are man and wife, and rather well-off, since he is a doctor and she a teacher, they set up some initiative in the town, perhaps a small health center to help poor people, or a study group for youngsters. Then some more families join them, and after some months the parish is changed beyond recognition. There is an intense participation in the Church’s life and a great familiarity between the priest and his people; there is a kind of vibration of hope in those people, a desire to get to know the faith and the Church’s teaching that was not there before. This happened because the priest who went there had a personality, a sensitivity, a temperament and a personal history that got things moving, that created movement. What happened is called “movement.” With the previous parish priest it didn’t happen. It was not for any fault of his, but because the times of the Spirit are the times of the Spirit. So, in the case of the second parish priest, a charism was at work and a charism is characterized by historical incidence.

Without the movement I have tried to describe, a parish is arid and remains a mere institution. I have told my friends many times about my late mother and her priest, Fr Amedeo, in Desio. Through his presence in the confessional, more than through the youth center, he created a reality of hundreds of women, all from Catholic families and devoted to the parish, all Children of Mary. They would go to Mass at five o’clock every morning, and were always ready to help when the parish needed something. Everyone in the parish knew them. That priest in his confessional had created a movement in the parish, and in the town. If there had been a hundred thousand instead of a hundred of them, even the Corriere della Sera would have written about them! Fr Amedeo, the curate in my huge parish sixty years ago, guided so many young people to Christian maturity, who then went on to bring up so many sound Christian families, and they were always ready to help the parish priest when he needed it.
With this example, I wanted to stress the absolutely personal nature of the way in which Christ, present here and now in the reality of the Church, becomes expressive, persuasive, educationally effective and constructive; able to build up a people.
So, I believe the Pope introduced the term “movement” as an ecclesiological category fundamental for describing pastoral dynamics.

Thus the word “movement” is not a problem that touches me particularly because we constitute a movement recognized by the Church, but is rather something that indicates a permanent mode in the Church’s history through which the faith becomes persuasive, educationally effective and constructive, and brings a change in life. This appears clear when we read St Paul’s letters, which mention Aquila and Prisca. The Spirit came down into the hearts of people who went to each others’ homes through a personal temperament and history. If we don’t understand this origin of a movement, we are unable to grasp how the institution we have in our hands–a parish, an association, or a group–can become alive, and so we can first become pretentious, and then disgusted and cynical, without hope. For example, if I, as a parish priest, have people coming to me saying, “We want to work with you,” and see that they are enthusiastic and fresh thanks to something that has moved them (perhaps the encounter with a movement), the first thing I must desire is that they deepen faithfully what has aroused them, the experience that has struck them. Only in this case can the parish community benefit.
The aim of all that happens in the Church is to adhere to Christ so as to make His victory over the world present, and thus to anticipate the end of the world.

This phrase stresses the doctrinal content, from an existential point of view, the living object of faith, adhesion of life: “Whether you eat or drink, whether you wake or sleep, whether you live or die” (Cf. 1Thess 5:10)–in other words, everything–so that the world may be ever more imbued with the miracle of a witness, that is to say, that the world may acknowledge Him more and more. This is mission. Christ Himself has already defined the reason for which He came in Chapter 17 of John’s Gospel, “I came that they may have eternal life: and this is eternal life, that they know You, the one true God and Jesus Christ whom You have sent” (Cf. Jn 17:3-4).
The aim of the faith we have been given is the mission, and the mission is not for the Hereafter, but for here and now. This is the category of our relationship with the world, whose first aspect is in us; it arises from the astonishment of feeling ourselves created alive.
The more a parish finds priests and faithful for whom the surprise of the Christ event, encountered and acknowledged, becomes the all-embracing horizon for thought and action and impassioned love for the mystery and for the destiny of their fellow men, the more the parish will be alive.

So the word “movement” describes the existential historical way in which the Church becomes a living Church. I believe that a priest who has a parish, or a priest who has a community of a movement, and doesn’t pray the Spirit and doesn’t tend to arouse some reality of “movement,” will leave the Church like a tomb. The only thing that will be left of his parish will be the office, and the only thing that will be left of the community will be a group with a purely psychological or sociological value.
If a parish is alive, it is a movement, in the sense spoken of by John Paul II: “The Church herself is ‘a movement’” (To the participants in the Convention “Movements in the Church,” Castelgandolfo, September 27, 1981). So, the theme of movement is in no sense an alternative to the institution, but indicates the way in which the institution becomes alive and missionary, because the faith is not given us in order that we preserve it, but in order that we communicate it. If we don’t have the passion to communicate it, we don’t preserve it.