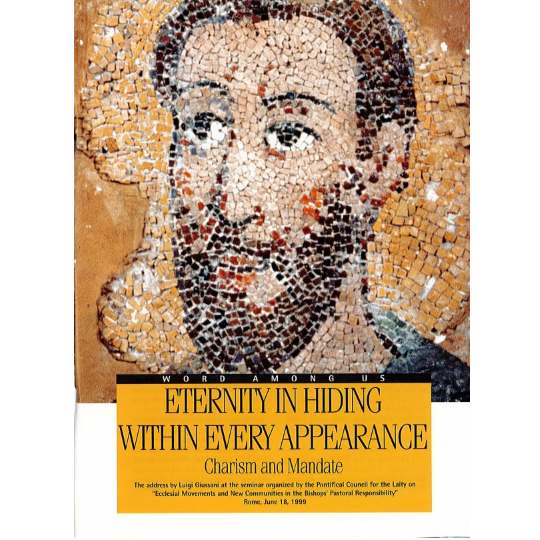 1. For someone who is Christian and loves the Church with his whole self, as it is, and as his mother taught him to love it, there is an inevitable scandal at seeing a sudden and continuous reduction in the number of people attending Church, as the information of the mass media would have us believe today.

2. How can we not be tempted to think that something is not well? And this can not be moralistically ascribed to the freedom of the individual; it can arouse in the heart the impression that unfaithfulness to the Spirit may touch even some expressions of those who teach the catechism and, trusting in certain values and opinions of our de-christianized climate, this can even be judged to be a sign of the times, rather that be read in the mystery of Christ. This "something" that is lacking cannot regard the nature of the gift of Christ. It is not a defect of the origin!

It is a question rather of a reduction of what Christ wanted to bring about among men, all weakened by original sin: this is why Christ came.

So the decision to follow Christ can be taken by men who consider their dedication to the Church in the light of earthly power, which sustains the origin and the dynamics of all, even of non-Christians; and thus the lack of the sense of the Mystery de-natures the very event of Christ.

In fact it was possible to be faithful to the letter of Tradition without being educated in a Christian methodology that knew what are the fundamentals of all that there is in the Church.

3. Thinking of the beginnings of my own history, I would like to observe that the stimulus to novelty came, in me, precisely from within fidelity to Tradition, to the teaching and the praxis of the Church. I joined the seminary still very young, convinced of the need for Communion and Confession as a consequence of Baptism. I was a young seminarian, an obedient, exemplary boy, until one day something happened that changed my life radically. It was when one of my teachers explained to me in the seminary the first page of John's Gospel: "The Word of God, that is to say the expression of the need of the human heart, in other words the ultimate object of the desire of every man-happiness-became flesh." My life was literally bowled over by this: both as memory that kept on striking my thoughts, and by the stimulus to re-evaluate the day-to-day banalities. From that moment the instant was no longer a banality for me. All that was, therefore all that was beautiful, true, attractive, fascinating, even just as a possibility, found in that message its raison d'être, as the certainty of presence in which there was hope to embrace everything.
What made me different from those who surrounded me was the will and the desire to understand. This is the soil from which our devotion to reason springs.

4. I set to work with students because the relationships I'd had, right from when I was a teacher in the seminary, were all with students. It was not the choice of a particular environment to which to speak about certain things, I just found myself there.

Just as I came across those three boys on the train, one day, on the way to Rimini. I didn't know them, and I found them awfully ignorant and full of prejudice about the Christian fact. This was the reason that pushed me to ask my superiors to leave the teaching of theology in order to devote myself to a work of presence amongst the students in the Milan schools.

The things I told them were born not of an analysis of the student world, but from what my mother and the seminary had told me. It was a question, in short, of speaking to others with words dictated by Tradition, but with an awareness that was visible, right down to the methodological implications.

What I did I would have done in any other part of the Church! What I felt and saw was like a new way, not sensed before, except in the texts of the Fathers and the Popes. This realization was born of an experience. I was giving a new reading of the words of the Gospel itself and of Tradition.

The difference between integralists and traditionalists and us is that, while they, in order to safeguard the old form, wanted to call the others back to the old form (and imitate their forefathers mechanically), what we wanted, precisely in order to safeguard tradition was to understand its content, to show its justice and to exemplify it. I "understood," and others with me, that Christ was there, present.

5. I tried to make myself clear and to explain this grace of knowledge and reflection that I'd had. Many times I felt not accepted by the parishes and by official associations, but for me the image I was getting gave me a joy and a certitude of the Christian fact beyond compare and it made it a fact that filled the whole heart in an openness to the whole reality of the Church in the world. And this certitude, this hope and this openness was reflected in the young people who had begun to follow me. It was the emerging of a way of feeling the presence of Jesus in the Church as the complete and all-embracing answer to the questions of the world.

I realized many years later, precisely in the looked-for and loved confrontation with the Church authorities, that my desire, the passion that I felt in my heart for this newness of life were a particular grace of the Spirit, called charism. Charism appeared to me clearly to be the concrete way in which the Spirit brings, to be born in the heart of man, an understanding and an adequate affection for Christ in a given historical context. And the one who receives it "must" share in Christ's mandate: "Go into the whole world!" From the gift given to an individual an experience of faith begins that can come to be in some way useful for the Church.

I understand that a person may feel one way of expression to be more interesting than an other, but there may be a way in which the charism translates or communicates with clear awareness what St. Paul affirms of the new creature; not just of the new intelligence or of a new heart of charity, but of the new creature in its entirety! And this through a stress on that which is the Christian method. Just as God has made Himself present to man in Jesus of Nazareth, so our formula for feeling the Protagonist of this history vibrate is to verify Him as a wholly human Presence and, therefore, the origin of something that in its wholeness, in becoming the source of a new man, becomes the source of a new society.

6. The dynamics of acknowledging and verifying the Presence of Christ makes one in any case become creative and protagonistic and makes one discover how the activity of a Christian is of its nature missionary; that is to say, participating in the very mission of Christ who created the Church in order to make Himself known in all the world. The aim of Christian existence is therefore to live for the human glory of Christ in history.

So we love all the forms that the Church acknowledges and we are ready, within our limitations, to collaborate with any initiative. We cannot fail to conceive whatever we do as mission, the ultimate destiny of every action.

Our certitude, the source of joy, is belonging to the Church, on whose authority we depend, just as it expresses itself at all levels, asking to be recognized, ready for sacrifice, even for that of life itself, but first of all ready at all times to convert our minds and hearts away from a worldly mentality.

7. This is why our moral conception, by acknowledging man's subjection to original sin, desires, in deep sympathy for Christ present, to pass through the appearances of all things in order to affirm its ultimate meaning, so that the relationship with everything be lived as a sign and invitation to Destiny.
The Christian is thus a man who perceives eternity in hiding within every appearance.