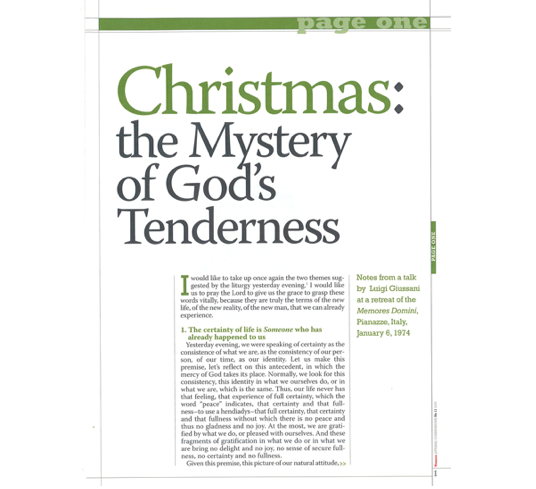 I would like to take up once again the two themes suggested by the liturgy yesterday evening.1 I would like us to pray the Lord to give us the grace to grasp these words vitally, because they are truly the terms of the new life, of the new reality, of the new man, that we can already experience.

2. Tenderness: God identifies
Himself with our flesh
Here, then, is a consequence, which is like the second step in this first word, the certainty that the liturgy speaks to us during these days; certainty and fullness of ourselves not in what we do–which achieves only a short-lived gratification–but certainty and fullness in what has happened to us, that brings us gladness and joy.
The second step, what lies at the root of this gladness and joy, is the word “tenderness,” because Christmas is the mystery of tenderness, God’s tenderness to me. It is a tenderness that is not gratification in the feeling we have for God or for Christ, because gratification in the feeling I have is still what I said at the start, that is to say, gratification in what we do ourselves. Tenderness is not gratification in the feelings we have, but abandonment, feeling oneself taken over by the love that has taken hold of us, by Him who has taken hold of us, feeling ourselves taken hold of by this Presence, feeling ourselves taken hold of by what has happened, the presence of what has happened.
It is like when a child opens his eyes wide and is all filled up with what he sees and has no room to give to the feeling he has, or the awareness of a feeling he has; before what he sees, he is all filled up with what he sees. “Se diligit homo tantum propter Deum,”11 man loves himself only for this that is before him, in Christ, in this that he has before him, in this event.
But what I want you to focus your attention on is the word “tenderness,” because this identification, this God, this Word, this Mystery, who identifies Himself with our flesh, this incarnate Word, this divine flesh, this Man who identifies Himself with us, with me, is a tenderness a million times greater, more acute, more penetrating than a man’s embrace for his woman, or the embrace of a brother.
We do not understand these things by reasoning, but by looking at the words that synthetically indicate the experience we want to evoke; and so it needs more than one word. We have to look at this word–tenderness–within the awareness of this identification between me and You or, better, between You and me, within the awareness of this event that has taken its place in me, of this “You who are me.”
Here, too, the religious instinct, urged by the Christian terms in which it was born, made Dostoevsky feel many correct things. In The Brothers Karamazov, he has the young monk say this: “In his ardent prayer, Alexei did not ask God to clarify his disquiet [he was in a moment of temptation], but longed only for that joyous tenderness, that tenderness that had never failed to visit his soul after the praise and exaltation of God, which was usually the content of his prayer before going to sleep. This joy, which usually visited him thus, brought after it a light, tranquil sleep.”12
It is true that the characteristic of all true intuitions, without that balance that is only in the experience of the Church–the true Church of Christ, the Church of Rome, the Catholic Church–is always an excess, something unilateral, an exaggeration, as if, in order to exist, that joy must always bring after it a “light and tranquil sleep” or that this tenderness be necessarily a particular sensitivity after the “praise and exaltation of God.” But while there is the possibility of an exaggeration, of an “overflow” (like when milk boils over in the pan), the observation is essentially correct, and I hope each one of us can vouch for it. “In his ardent prayer, Alexei did not ask God to clarify his disquiet, but longed only for that joyous tenderness, that tenderness that had never failed to visit his soul after the praise and exaltation of God.”
This tenderness is indicated in a more consistent and concrete way, more “actively” in the last words of St. Clare to her soul in the moment of death. “Go in peace, because you will have a good companion, since He who created you, destined you for holiness, and when He had created you, He infused the Holy Spirit in you; and then He looked at you as a mother looks at her little child.”13
These words collapse immediately if they remain outside what we said, if in some way they cease to be or are no longer clearly what they are–that is to say, the sign of what has happened–because our certainty and our fullness, our identity and our consistency is something that has happened. It is Someone who has happened to us and told us, “Come with Me, come and follow Me,” as in the first chapter of St. John’s Gospel, from verse 35 to the end, identifying Himself with John and Andrew, with Simon son of John, with Philip and Nathaniel. Do you realize that, in that moment of the Gospel we read yesterday evening, what Nathaniel had before him was so intrusive that it took away all the attention he had for himself, exactly like a child who has his eyes filled up by what he sees?