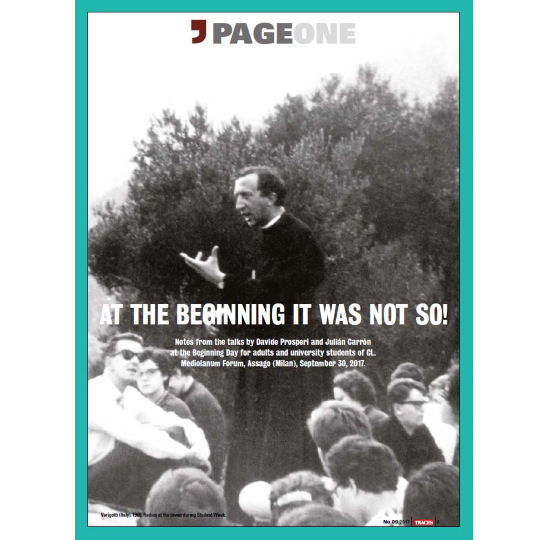 Let’s ask for the poverty that we desired many times this year as we reflected on Manzoni’s “Unnamed,” because without it we lack the disposition of heart for beginning, and everything becomes useless. Let’s ask for it by singing the hymn to the Holy Spirit.

Come Holy Spirit
The Things that I See
Negra Sombra

Welcome. First of all we would like to greet everyone present and those following us in other cities in Italy and abroad for this moment with which we want to begin the year. I would like to begin by asking again the question from the Spiritual Exercises of the Fraternity that was our focus this summer: “Has salvation remained interesting for me?” This word, salvation, so often forgotten in the face of the difficulties, inconsistencies, and burdens of living, has suddenly become familiar to us again. The word salvation conveys all the sense of our own limit, our own evil, let’s even say our own nothingness, and this notwithstanding the aspiration for a realization of goodness and greatness that our hearts feel we are made for. However, salvation seems unreachable for us because we feel undeserving (at least those who have a minimum of self-awareness must have thought this at some point) and it seems that all our efforts are insufficient to earn it. Instead, the hypothesis of Jesus in front of Zacchaeus, as Carrón said at the Spiritual Exercises, completely overturns the question. Luke’s gospel says, “Today salvation has come to this house” (cf. Lk. 19:1-10). Salvation is Christ, His person, and we have been caught by His gaze, which changed us. It did not necessarily change our interests immediately, nor did it immediately give us the ability to never make mistakes again, or even just to correct ourselves. What changes first of all is that we are aware of His presence, through an attraction that erupted into our life and magnetized us to Him. The gratuitous generosity of the young people who spent hours under the beating sun directing traffic in the Meeting parking lots, or that of those who kept the halls and exhibit areas clean (and paid for the privilege!) which struck everyone, cannot be understood if you think it is merely the fruit of an effort to be generous. This gratuitousness is possible only if you are already satisfied because of what you have received. Gratefulness is what I saw shining in the eyes of those young people, just as you see in many adults already engaged in society. You see it shining because it is the expression of a present event, which maybe is happening now for the first time in the life of a person or that has happened anew after many years. I’ve seen it travelling to the many vacations and gestures we have done this summer.