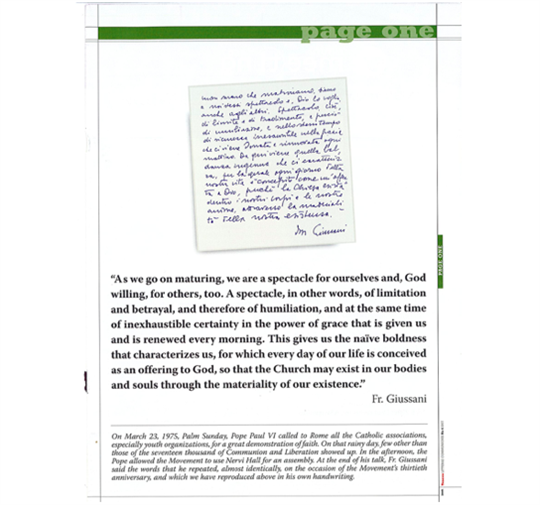 On March 23, 1975, Palm Sunday, Pope Paul VI called to Rome all the Catholic associations, especially youth organizations, for a great demonstration of faith. On that rainy day, few other than those of the seventeen thousand of Communion and Liberation showed up. In the afternoon, the Pope allowed the Movement to use Nervi Hall for an assembly. At the end of his talk, Fr. Giussani said the words that he repeated, almost identically, on the occasion of the Movement’s thirtieth anniversary, and which we have reproduced above in his own handwriting.

“As we go on maturing, we are a spectacle for ourselves and, God willing, for others, too. A spectacle, in other words, of limitation and betrayal, and therefore of humiliation, and at the same time of inexhaustible certainty in the power of grace that is given us and is renewed every morning. This gives us the naïve boldness that characterizes us, for which every day of our life is conceived as an offering to God, so that the Church may exist in our bodies and souls through the materiality of our existence.”
Fr. Giussani